Films chronicling the sufferings of indigenous people and films dealing with self-willed independent girls (Girlhood, Mustang) are nowadays being made with great sense of visual acuity and consequently receiving immense critical praise (and interestingly many of these movies are directed by women). Sami Blood gracefully blends in both these story arcs, similar to Jayro Bustamante’s Volcano (2015) and Claudia Llosa’s The Milk of Sorrow (2009).

Institutionalized racism has long been the predominant tactics of colonizers to quell the indigenous races, who in the due course become persecuted ‘minorities’. Negative stereotypes, assimilation methods and subtly dispersed ethnic bigotry are all part of the systemic cultural suppression. If one indigenous generation’s cultural roots are expertly uprooted, it gradually leads to the coveted end result of homogenization. But despite the homogenization the cruel gaze of the allegedly ‘superior’ race stays the same. The isolation and anger of the subsequent generations of indigenous people also remains the same. Swedish film-maker Amanda Kernell’s highly impressive debut feature Sami Blood (‘Sameblod’, 2017) depicts such little indignities inflicted on an indigenous girl.

The Sami People (or Lapps) are one of the northernmost indigenous groups of Europe (they are the only indigenous community of Scandinavia to be recognized by The Indigenous and Tribal Peoples Convention). The Sami people are semi-nomads who are well-known for reindeer-herding. Currently, the Sami population is under 3,000 in Nordic countries and few of them are allowed to herd reindeer in the legally preserved sanctuaries. Director Amanda Kernell was born to a Sami father and Swedish mother. She says the film is ‘declaration of love to the elders in my family and their generation’. ‘Sami Blood’ also happens to be the first feature film to use South Sami language (people speaking the language are less than 500 in Sweden). 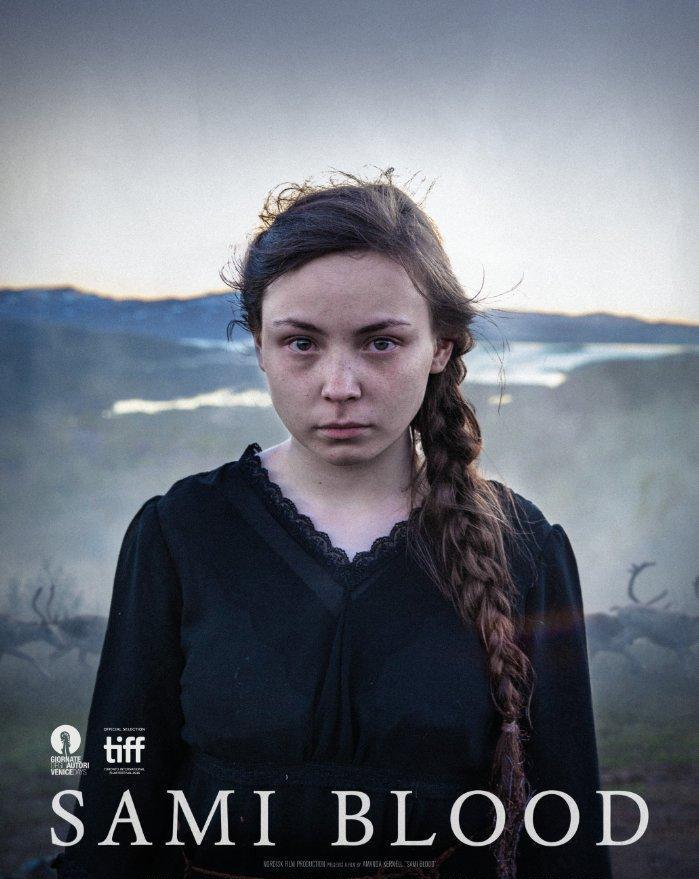 Films chronicling the sufferings of indigenous people and films dealing with self-willed independent girls (Girlhood, Mustang) are nowadays being made with great sense of visual acuity and consequently receiving immense critical praise (and interestingly many of these movies are directed by women). Sami Blood gracefully blends in both these story arcs, similar to Jayro Bustamante’s Volcano (2015) and Claudia Llosa’s The Milk of Sorrow (2009). Director Amanda Kernell went to the National Film School of Denmark and been involved with film industry for nearly a decade. What’s fascinating about her film is the meticulous cultural research that has went into making this. Before directing a full-length movie, Amanda made a pilot short film titled ‘Northern Great Mountain’ which premiered at Sundance in 2015. She says it provided her the perfect visual standpoint to approach this tale.

Sami Blood opens with a profile shot of Christina (Maj-Doris Rimpi), a retired teacher with sullen looks. She joins her son and granddaughter to attend younger sister’s funeral at the homeland. Christina is ill-at-ease during the ceremony, brushing off the odd pleasantries with a frown. She stays alone at a hotel, overlooking the picturesque plateaus which once happened to be her home. The narrative then shifts to a long flash-back, set in the 1930s, to scrutinize the reasons for Christina’s self-imposed isolation. It was the time when the 14 year-old Christina was belovedly called as Ella-Marja (Lene Cecilia Sparrok) by her proud mother and playful little sister Njenna (Mia Erika Sparrok, Lene’s real-life sister). The world around the family’s reindeer camp is gorgeous. They yoik (traditional throat singing), brand the reindeer, and run around the shiny fields, before getting ready for the trip to boarding school. The remote state-run boarding schools are exclusively for Lapps or Sami children, where they learn about Swedish culture and the language.

The students cloaked in beautiful traditional dress are daily paraded from their boarding house to school through the woods, taking in the harshest comments and reproachful gazes of the local people. The classes are run by a good-looking yet mildly prejudiced young teacher (Hanna Alstrom). In the school, the students are forbidden to communicate in their native language. While Njenna finds it hard to fit in, Elle-Marja comes top of the class and looks up to her teacher. Elle-Marja’s dream is to be a Swede, move to the city of Uppsala for higher studies and to eventually become a teacher. The first blow to the girl’s self-deception and dreams of assimilation arrives with the group of well-dressed anthropologists. Elle-Marja proudly welcomes them in Swedish without any idea of the horrific indignity that’s about to follow. The blond-haired quacks treat the children as zoo animals. Ella-Marja’s cranial measurements are taken, followed by teeth and skin color inspection. Finally, she is asked to disrobe in front of everyone to photograph her naked body. Eyes downcast, hands placed at the back of the head, the girl’s dignity dies a thousand times with the sequence of bright flashes. Her body quivers in tandem with the flash lamp as if the bright light is flogging at her body. After learning more about the structural inequality (Lapps can’t study with the Swedes and so on), Elle-Marja decides to run away to Uppsala, hoping to pass herself as Swedish (takes the name Christina). The rest of the film is about her journey towards the possible emancipation that’s fraught with numerous obstacles. 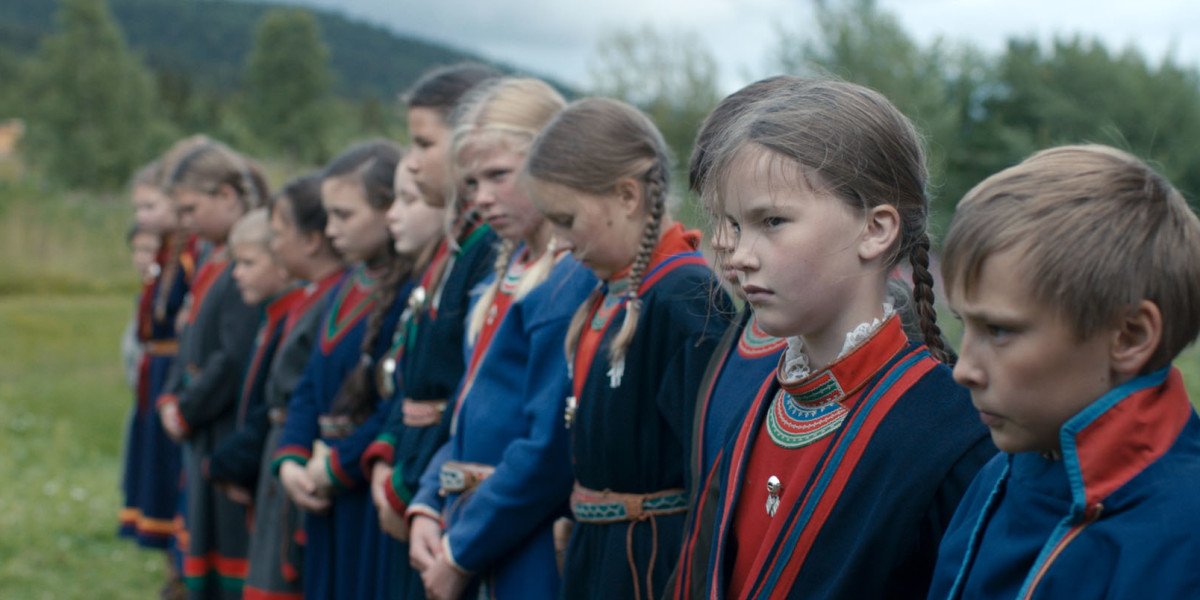 For a first time film-maker Writer/director Amanda Kernell has taken hefty themes of girlhood, institutionalized racism (a little known chapter in Nordic history), guilt and haunted memories. Moreover, the restraint and profundity in the storytelling approach is something we don’t often see in the work of a novice director. Despite the cultural specificity, Sami Blood at its core possesses a familiar coming-of age tale trajectory: one where the teenager disapproves family ties, vies for fresh identity, and after desired accomplishment feels guilt and pain for doing so. Amanda’s unforced message of ‘you can’t deny who you are’ perfectly fits for both the girlhood and indigenous identity narrative. But what really sets the film apart is the director’s keen visual sense and tight grip on the pace. The cultural and self-transformation Elle-Marja undergoes is expressed through carefully calibrated scenes of bodily actions. From putting on traditional dress to heart-wrenching ‘biological’ examination to the act of stealing or bathing or sexual intimacy and so on, these seemingly simple actions are shown to compile her feminine identity and her subsequent distancing from cultural identity. Even when the content is less searing or more familiar in nature, Amanda’s crafting of each sequence keeps things interesting. There are certainly some blunt narrative edges in the later-half, but the director’s mesmerizing & lyrical imagery is captivating. I particularly liked how she holds back the old Christina in blue-tinged hotel room, before cutting to bright frames of the plateau, depicting the past springtime in her life. I also loved how the film begins and ends with the profile shots of Maj-Doris Rimpi’s Christina, the perfect frames that bookends her journey towards understanding and emotional freedom.

The film’s other major strength is Lene Cecilia Sparrok who is an absolute revelation. Amanda Kernell says she started casting for her film two years before shooting. She has auditioned almost all of South Sami speaking teenage girls before selecting the Sparrok sisters. Lene Cecilia (a non-actor) might be small in stature, but with those magnificent eyes that alternately express anger, curiosity, and love she becomes the undying soul of the narrative. There’s not one wrong expression or over-reaction in her performance. She flawlessly embodies her character’s passion, survival instincts, and wilful determination. Further added to this mix of fine-tuned emotions are the feelings of self-loathing, which is a result of internalizing the unjust prejudice she confronts. Lene’s remarkable screen presence and Amanda’s lingering questions about identity strive to diffuse an universal resonance to the narrative.

Sami Blood (110 minutes) is a profoundly moving tale of an indigenous girl, subtly subjected to systematic persecution. It impressively tackles the themes of girlhood and ethnic prejudice with complexity and authenticity.

They Live [1988]: A Biting Satire On Modern Society