Home»Reviews»Films This Week»The Batman [2022] Review: A Delightfully Relentless Crime-Noir Saga Like No Other
Films This Week/Reviews

This review contains spoilers for Matt Reeves’ The Batman (2022)

The caped crusader has been the nexus of many, many live-action iterations, with several actors donning the mantle (and cowl) of the masked vigilante, adding shades to the discourse surrounding the beloved superhero. Matt Reeves’ The Batman is undoubtedly a foray into the figure like no other, as the film etches a portrait of Gotham City that is grimmer, gritter, and one that brims with cynicism, imbuing the crime-addled streets with a life of its own, an entity in its own right. Reeves’ focus on Batman’s crime-solving skills, as explored in-length in the Batman: Year One comics storyline and the eponymous 2011 animated film, works remarkably well within the ambit of The Batman’s narrative, as it is a masterclass in crime-noir storytelling, whilst deftly capturing the character’s comic book aspects. Etching a grim, violent vision of Gotham in ways never done before, The Batman explores its core characters with remarkable nuance and depth, belting a three-hour extravaganza that highlights socio-political ills that plague the city, and the world at large.

Bruce Wayne (Robert Pattinson) has been fighting crime in Gotham City for a period of two years, being only in year two of his crime-fighting phase, a journey that is steeped with unresolved grief and a resilient drive to make things right. While Reeves chooses not to rehash the sequences of Thomas and Martha Wayne getting shot in a dingy alleyway (thankfully so), the weight of the tragedy is still acutely felt by Bruce, whose only way of moving forward and healing, in a certain sense, is to don the cowl and bring about vengeance. Bruce’s grim voiceover acts as an introductory frame of reference, adorning the darkness that grips Gotham when night falls, as that is when the criminal scum comes out to play — but so does Batman, who beats the living daylights out of anyone who dares to do so. Reeves’ Batman is one filled with incredible angst, meticulously jotting down journal entries about his vengeance-fueled vigilantism every night while musing: “They think I am hiding in the shadows…but I am the shadows.” This particular iteration of Batman has not embraced his Bruce Wayne persona yet, as he deems that part of his identity as a sham: he is visibly irritated when Alfred (Andy Serkis) asks him not to throw his life away, and acknowledge his family legacy by supporting the city via the presence of the billionaire-philanthropist persona.

Clearly, he is not ready yet, mired in cynicism as he is, as Nirvana’s somber (and extremely fitting) “Something in the Way” plays over the sequences that highlight the absolutely corrupt nature of the city, the false promises made by those who power (who are merely puppets for those actually pulling the strings from the shadows), and the handful few who are brave enough to attempt to bring about change, such as Jim Gordon (Jeffrey Wright) and politician Bella Reál (Jayme Lawson). However, a dangerous brand of evil has gripped Gotham at the moment: The Riddler (Paul Dano) is targeting Gotham’s most powerful, leaving their bloodied, mangled bodies with riddles and ciphers, while being hell-bent on unmasking the truth about the Gotham elite. An immediate connection between Batman and the Zodiac-Killeresque figure is established, as the letters left at the crime scenes are directly addressed to the caped crusader, deepening the web of conspiracies, lies, and cover-ups, which weighs upon our utterly broken protagonist, as does the sins of one’s father.

Following a string of clues that lead Bruce/Batman to the Penguin’s (an utterly unrecognizable Colin Farrell) notorious Iceberg Lounge, we are introduced to Zoë Kravitz’s Selina Kyle, who is as feisty and feline as the trailers and TV spots promised. Selina’s actions stem from the pain of ostracization and a need to do right by those she loves, which is markedly different from Bruce’s core motivations, who overextends himself to protect the city as a whole, a city unaware of his true self, thankless, and volatile for the most part. The chemistry between the two is organic and immediate — there is something sultry, yet endearing about their dynamic — after all, they are two people shaped by the pain of their past, although in markedly different ways. 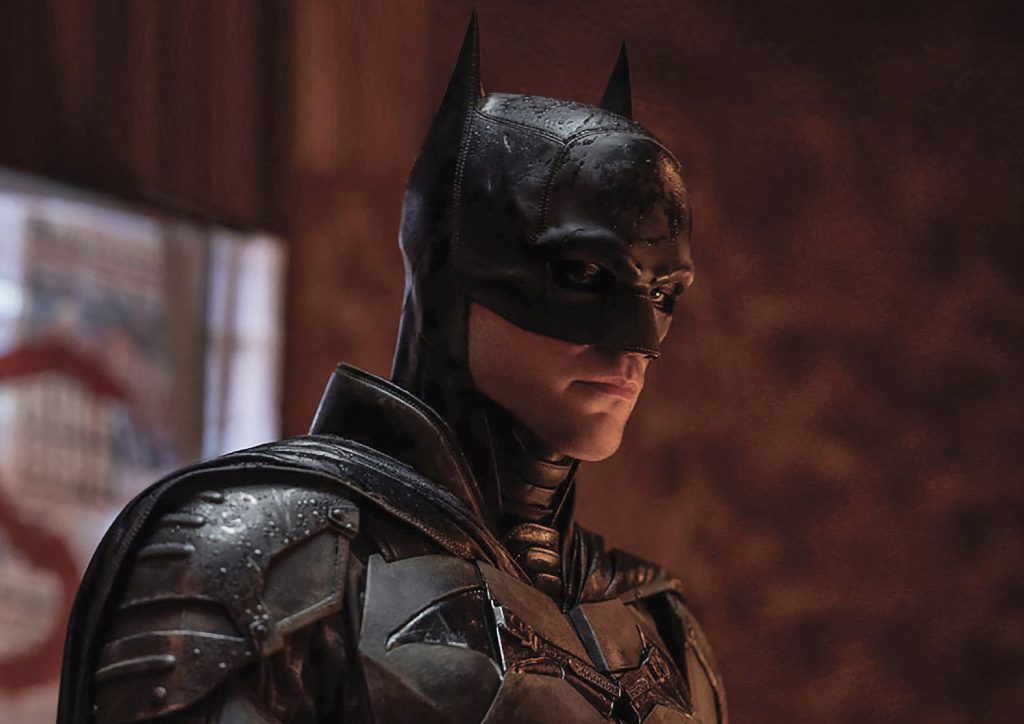 The reason why Reeves’ The Batman is so effective stems from the fact that his vision of Gotham and the characters that inhabit it, is masterfully-crafted, intricate, and steeped in a solid understanding of what drives each character. The Riddler is menacing whenever he graces us with his presence, cryptic and unhinged in the ways in which he executes his grand plan for the city, as already evidenced in the funeral sequence, in which the corrupt DA Gil Colson (Peter Sarsgaard) is attached to a ticking time-bomb, that will definitely go off if he fails to solve the Riddler’s puzzles (and unmask his true self in the process).

Apart from helming a gripping, mystery-thriller at the core axis of its narrative, The Batman boasts of heart-thumping action and chase sequences, beautifully realized with the aid of Greig Fraser’s stunning cinematography, which truly elevates the grand vision of the film. Be it the smog-filled, rundown dark corners of Gotham or the shades of blue interspersed with bursts of neon-red, The Batman is, simply put, beautiful to look at. Moreover, Michael Giacchino’s electrifying score helps cement the way Gotham looks and feels: somber, tragic, chaotic, and beautiful all at once.

In terms of performances, Pattinson is the obvious beating heart of The Batman, expertly navigating the heavy, heavyweight the masked figure carries, imbuing the character with equal parts intimidation and emotionality. Underneath the bulky armor — one that strikes genuine fear in the hearts of criminals and lowlives — is an extremely battered young man, angst-ridden, yet vulnerable, desperate to carry out what he feels is the right thing to do. Kravitz embodies her character with great depth as well, as she is someone who is unafraid to fight for herself and those who need to be protected while going after those who have robbed her of everything, especially crime boss Carmine Falcone (John Turturro). Dano is terrifying as The Riddler, belting an incredibly grounded iteration of the supervillain, whose actions stem from neglect and pain, which is quickly twisted into something wholly nefarious and downright dangerous (which is also the case with most Gotham villains, who are twisted products of their pain). Farrell and Wright are also great in their respective roles, and Serkis’ Alfred is a wonderful iteration as well, as we see glimpses of a man who feels that he has failed Bruce in many ways, unable to step into the fatherly role that the boy truly needed (honestly though, Alfred did his utmost best).

In essence, Matt Reeves’ The Batman is a masterclass in noir-storytelling, which deftly melds elements of David Fincher’s Se7en into the dark, grim, cynical world of Gotham, which is perennially rife with corruption, now left especially vulnerable after’s The Riddler’s plan which floods the city. This creates a visible power vacuum, which is bound to escalate the crime in the streets, along with the power machinations that take place in the shadows, allowing newer players to emerge and introduce their own brand of chaos into the veins of an already-battered city. There’s a brief cameo of The Joker, who is right next to The Riddler’s cell at Arkham: a plot point that could potentially follow Batman: The War of Jokes and Riddles, or develop in a completely fresh direction.

Either way, Bruce/Batman has a lot to do for the city, as realization dawns that he needs to be more: it is not enough to be a symbol of vengeance (as vengeance begets vengeance, inspiring criminals instead of the average Gothamite), but he must evolve into a symbol of hope. To see the character be so authentically in vein with its vast, meandering history (both live-action and comics), while etching a legacy of his very own, is evidence enough of the triumph that Reeves’ The Batman is. The sun shines on Gotham again, but darkness is bound to follow, birthing unspeakable evils, who can only be defeated by our utterly torn, utterly resilient caped crusader.

THE BATMAN IS CURRENTLY PLAYING IN THEATERS.

The Weekend Away [2022] Review: Cheap Thrills that Come at a Huge Personal Cost