In the mid-1980s, general secretary of the Communist Party and the leader of Soviet Russia Mikhail Gorbachev launched a series of radical political and economic reforms to boost the stagnant economy and quell the prevalent national discontent. This was called Perestroika (reconstruction). One of the significant changes proposed was the new policy of glasnost (openness or transparency). The aim of glasnost was to encourage freedom of speech and freedom of press. Though momentous and bolder, the reforms largely failed and further destabilized the Soviet economy, eventually endangering the existence of Soviet Union. Karen Shakhnazarov’s brilliant coming-of-age dramedy, Courier (Kuryer, 1986) was one of the first movies to emerge out of the glasnost era. It’s a multi-layered observation of the frustration and ennui plaguing the Soviet citizens of the era, particularly its teenagers.

The Soviet film-makers of perestroika often engaged with the quandaries of younger generation. In 1965, Marlen Khutsiev offered a brilliant portrait of the Russian younger generation in I Am Twenty. Though melancholic and muted, it also beautifully depicted the vibrant life of early 1960s Moscow. The 1980s depiction of youth in Russian cinema, however, deeply emphasized the doom and decay of social environment. The series of detailed articles in ‘Obskura’ offers an image of youth and the society in late Soviet cinema. However, the commercially successful Courier is more a tragicomedy compared to some of the bleakest teenage dramas that followed.

Courier is sandwiched between two of Karen Shakhnazarov’s wonderful witty dramas – We Are From Jazz (1983) and Zerograd (1988). With Courier, parallels can be drawn with John Hughes’ coming-of-age features like The Breakfast Club (1985) and Ferris Bueller’s Day Off (1986). In fact, the witticisms and buffoonery of Ivan Miroshnikov (Fyodor Dunayevsky), the protagonist of Courier, reminds us of Matthew Broderick’s Ferris Bueller. But then the similarities end at that point. Karen’s approach is more grounded and observational. Moreover, Ivan is a lower middle-class kid, living in a drab satellite town. The most distinguishing aspect of Karen Shakhnazarov’s style is the matter-of-factness with which he presents the Russian youth’s fear and insecurities. 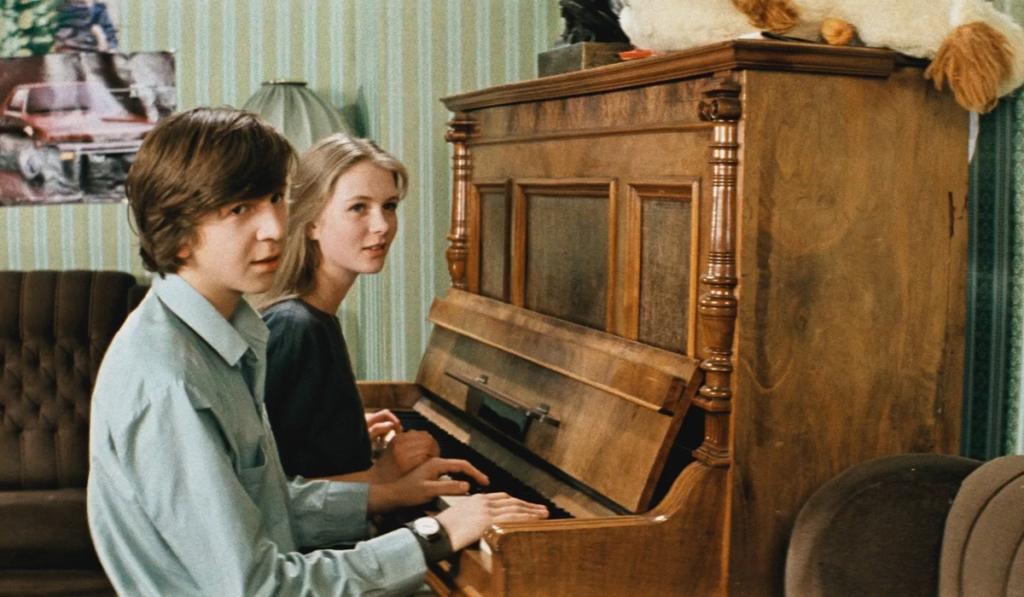 Courier opens with Ivan’s parents getting divorced, the mother (Inna Churikova) reduced to tears and the father visibly relieved. The dad is about to move in with his new, younger girlfriend. Though his parents’ divorce has deeper implications on his psyche, Ivan casually chats with the dad and his girlfriend. Later, the dad moves to Africa and Ivan is left with his devastated mother. Having failed the university entrance exams, Ivan finds a temporary job as a messenger boy for a small scientific journal. There’s also the possibility that Ivan might be soon drafted into the army to fight the Afghans. Ivan adopts a snarky attitude, probably to cope with the discomfiting emotions. He hangs out with his break-dance buddies though he remains in the periphery of the group. His only friend is Bazin, whom Ivan’s mom calls an idiot.

In his first assignment to deliver a message, Ivan goes to the home of the respected Professor Kuznetsov (Oleg Basilashvili). To the professor’s irritation, and to the amusement of his young daughter Katya (Anastasiya Nemolyaeva), Ivan asks them to feed him because he is hungry. Katya likes Ivan’s impertinence and his tall tales. On his second visit to the professor’s home, Ivan is made to sit at the dining table, and the professor asks him, “By what principles do you exist in society?” Ivan, again drawing the ire of the idealist professor, answers that he wants to earn lot of money, own an apartment and a fancy car. When pressed further, Ivan delivers a hilarious rebuttal that makes the professor to throw him out. However, Katya who has lived a sequestered life and grown up with her dad’s lecture on old social values is more attracted to Ivan’s rebelliousness and nihilistic tendencies.

They both begin dating, but immediately their class differences become obvious. The decidedly upper class Katya feels restless among Ivan’s friends. Whereas Ivan feels like an outsider among Katya’s friends, who are interested in Japanese martial arts movies, Paris, and French perfume. Ivan and Katya’s feelings of discrepancy while negotiating with their respective social surroundings becomes more pronounced in the subsequent meetings. Director Karen Shakhnazarov piercingly looks at the internal universe of the youths and the once-idealist adults, both trying to figure out the meaning of life in the changing world. At the same time, the film-maker turns Courier into a graceful documentation of Soviet urban culture of the time. He presents us few set-pieces that showcase the cultural influences dominating the period: the break-dance (that blissful sequence towards the end!), rock music, disco parties, etc.

The historical understanding of the era Courier is set would definitely enhance one’s movie experience. Yet the film’s powerful questions and observations are in a way timeless. The older generation being less hopeful of the youth, and the youth expressing fury towards the values of older generation is an ageless conflict. Professor Kuznetsov represents the generation of dreamers and believers. He belongs to the post-war generation that despite the hardships, invested themselves in socialism and believed in a better future.

Now that the future is there, the dreams of youths are not the same as the previous generation. This dissonance, alongside the social and political disintegration further stokes the inter-generational conflicts. Ivan and Katya aren’t exactly indifferent or lacking ambition. But the society they are part of is clearly falling apart, taking along with it any meaningful desires or dreams.  In fact, at one point we see how this climate of ennui and aimlessness is not just affecting the youth. The disaffected employers of Ivan are fatigued by the drudgeries that the secretary dreams of a Japanese husband, whereas the editor’s biggest wish is that the barometric pressure shouldn’t drop so that the fish bite better.

Also Read: Larks on a String [1969] Review – A Tragicomic Examination of the Impact of Totalitarian Ideology

Time and again, Karen highlights the underlying good attributes or the ‘purity’ of Ivan. You could deeply feel for Ivan when he expresses concern for his mother (in his own way) or when he sings the traditional ‘Nightingale’ song (‘Solovey’ by Alexander Alyabyev, composed in 1826). He dreams of Maasai people, the leopard, and African wilderness. It suggests Ivan’s yearning for the connection with his dad. But also underlines his need to disappear from the suffocating conformist society. Amidst all the problems, the director do proposes that few things are still untouched by the society, exemplified by the final act of singing.  In that unexpected moment, when Ivan sings the song, something tenuously binds the young and the old, which is again lost with the onerous question, “What you want out of life?”

Of course, what can one aim in life in a nation with no opportunities and which sends its youth to fight wars. Karen Shakhnazarov drives this point more clearly after the dinner party scene. Ironically, it seems Ivan did learn something from his sojourn to the adult world (at the professor’s house). When Ivan meets his impoverished friend Bazin (also raised by a single parent), he asks “Do you have a wish Bazin?” To which, the youth replies, ‘I need a coat’. Ivan gives his own coat to Bazin, and ruefully says, “Wear it, and dream of something great”. But the slightly positive note in Ivan’s advice is once again undercut by the hard reality. Walking back to home, Ivan looks at a soldier with a scarred face. The soldier stares at him. Realizing what the nation has in store for him, Ivan woefully walks away.

Overall, Courier (84 minutes) is an empathetic look at the life of a Russian youth during the waning days of Iron Curtain. Unlike many other era-specific Soviet films, it has aged well, mostly due to its timeless themes that includes generation gap and adolescent angst.

Zack Snyder’s Justice League and the Question of Finality