“Larks on a String’s potent imagery retains hope even when the camera moves down into the bowels of hell.“

Czech film-maker Jiri Menzel, who often collaborated with and faithfully adapted the works of the great Czech author Bohumil Hrabal, made pretty good comedies that were entwined with irony and pathos. The chief attribute of Hrabal’s writings is his focus on dreamers and fools who nevertheless manage to survive the tragedies and turbulent historical forces at work. Mr. Hrabal’s quasi-surreal prose also deeply underlined the absurdities and eccentricities of every-day life. The Czech New Wave cinema of the 1960s borrowed or embodied such characteristics in their works [Josef Skrovecky’s stories and novels were also hugely influential]. While the Czech films of the 1960s didn’t share a specific style or thematic perspective, it was imbued with a great deal of social relevance and creativity, which was unprecedented not just within socialist systems, but also seems utterly impossible within the Western commercial film-making system. And among the era’s different style of directors, Jiri Menzel’s movies projected the most compassionate and humanist perspective.

Jiri Menzel’s directorial debut Closely Watched Trains (1966) was based on Bohumil Hrabal’s novella and went to win the Best Foreign Film Oscar, only the second Czech film to do so after Elmar Klos and Jan Kadar’s The Shop on Main Street (1965). Menzel’s next collaboration with Hrabal led to Larks on a String (‘Skrivanci na niti’, 1969), which was based on the author’s collection of short stories, set in a steel re-processing works in the industrial town of Kladno.

Menzel started filming Larks on a String during the all-too brief liberalized period of Prague Spring, but just when the movie was ready for release Soviet tanks invaded Czechoslovakia (August 1968), quashing the Czech film-makers’ efforts to expand their cinema beyond the narrow ideological demands. Since Menzel’s movie was a direct attack at the absurdities of the socialist regime, it was immediately banned and didn’t emerge until the collapse of Soviet Union. Screened at 1990 Berlin Film Festival, Larks on a String surprisingly won the Golden Bear. 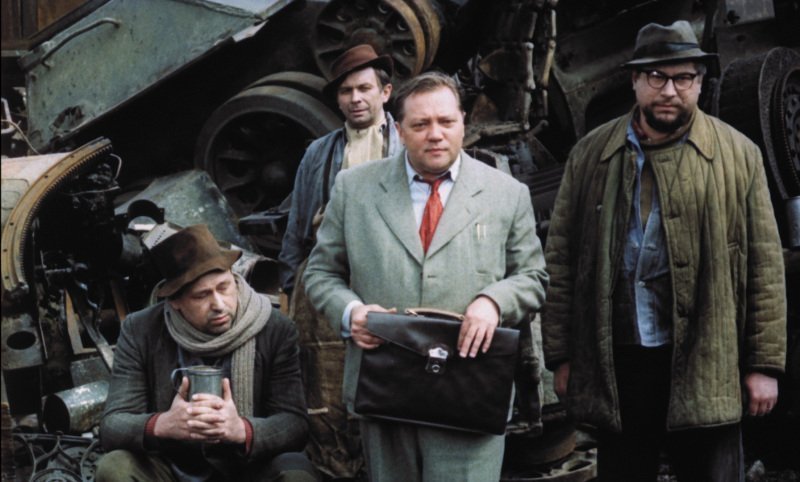 Larks on a String revolves around a band of misfits: a motley crew of condemned ‘bourgeoisie’ men and female prisoners working in a scrap yard, close to a steel re-processing plant. The film is set in the late 1940s when the Communist Party of Czechoslovakia, with Soviet backing, carried out a coup (in February 1948) and took over the government. The bourgeoisie members include a philosophy professor, prosecutor, saxophonist, barber, dairy owner, and a cook. All of them are undergoing ‘reeducation’ through hard labor in order to understand the wrongs of their ‘imperialist thinking’.

Similar to Larks on a String: Loves of a Blonde [1965] — When Political Practices Invades Youthful Romantic Impulses

The dairy owner is an exception because he has closed his premises and volunteered to work for the betterment of Socialism. The group is watched over by a suited trade union representative (Rudolf Hrusinsky), who boasts he is a genuine working-class person. Apart from educating the bourgeoisie, the trade union guy also visits slums inhabited by the Gypsies and ‘teach’ them the advantages of cleanliness and personal hygiene. The female prisoners are named enemies of the state because they attempted to defect to the West. At work time, they remain under the command of a young, awkward male guard (Jaroslav Satoransky).

While the authorities vow to ‘smelt them down into a new kind of people’, the incarcerated men and women exchange pleasantries, form friendships, and share clandestine moments of affection. The main characters in the film are Pavel (Vaclav Neckar) and Jitka (Jitka Zelenohorksa) – both played pivotal roles in ‘Closely Watched Trains’ too. Pavel is a cook who is punished for being a Seventh-day Adventist and yet he continues to refuse to work on Saturdays. He clumsily tries to woo Jitka, the young female prisoner with the sweetest smile. Their romance could be termed ‘Chaplin-esque’, but that wouldn’t do justice to the endearing quality of their closeness.

There was a light of something extraordinarily humane in the couples’ half-smiles, embarrassments, melancholy, and yearnings. The other important pair in the narrative is the male guard and his Gypsy wife (Tereza Galiova). While political difficulties impede Pavel and Jitka’s romance, the guard and his Gypsy wife’s relationship is impaired by cultural differences. The husband doesn’t understand the Gypsy rituals, whereas his wife feels alienated in their sterile and newly furnished apartment. Very often, she hides from her husband, rejecting his sexual advances.

The trade union guy’s perverse actions remain as a stark contrast to the aforementioned couples’ spoilt love life. After cleaning the face of Gypsy slum children, we see the guy entering into a shack questioning an old lady whether the ‘tub is ready’. Actually, under the pretext of teaching an adolescent Gypsy girl about hygiene, he is using his power to sexually abuse her. This particularly shocking revelation completes Menzel & Hrabal’s take on ‘love’ under the totalitarian regime where coercion and deception remain rules of governance. Menzel repeatedly focuses on different propaganda images or posters of ‘idealized socialism’. This helps to stoke the ironical tone since in reality, the relationship between working-class and authorities resemble the abuse carried out by the trade-union guy on the teenage girl. Elsewhere, the natural, tender love between winsome Pavel and luminous Jitka is fiercely controlled (they both marry, by using a proxy) and the hope to consummate their love is stymied. 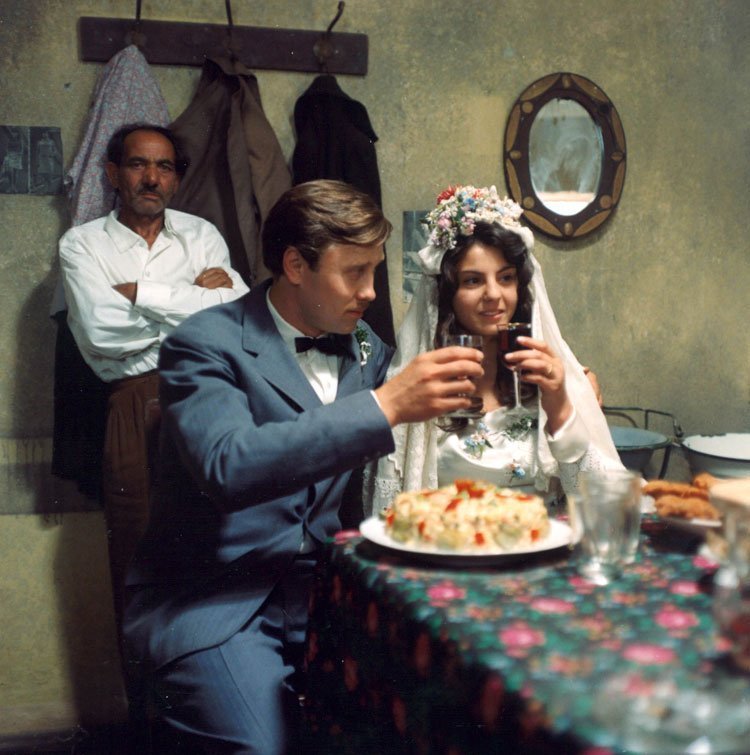 ‘Larks on a String’ does feel a bit episodic since it was stitched together from different texts of Bohumil Hrabal. Nevertheless, Menzel and his regular cinematographer Jaromir Sofr do a neat job in diffusing great warmth and wry humor to the individual, episodic scenes (for instance, the moments showcasing the strong, unspoken connection between the female prisoners the men working in the scrapyard). Menzel was equally adept at handling the eroticisms in the narrative. At one occasion, the male workers spy on women undressing, but this furtive encounter lacks the usual sexist remarks. What it emphasizes is the difficulties of a leading a normal sexual life under the diktats of socialist rule.

Also, Read — Pigs and Battleships [1961] — A Probing Portrait of a Marginalized Society

Hrabal’s female characters could be deemed as attractive models of male enchantment or fantasy (and a bit puritanical), but they do possess the power and often takes initiative in forging relationships with men. The range of characters designed by Menzel and Hrabal is excellent and no matter how small their part they perfectly constitute to the overall vision of the narrative (the professor character — played by Vlastimil Brodsky — is a good example of this precise writing mode). Furthermore, director Menzel’s conscious use of metaphor and skillfulness at visually conceiving Hrabal’s free-flowing prose asserts a considerable power. Eventually, Larks on a String’s potent imagery retains hope even when the camera moves down into the bowels of hell (in the final sequence). He appeals to us to not lose the very things that make us human while pursuing nebulous things like ideology and economic growth.

Lars on a String Trailer