Home»Reviews»Films This Week»Zombivli [2022] ‘Zee5’ Review: A wild ride of a Zombie Apocalypse with a Social angle
Films This Week/OTT/Reviews/Zee5

Zombivli, directed by Aditya Sarpotdar, had a theatrical release in January. Now that it has reached the streaming landscape, viewers like me could enjoy the entertaining ride sitting at home. The film is about a zombie outbreak that occurs in the lands of Dombivli, a suburb of Mumbai. The title is obviously a wordplay between Zombie and Dombivli, and the idea may have been something that was mentioned in jest. ‘What if zombies come in Dombivli? Will that be Zombivli? Huh? Huh?’ It may have been a scenario like this, or it may just be that I am overthinking it, but the result achieved by this creative team is certainly applaudable.

Making a genre film beyond the lands is often associated with (the USA), which is no simple task. Zombivli brings the horror of zombies to our turf and attempts to make it our own. We witness the story from the personal narratives of a recently married, well-to-do couple (Sudhir and Seema) and a slum dweller (Vishwas). Sudhir (Amey Wagh) moves to the Mumbai suburbs for his new job and his pregnant wife, Seema (Vaidehi Parashurami). The apartment building they are about to move in is riddled with water shortage issues so is the neighborhood that Vishwas (Lalit Prabhakar) comes from.

Unlike the privileged lot from the apartment building, the slum dwellers are subjected to poor conditions and hardly ever dealt with respect and dignity. The people from the apartment fight for their first-world problems while Vishwas and his mates fight for their chance to get clean water and the respect to have a say in the situation they are in. The reason for the slum’s poor water situation is a mineral water factory in their neighborhood, where the migrant Sudhir is about to start working. The cases are built so that the script becomes prone to clashes and conflicts. The writers use their tools in their hands to navigate a resolution that can blend in the real-life issues with the comedy and impending horror of zombies. 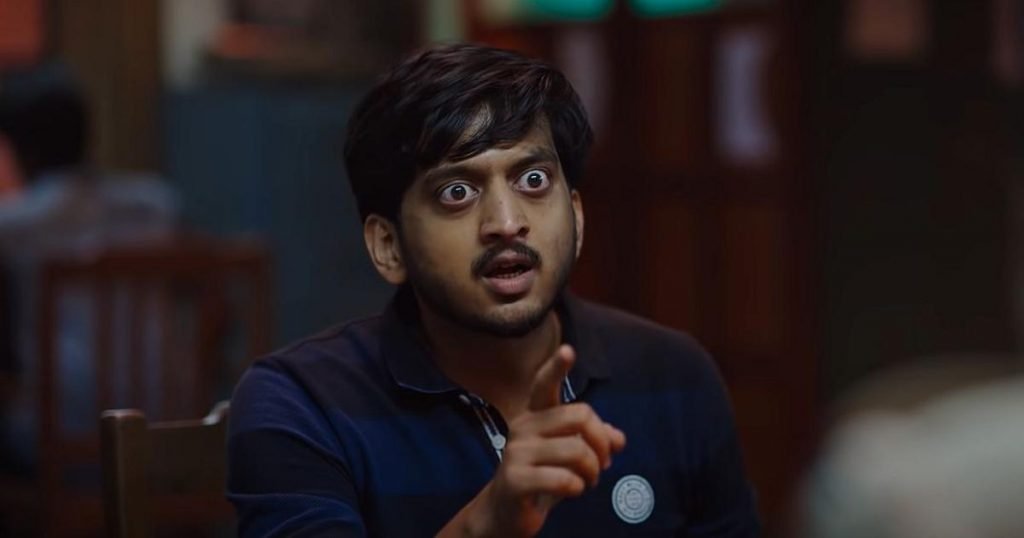 The one zombie film that I can never take off my mind is Edgar Wright’s ‘Shaun of the Dead.’ This classic film creates out-and-out entertainment while mixing the elements of horror and comedy. The script works on its characters and builds a solid interpersonal narrative with convincing character arcs. Unlike that, Zombivali does not delve enough into the interpersonal dynamics. It makes an emotional connection with the central couple and with the rebel. They are shown to bring in different sides of the argument and to present the center of the conflict (the mineral water organization) from different sides.

Checkout – 5 Shows Like All Of Us Are Dead On Netflix

However, the supporting characters are severely underwritten. They appear merely as wheels in taking the story forward, while hardly contributing themselves to shaping the film since they don’t have a rounded personality. They appear for what they represent, the money-minded personality (crook industrialist politician), the urge to cover a story (journalist), or the apathy towards everyone beyond themselves (the privileged lot).

What is admirable despite such characters in broad strokes is the mix of all these genre elements in an entertaining and genuinely thrilling ride. It is not emotionally moving because of giving little attention to deepening its criticism of social issues. Nevertheless, it manages to keep you thoroughly engaged especially with its comic bits. Rarely have I seen a pregnant woman shown in such a manner, who takes the lead and makes others feel confident by her mere presence. Vaidehi’s character brings so much energy to the film and departs from the cliched depiction of a woman with a baby on the way. Rarely have I even seen the apathy of the so-called middle-class being discusses in a direct manner. The film does not achieve a feat by showing these elements in this way. Still, it feels refreshing to find characters explored in an unorthodox form.

Also, Read – One Cut Of The Dead [2018] Review – An Original Comedy Within A Unoriginal Horror Movie

The music tracks do not just bring in the thrilling mood but find the much necessary hilarity of their bewildering situation. The classic folk song ‘Vinchu chawla’ is reenvisioned as an upbeat track with punchy beats. The literal and metaphorical connection makes any Marathi person chuckle at the idea of the song’s inclusion. Not just the situations, but tiny moments from Zombivli also stand out on their own. Seeing bewildered Sudhir chant after his car gets surrounded by zombies made me laugh so hard. Not just because of Amey’s acting performance, but due to the insight into how the people from his social status run after faith-driven solutions in the situations of conflict. Even when the situation is unknown, faith wins over logic for him. Nevertheless, what wins in Zombivli is the idealistic drive, which gives the film, a generic feel-good exit.