Using a fascinating structural trick, writer/director Shinichirou Ueda has paid an innovative tribute to micro-budget horror film-making, while also making fun of the silliness and imbalances surrounding such a workplace

There are two must-dos to better enjoy Shinichirou Ueda’s wild comedy One Cut of the Dead (‘Kamera o tomeru na!’, 2018): go into the movie blind (which means skipping this review immediately!); and don’t judge the movie based on its first 35 minutes. I didn’t follow the second advice and skipped the film after 20th minute. The shaky hand-held camera aesthetics and bad acting (deliberate?) literally made me sick. But the superlative adjectives (the word ‘meta’ was repeatedly thrown in to impart a positive vibe) with which the movie was described by fellow, ‘trustworthy’ cinephile friends reluctantly pushed me to go past the 20th minute.  And yes, despite the abhorrent first half-hour – an overreaching gimmick termed as ‘horror comedy’ – what follows is a charmingly riotous drama which works as a superb satirical remark on the camaraderie, desperation, and messiness of the film-making process itself (especially low-budget genre film-making). In fact, One Cut of the Dead’s second and third act was such a rollicking fun that it smartly redeems the crappy horror episode it starts with.

The film opens with grainy, Romero-esque zombie-flick aesthetics with an annoyingly weeping young woman, carrying an axe, trying to fend off her slowly advancing boyfriend now turned into a zombie. As the woman gets bitten, an exasperated director (Takayuki Hamatsu) shouts ‘cut’ and blasts the actress (Yuzuki Akiyama) for her inability to emote realistically in what was the scene’s 42nd take. “Give me real fear…your whole life is fake”, the director yells before calling for a 30-minute break, on the insistence of make-up artist Nao (Harumi Syuhama). The actress, make-up artist, and co-star (Kazuki Nagaya) let off steam by talking on the urban legend related to their shooting locale: an abandoned water filtration plant.

The legend is that gruesome experiments on humans conducted there have left some blindly ravenous for human flesh. This hearsay very soon proves to be true as members of the film crew gets bitten and converted to zombies (isn’t that stale idea already envisioned in ‘Diary of the Dead’ and ‘Grave Encounters’?). The director, however, loves this development and gleefully shouts ‘Action!’ to record the actress’ ‘real’ fear of the undead. Although drenched in blood, the actress eventually emerges unscathed. But once again we hear ‘cut’ to confirm our doubts that this is of course a movie-within-a-movie (keeping up with the title all of this seemingly unfolds in a single-take). The rest of the movie offers delicious comedic payoff by chronicling how the pastiche of a zombie-short came into existence (by going back a month before). 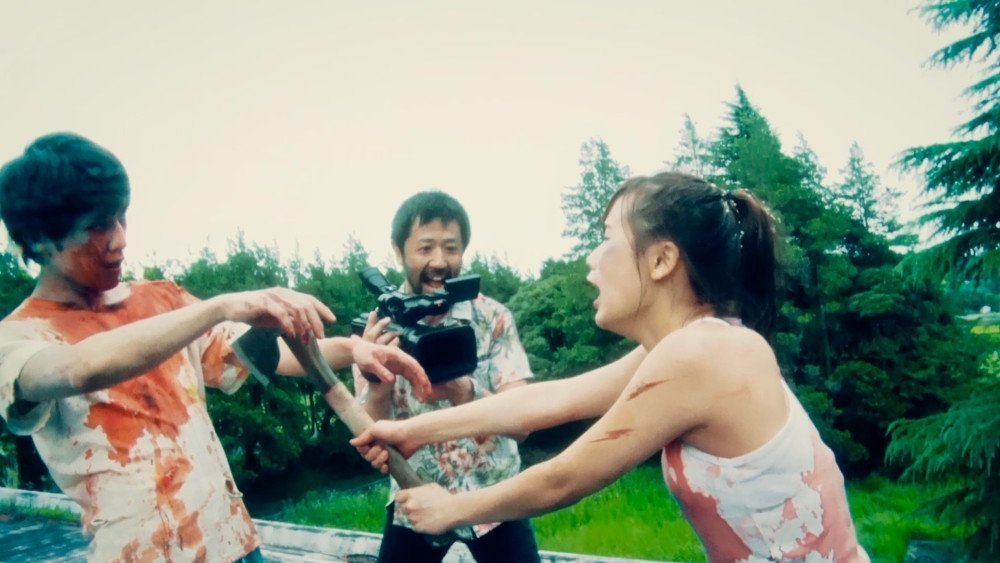 The second phase of the movie goes starts by showing a not-so-famous genre-director Higurashi meeting with suited TV station executives of a new “zombies only” channel. They want Higurashi to helm a 30-minute zombie flick, shot in a single take and to broadcast it live. He reluctantly takes up the project and before long he is wrestling with unique movie-set problems brought up by alcoholic, image-conscious, health-obsessed, invasive actors and technicians. After exhausting himself with rehearsals and script rewritings, Higurashi is all set for the tension-filled premiere day. Alongside the exhausting teamwork that marks this short-film production, we also get a glimpse of Higurashi’s family life. Even though he is blessed with a supportive wife (once an actress who overly immersed herself into the characters she played), Higurashi is pained over the growing estrangement with his teenage daughter (Mao).

The third phase of the narrative veers into riotous comedy territory as many things go wrong in the live broadcast production. The uneven quality of the first half-hour is seen from an extremely different perspective and the alleged ‘behind-the-scenes’ drama are superbly staged. Disgruntlement, impromptu deviations, dyspepsia, inebriation, and other unscripted anomalies plaguing the set add delectable layers to the narrative. Moreover, the meta-ness is pitched to new heights in each phase that what start as awful ends up being awesome. Positioned beside the celebration of the low-budget film-making challenges is the refreshingly sweet subplot involving a father trying to  reconnect with his daughter.

Using a fascinating structural trick, writer/director Ueda has paid an innovative tribute to micro-budget horror film-making, while also making fun of the silliness and imbalances surrounding such a workplace. Even though different in terms of tone and structure, the movie partially reminded me of Sion Sono’s batshit crazy ‘Why Don’t You Play in Hell’ (2013), and American indie drama ‘Living in Oblivion’ (1995). Those who patiently survive through the contrivances in the first act would be completely caught off-guard by the organic and exciting developments in the later acts. Altogether, One Cut of the Dead (96 minutes) is one of the most memorable and goddamn funny genre-blending exploits.