Director Gustav Moller subtly positions the nerve-wracking scenario in order to fashion a complex study of a man with a history of acting on impulse and overstepping authority.

Danish film-maker Gustav Moller’s feature film debut The Guilty (‘Den skyldige’, 2018) and Aneesh Chaganty’s American thriller Searching (2018) showcases how much can be achieved despite cutting back on the logistics of a narrative. While Searching chronicles a father’s frantic online search for his missing teenage daughter, strewn with Hollywood-style twists, Moller’s ‘The Guilty’ takes us on a thrill ride into a morally complex situation which on the surface looks very simple. Both the movies expertly plays with our auditory perception (sizeable credit belongs to the sound designer), pushing the audiences to create on off-screen reality wholly based on sound cues and vocal inflections. Nevertheless, Moller’s film I felt was more layered than Searching (although both are competent in terms of craftsmanship), doubling as a delicate character study tackling the themes of perception, truth, prejudice, and empathy. Of course, the single-most efficient element of The Guilty is the tortured expression carried by actor Jakob Cedergren, whose emotive visage imparts huge tension into the single, low-lit location.

The film begins with a extreme close-up of a headset, the delirious chatter flowing within is received by emergency dispatcher Asger Holm (Cedergren). The camera slowly zooms out to show the sterile rooms of the dispatch station, the red light that turns on when the dispatcher takes a call and the flickering, little blue light on the headphone only stands out among the darkly-lit grey cubicles. The couple of calls Asger initially takes establishes his callous, bored attitude. He furtively speaks on his mobile and we soon glean that Asger is a police officer demoted to emergency dispatch desk due to a pending investigation. The nature of the case on Asger only becomes clear in the end. But at the start of the narrative, he is 100 percent sure that the court proceedings the next day would completely absolve him (thanks to the ‘support’ of his partner and boss). However, all these self-centered thinking vanishes when Asger takes a call from Iben (voice of Jessica Dinnage), a desperate woman claiming she has been abducted.

Asger’s experience as on-field police officer kicks in and before long he uses the limited tools of the dispatcher to find the abductor’s identity: Iben’s ex-husband Michael Berg (Johan Olsen) who has a record of violence. Iben’s two little children are left at home. Asger talks to the eldest six-year-old Mathilde (Katinka Evers-Jahnsen) and promises the frightened child that he would definitely save her mother. After bouncing between calls with the dispatch center, Iben, and Mathilde, Asger feels the limitations of his official role would not ensure the kidnapped woman’s safety. So without leaving the adjoining rooms of his office, Asger uses some unofficial channels to save Iben. The consequences of this method provide some disconcerting results, partly because Asger has equated his obsession to save the woman with his desperate hunger for personal redemption. And, nothing in this scenario plays out the way we expect it to. 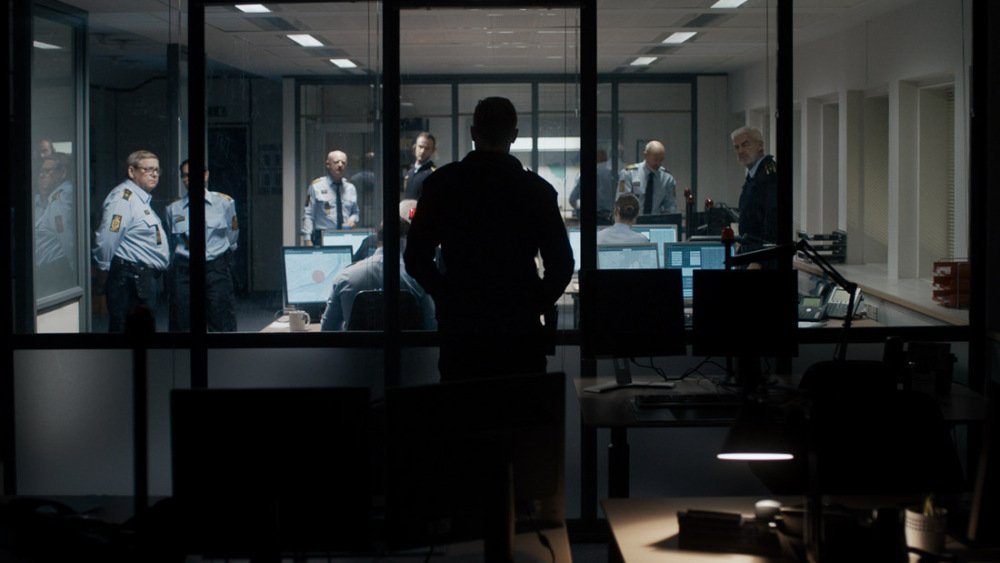 The Guilty pretty much reminded me of Steven Knight’s phenomenal chamber drama Locke (2013). Although the films are different in terms of story-line, both brilliantly showcase a flawed man’s slow unraveling over few phone calls. There are of course many other single-location thrillers involving phone calls like Phone Booth (2002) or Buried (2010). In fact, Brad Anderson’s Halle Berry starring The Call (2013) follows a 911 operator going out of her way to save a kidnapped teen. But like Locke and unlike other films mentioned, The Guilty is largely free from narrative pretensions and implausibilities. Moller subtly positions the nerve-wracking scenario in order to fashion a complex study of a man with a history of acting on impulse and overstepping authority. The director does a great job in making us perfectly imagine the situation through the voice that trickles out of phone-calls. We are convinced of Asger’s perception (or assumptions), however, limited it is, even after witnessing his naivete, recklessness and ironical pronunciations (“Do you know who the police are? We’re protectors. We protect people who need help”, he says to anxious Mathilde).

To Moller’s credit, he largely uses the Cedegren’s visage (close-ups are vibrant enough) to keep us locked within his character’s head-space. Jakob Cedegren not only does a great job in expressing his helplessness and need for salvation but also does a great job with his reactions to the callers (especially when talking to Iben and Mathilde). Special credit must go to Dinnage who whispers Iben’s desperation and panic through the call. The exemplary sound design conveys the authentic sense of stress in real-time (subtle clues are drawn from the ambient noise in the caller’s surroundings). Written by Moller and Emil Nygaard Albertsen, the script parcels out the need-to-know information step-by-step, raising the emotional stakes at the right moments. Asger’s fraught past becomes an integral element to the narrative, ratcheting up his compulsion to ensure justice.  Moreover, the strict protocols and rules observed actually add to the film’s simmering tempo than dampening it. For a tense thriller, director Moller induces a lot of moments filled with quiet transcendence, the most graceful among these happens to be the final shot as Asger, bathed in white light, is on the verge of entering the outside world.

At 85 minutes, the tautly plotted ‘The Guilty’ takes us on a gripping, multilayered cinematic trip that deftly focuses on aural space and our inner imagery. Unlike the gimmicky Hollywood products, the Danish film uses its single location set-up to ingeniously deliver a treatise on preconceptions and moral baggage.

The State of Modern Comedies – Conclusion: Theories of Comedy