Comedy films of the future must look back not only to the past of comedy in their medium, but of all comedy in entertainment and the theories that have developed with it. Each entry in this series has dealt with the various styles and theories of comedy, which are debatably official terms in the under-researched field of comedy. Get ready to strap on your mortarboards, we’re going to kill comedy by dissecting it, just like a frog.

Superiority
This theory works somewhat like schadenfraude – it takes comical pleasure in the misfortune of others because it confirms and elevates the spectator’s superiority. Although it may seem cruel to laugh at someone slipping on a banana peel in public, there are some ways this theory makes the comedy sound less evil. There is a sense of sympathy on display, as the spectator is identifying with the humiliation and pain of one, therefore at least empathising with the human experience. This explains why during such an instance, we may cringe before laughing, unusually making the laughter a second (and unimmediate) reaction.

This also works for a piece of fiction like films, where the actual instance of humiliation is only staged, therefore bypassing the moral issue of this superiority. This particularly works for the early Vaudeville-like slapstick performers of cinema, such as Buster Keaton, Charlie Chaplin, the Marx bros, and the Three Stooges. Particularly for Chaplin, the superiority theory is in play throughout his, though City Lights and The Kid have it both ways as they bring the audiences’ sympathies back to him with joyful endings for his characters.

This leads us to the lads who have been compared to the silent era giants like Buster Keaton, Jackass, who have crafted one of the most pure examples that exemplify this theory. Unlike fiction films, the antics in their films are indeed real, but they masochistically bring it upon themselves to the sadistic and empathetic entertainment of the audience. 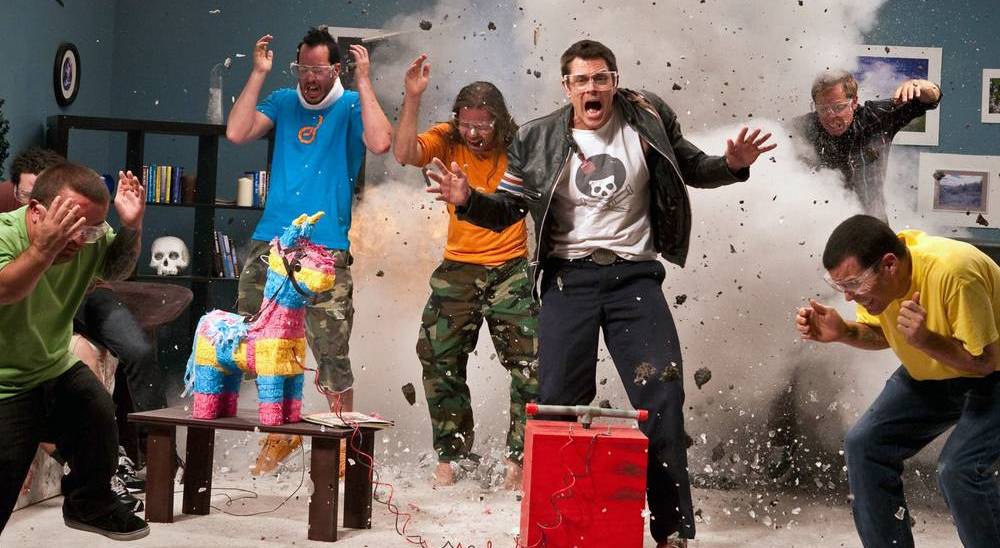 And it’s not just the audience who are at the spectator viewpoint of superiority. The audience themselves are represented through the Jackass crew themselves, as the remaining members watch on, pointing and laughing and falling on the ground in hysterics at the cruel expense of the poor and pained participants.

These clowns, comedians, stuntman, and masochists (among others in the field of comedy) put themselves and their ego on the line to allow audiences to laugh at them, and in a way also with them, as no single person is above the superiority – we are all susceptible to the cruel physical and emotional follies of existence, and the likes of Jackass exaggerate this existential angst with the only remedy being a desperate laugh at the self (and the self through others).

Incongruity
The Everything Is Terrible films typify the incongruity theory to a T. Based on the incongruous juxtaposition that makes up a joke, this theory usually revolves around jokes with ordinary and familiar set-ups, but with punch-lines that are either unexpected or reveal the set-up to (in context) no longer make sense. It’s a visceral response, even if these jokes are carefully written and communicated.

This is the essence of the EIT films, as they produce an incongruous joke with each edit (and they’re edit-heavy films). This theory revolves around logic and familiarity being recontextualised when two things that shouldn’t go together do go together to produce humour. The EIT films recontextualises earnest and humble videos from the ‘80s and ‘90s (instructional tapes, religious kids’ shows, terrible films) by placing each short clip one after the other to form sentences upon sentences in a stream-of-consciousness manner, transforming this content into ironic, sardonic, blackly humorous, and even self-critical examinations that reveal the outdatedness and ridiculousness of this kind of cultural trash (eg the didactic teachings of religious kids’ shows). 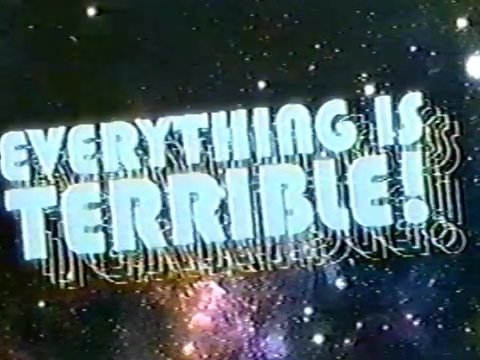 This theory may have the most relevance to our burgeoning online society and the so-called millennial humour, which uses humorously disjointed contrasts – even without any clear punchline or cleverness, sometimes the mere combination and juxtaposition of incongruous subjects can be funny in the internet age where all subjects are living within the same realm on the web.

The so-bad-they’re-good films are another perfect example of this theory, one more connected to the experience of film watching. The many mistakes and inadvertent idiosyncrasies of these films offer a converse experience of watching a film, where pleasure is generated through how delightfully terrible it is, whether it be the technical errors, the baffling storytelling, or the very unusual core of the film that marks its contradictory existence.

Relief
As this theory’s title suggests, the humour of relief theory comes from a release of pent-up tension, which, as some theorists like Herbert Spencer and Sigmund Freud claimed, makes this theory most closely associated with the involuntary act of laughter. It also seems most closely associated with horror films, especially of course horror-comedies, where the tension is built up, the scare is suddenly brought upon the audience, and laughter is a delayed reaction, coming after the screams of fright.

But there are other ways in which relief theory comes into practice, and Dadaism certainly taps into it. With such reiterating and time-wasting nonsense that appears through Paul McCarthy’s characters, that he plays in his own art videos, there is quite a lot of tension to be built up to anxiety-invoking levels. There are sometimes some genuinely funny punchlines, but sometimes the ‘relief’ aspect of this humour comes involuntarily and at any moment for any given audience member – during his film Painter (1995), when he spends up to ten minutes chuckling to himself as he cuts off his over-sized fingers, there has to be some point when laughter will overtake you. 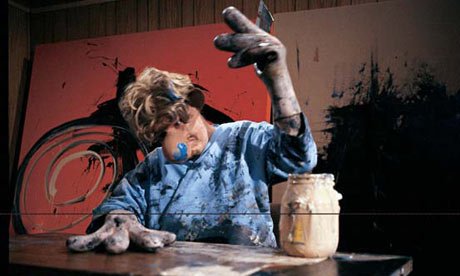 Relief is also a big part of cringe-based humour, where the increasing level of social awkwardness causes laughter from a viewer even before the scene is finished or the cringe has come to an end (eg The Office, Borat, Curb Your Enthusiasm). This peculiar kind of humour, where the cringe seems to become exponentially worse the more elongated the scene is, has the same structure as Dadaistic humour. Perhaps if audiences seem to be in tune with the sort of stop-start structure of cringe humour, they will hopefully feel the same way with the similar, yet obviously more Brechtian nonsense of Dadaism.

These theories are certainly interchangeable and can meld with each other. The relief theory works for Everything Is Terrible movies, as tension is built up through one clip and then the relief comes through the sudden punchline in the next clip. And the disgusting, messy, and self-harming slapstick antics Paul McCarthy portrays in his art videos definitely put the audience at a spectator level for this buffoon, as part of the superiority theory. And Jackass, well, I’m sure there’s something to say about the incongruity of those movies.

The state of modern comedies has quite a few lessons to learn from these films and these theories. They don’t need to entirely replicate these bizarre and audience-dividing antics, but merely use them or their contemporaries as influences to make future comedy films funnier, more unexpected, and more exciting. There’s room alongside the dramedies and the critically panned blockbuster comedies for a new kind of properly funny films, consistently comedic on the surface and at their core, that will hopefully rejuvenate the tired, underwhelming, and regressive state of modern comedy films.