Saani Kaayidham currently streaming on Amazon Prime Video: Men have dominated the revenge genre for the longest time. And while the methods employed by these fictional characters have been justified and criticized, it started a weird trend around their female counterparts. For some reason (well, the reason is sexism), women end up being the dead love interest who needs to be avenged by the men who are the epitome of masculinity, and since the men are doing such a noble task, they can go to any extent. Female-led revenge thrillers/dramas/action movies have been around for some time, e.g., Kill Bill Vol.1 (2003) and Vol. 2 (2004), Lady Vengeance (2005), Audition (1999), The Northman (2022), Hard Candy (2005), and more. But recently, they’ve thankfully grown in numbers to counteract the testosterone in the genre, e.g., Villainess (2017), Revenge (2018), Alice (2022), True Grit (2010), Mad Max: Fury Road (2015), and Widows (2018). Now, Saani Kaayidham (2022) has joined this glorious list.

Written and directed by Arun Matheswaran, Saani Kaayidham tells the story of Ponni (Keerthy Suresh) and Sangaiah (Selvaraghavan). The duo is first seen brutalizing a woman for the location of some men, burning her, and then driving off in a Matador. A few days before this incident, we were informed that Ponni’s husband Maari got into a scuffle with his employers and was fired from the job. But the issue wasn’t just about what Maari said or did. The problem was about what Maari said and did while belonging to a lower caste and daring to call out the rude behavior of his upper-caste employers.

On Ponni’s advice, Maari apologized to them, but these upper-caste men didn’t only make casteist comments but said nasty stuff about Ponni. When Maari retorted, these men burnt down his house while he was inside with his daughter and beat up and raped Ponni. Realizing that the law won’t side with her, Ponni (with the help of Sangaiah) sets out on a revenge mission to kill her abusers. 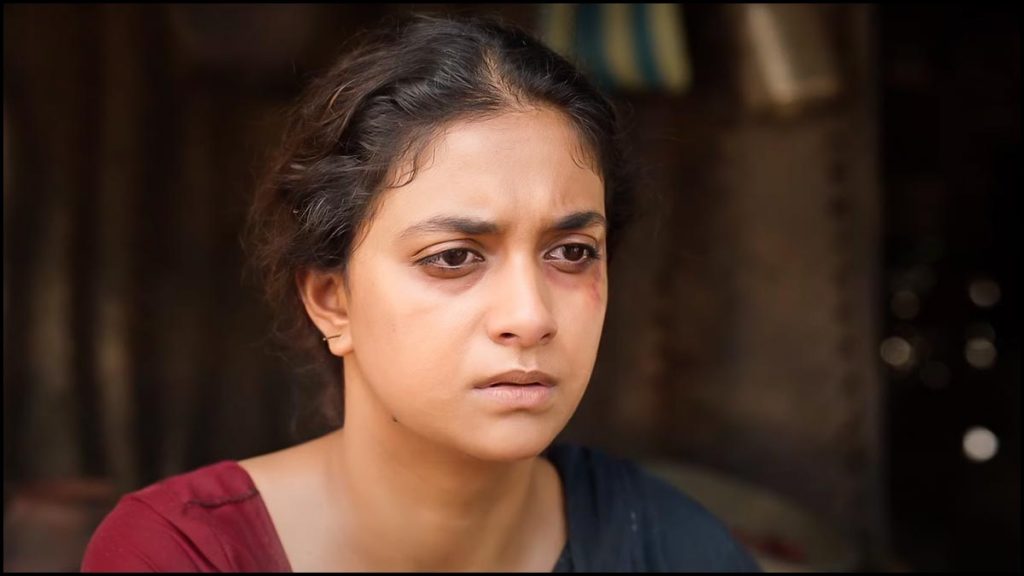 It is tough to speak comprehensively about casteism and sexism, given my privilege. However, I think I can point out that the intersection of those two regressive practices has recently been highlighted a lot with the sentiment that women are oppressed, but lower caste women are oppressed even more. Saani Kaayidham seems like the cinematic representation of that exact sentiment. Since it now exists in a time when violence against women and casteist violence is at a high in India, it’s safe to say that that (fortunately or unfortunately) makes Matheswaran’s revenge saga one of the most relevant movies of the year.

He uses the village landscape, the camerawork and lighting (to show where electricity ends and where it starts), the soundscape, and the dream sequences to deliver that casteism and oppression are inescapable for Ponni Sangaiah is well thought out and masterfully done. And the credit for that must go to Matheswaran and DOP Yamini Yagnamurthy, music director Sam CS, art director Ramu Thangaraj, and editor Nagooran Ramachandran.

From the get-go, it feels like the anger, rage, and feeling of vengeance are justified. There’s no other way around it. And when you start to think that, you realize that Matheswaran’s revenge saga employs an essential (and probably modern) theme prevalent in revenge movies, i.e., the futility of the quest. There’s a consistent mix of barrenness, exhaustion, and uncomfortably in every frame of Saani Kaayidham. Even the otherwise beautiful sunset-lit shots evoke a sense of uneasiness.

The scenes of Ponni and Sangaiah butchering the hell of the accused go on a little longer than it needs to. Why? Because maybe Matheswaran wants to make you question, “Is Ponni going too far, or is it far enough?” Matheswaran doesn’t actually provide a definite answer because where is the fun in giving the audience a definitive answer? However, the film’s final moments seem to say that, yes, revenge quests are futile, and maybe that climax of pointlessness is the only thing a person who has been wronged strives to realize.

Keerthy Suresh and Selvaraghavan absolutely knock it out of the park in the acting department. There are other actors in the movie, and their work is commendable. But (and I mean this in a good way) don’t come near Keerthy Suresh and Selvaraghavan. How could they? This is their movie, and they’ve been written to have the maximum amount of screentime, emotional reactions, and the best scream-worthy moments. However, if you have seen enough movies in your lifetime, you’ll know that just handing everything to the actors on a platter doesn’t mean they’ll eat it up.

Thankfully, Keerthy Suresh and Selvaraghavan are talented and committed enough to their respective characters to truly make you feel their anguish, exhaustion, and determination. While watching a movie – a revenge movie – if you are swept up by the feeling that you need to reach through the screen and ensure that these characters get a breather, then it means the actors have done an excellent job. And you’ll feel the urge to help out Ponni and Selvaraghavan multiple times throughout Saani Kaayidham’s 138-minute-long run time.

Saani Kaayidham is in no way an easy watch. Some scenes are blurred (which is nonsensical given the movie’s A-rating, but that’s a CBFC-related issue and not the film’s fault). And the stuff that’s not blurred will probably force you to close your eyes. However, that’s not the primary reason why Saani Kaayidham takes a toll on your soul.

Arun Matheswaran’s movie is such a brutal reminder of the arrogant status of casteism and sexism in our society and how it’s only growing with every passing day. And it’s so unwavering in its assault on minorities that the mind is cornered into thinking that violence is the only option. A type of violence that will feel redundant by the time it ends because a new flag-bearer of oppression has already become prominent. In addition to all that, Saani Kaayidham is an exquisitely crafted film, with every department firing on all cylinders and Keerthy Suresh and Selvaraghavan leading the charge with their explosive performances.