Netflix’s Jimmy Savile: A British Horror Story (2022) is a two-part limited documentary series that shines a light on the appalling predatory behavior of the titular British celebrity, who till his death in 2011 (at the age of 84) was never charged or even exposed for his horrific crimes. It is directed by Rowan Deacon, an English television filmmaker. The documentary possesses the usual engaging narrative schemes of Netflix’s true-crime documentaries, though at times it feels like it gives too much attention to a fiendish personality. However, at the same time Deacon gives a fine consolidated account of the monster’s life and times, focusing on how power and positive public perception could benefit a malevolent individual.

Who Is Jimmy Savile and What Did He Do?

James Wilson Vincent Savile was an idolized English DJ who has been widely popular in his native Britain for decades. His stardom was such that he was pals with the powerful people including the Royal Family and the then Prime Minister Margaret Thatcher. Between the 1960s and 1990s, the eccentric and charming Jimmy Savile reached everyone’s home in the UK through the much-adored BBC TV programs Jim’ll Fix It and Top of the Pops. The former targeted the kids and family audience, while the latter was largely aimed at young girls.

Born in Leeds in 1926 to a working-class family, Jimmy Savile worked as a miner in his adolescence. He successfully presented himself as a man who never forgot his roots. His northern-English accent made him an authentic and warmth-inducing personality. As Jimmy himself confesses in his perplexingly perceptive interviews, he gradually cultivated his charming personality among the British public. Everything from his unconventional platinum-dyed hairstyle, flashy attire to the large cigar and zany comedic speech rendered him instantly recognizable and sort of helped him strengthen his image as a public figure. 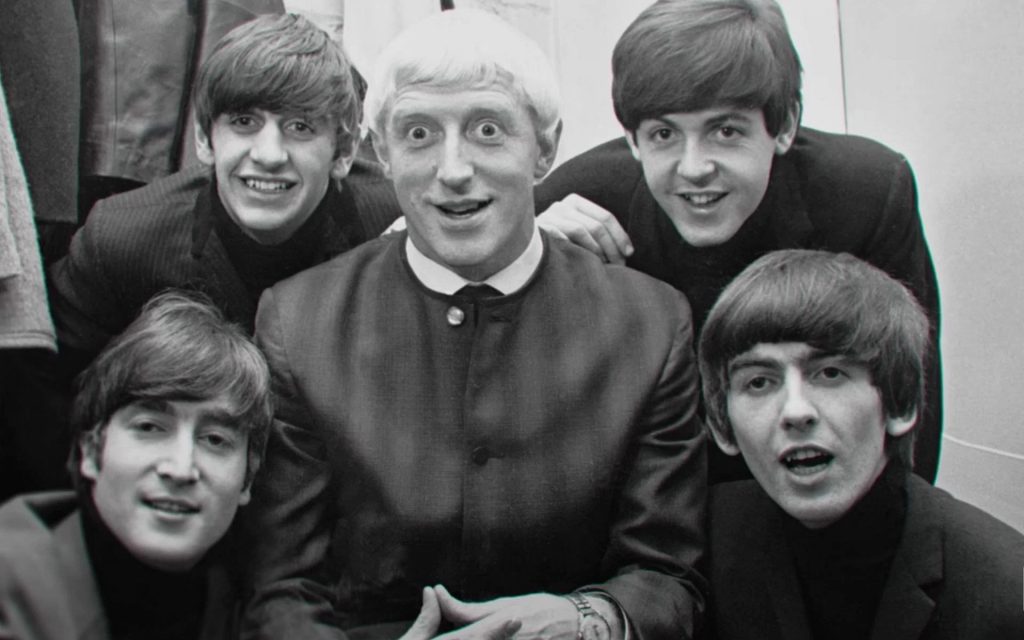 In one of the news stories, Jimmy Savile is lionized as a ‘public property’. And it’s important to note that he wasn’t just a popular television personality. “The greatest trick the devil ever pulled was convincing the world he did not exist”, goes a memorable quote in Usual Suspects (1995). In Jimmy’s case, the devil positioned himself as an angel. He was championed for his philanthropic works. Starting with his volunteer work at Leeds General Infirmary to his later massive funding campaigns, his alleged social work raised him to the status of a messiah. Furthermore, the clips of Jim’ll Fix It shows that he was the Father Christmas to generations of children.

The Many Facades of Jimmy Savile

In his heydays, Jimmy Savile did a lot of charity work that reinforced his image as a selfless man. Questions of publicity are easily brushed aside since his philanthropy’s effects were witnessed in real-time. He ran across the country for charity. But what particularly turned him into a ‘national treasure’ was his groundbreaking fundraising campaign for the Stoke Mandeville Hospital for paraplegic patients. In the 1980s, Jimmy Savile raised over 10 million Euros in order to create the hospital’s spinal cord injuries center. This brought upon him nationwide attention plus the friendship of the Royal Family, especially Prince Charles and Princess Diana.

It was also the time he was on friendly terms with Margaret Thatcher. The now revealed documents show letters of Prince Charles to Jimmy Savile, asking his advice on important matters. Thatcher during her regime had repeatedly pressed the members of the Royal Family to bestow upon Jimmy Savile the title of Knighthood. That was the kind of influence Jimmy gained at the height of his career. The hugely successful fund-raising campaigns and his aura among the general public naturally drew the attention of the establishment. It presented him as a force to be reckoned with. One could never know how much Jimmy Savile’s powerful friends helped him to maintain his facade, but his stature at that time definitely framed him as an ‘untouchable’.

Jimmy never married and kept portraying himself as the kind of busy man who didn’t have time for personal life. He was said to be close with his mother. She passed away in 1972, and as the documentary attests it was probably the only time he was ‘emotional’ in public. Of course, the journalists kept scrutinizing him about his personal life, which he often brushed aside with one funny rejoinder or the other. In hindsight, as the documentary’s subjects regard, Jimmy Savile employed smoke screen tactics to take away the media’s attention from his shocking sexual offenses. This includes confessing to the media about his ‘many young girlfriends’, and his penchant for violence from his pro-wrestling days. As one reporter says, it’s a presentable darker side as opposed to his inherent rottenness.

One of the most intriguing interviews in Jimmy Savile: A British Horror Story is that of the television presenter Selena Scott. She interviewed him in the 1980s when Jimmy was at his ‘most flirtatious mode’.  Jimmy’s banter skirts the boundaries of outright creepiness. The older Selena Scott looks at the footage and notes with a hint of pensive sadness, “The camera lies”. Looking from today’s perspective, especially after the #MeToo movement, it’s unbelievable how much the male celebrities got away with their behavior on-screen. Sexism was prevalent in many areas as part of the media atmosphere too, and a male celebrity ogling a female presenter was accepted as light-hearted entertainment.

However, even in other situations when Jimmy encounters tough questions from interviewers, he uses humor and his image as a ‘ladies man’ to cover up his evil core. The interviews Jimmy has given over the years reveal how he was hiding his monstrosities in plain sight. Philanthropy had been a veil for this inhuman pedophile. It’s shocking how he kept on his act for more than five decades.  Rowan Deacon’s interview subjects also offer an interesting hypothesis on how his religious perception pushed him towards charity, in an effort to score a little more on the ‘virtues’ side.

Jimmy was a staunch Catholic; a religious institution for some time that has earned ill-repute due to its systemic child sexual abuse. In fact, the narrow religious dogmas of sins and virtue have done more harm than good. Moreover, children and other vulnerable groups have suffered a lot because of such institutionalized religious groups. It’s alleged that he somehow knew he would be punished for his countless paedophilic crimes. Hence, some of the slip-ups in the interviews were not simply slip-ups, but a confession of sorts. Did he live and die with the fear of going to hell? We don’t know. Though I am an atheist, in this case, I hope there is a hell. Because there’s no other sense of justice. All the institutions that were there to protect the vulnerable have shamefully failed.

Truth is Horrific than Fiction

In one of the archive footage featured in the documentary, it’s mentioned that ‘this is the kind of horror even Stephen King himself would struggle to write’. Jimmy Savile couldn’t be exposed till his death, not simply because of his tricky behavior but also due to the negligence of people who had the power to act. Investigative journalist Meirion Jones and Mike Hames – who was part of the UK’s first police unit to deal with child sexual abuse cases – corroborate that victims have come out to complain to the police and talk to the media houses even back in 1994. Later, in 2009 – two years before Jimmy’s death – there were strong testimonies against him to make a case. However, law enforcement has subtly discouraged the few victims who came out. On the other hand, the stories in media were swiftly buried using high-priced litigation lawyers. 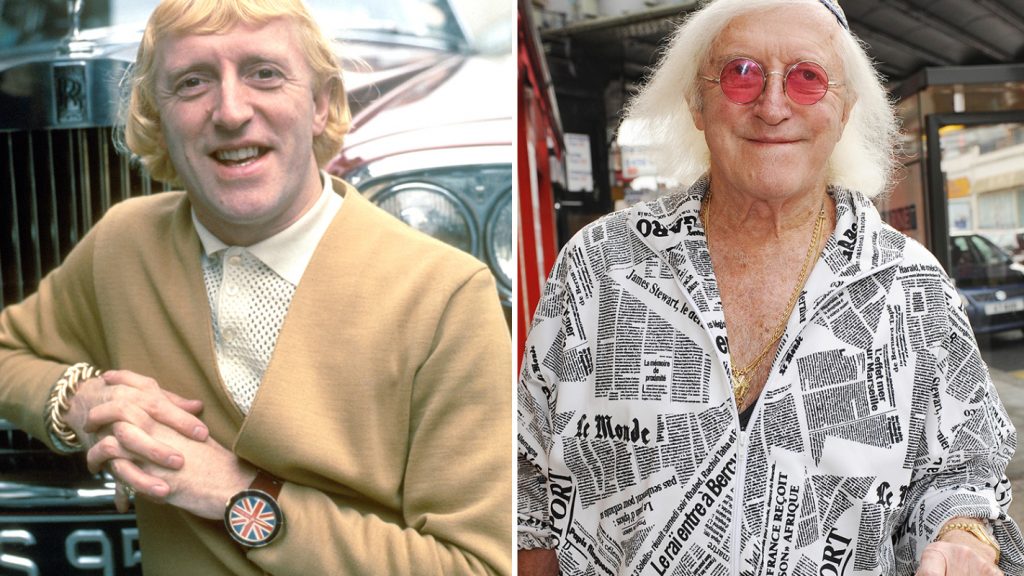 Upon Jimmy’s death in October 2011, everyone from politicians, BBC the celebrities mourned him as a national hero. However, in November 2011, BBC Newsnight started its investigation on the numerous allegations against Jimmy Savile. BBC, unfortunately, dropped its investigation in December stating its story isn’t strong enough. It’s a very poor decision on the part of the BBC. Though BBC is now comfortably putting up a drama series on Jimmy Savile’s‘ The Reckoning’ (with Steve Coogan playing the sexual predator), it didn’t act when it mattered.

One could say BBC never had an idea of what was going on. Even if we agree on that, we also wonder how much it has failed to address its institutional failure, particularly now it’s public knowledge that Jimmy abused many children and young girls within the BBC premises. As BBC’s own inquiry (Dame Janet Smith Review) concludes, there were at least 72 people who are the victims of Jimmy’s sexual crimes while he worked at BBC. Many of BBC staff were aware of these allegations. But the absurd work culture of ‘no complaining’ kept many from passing the information.

Eventually, Jimmy Savile: A British Horror Story is important for the way it probes into the societal failure at all levels when it comes to confronting a powerful public figure. It does suffer a bit from Netflix’s true-crime assembly-line aesthetic, which at times focuses more on dispensing the information than provide a  deeply perceptive look at things. Moreover, there have already been articles indicating the details the docu-series has omitted. At the same time, the answers to a lot of questions in Jimmy Savile’s case are yet to be found. Regardless of the omissions and the patchy areas, from what’s covered we are left to uncomfortably reflect on the things that have changed and not changed from Jimmy Savile’s time.

Jimmy Savile: A British Horror is now streaming on Netflix