The moral outrage and distress one feels after watching Netflix’s The Trials of Gabriel Fernandez (2020), directed by Brian Knappenberger, is just indescribable. The six-part docuseries chronicles the hard-to-digest 2013 murder case of 8-year-old Gabriel Fernandez in the hands of his mother and her boyfriend, in Palmdale, California. The Trials of Gabriel Fernandez also details one of the most horrific cases of child abuse which persisted over a period of eight months. More harrowing is the criminal negligence of law enforcement officers and social workers.  Based on the extensive reporting on Gabriel’s case by former LA Times journalist Garrett Therolf (without his in-depth chronicle the outrage over Gabriel’s murder would have evanesced), the Netflix series delves into the complex layers surrounding this tragedy.

On May 22, 2013, responding to a 911 call from Pearl Fernandez paramedics found the badly bruised 8-year-old Gabriel Fernandez on the floor of his Palmdale home. Cracked skull, cigarette burns, broken ribs, missing teeth, the hospital staffs were horrified by the state of Gabriel Fernandez. It was obvious that Gabriel’s unresponsive state is more than the result of a playful altercation he had with his elder sibling as told by the mother. On May 24, 2013, the boy was declared brain dead and taken off life support. Then following the investigation and arrest of Gabriel’s mother Pearl Sinthia Fernandez and her boyfriend, Isauro Aguirre, all the heart-wrenching details came out. 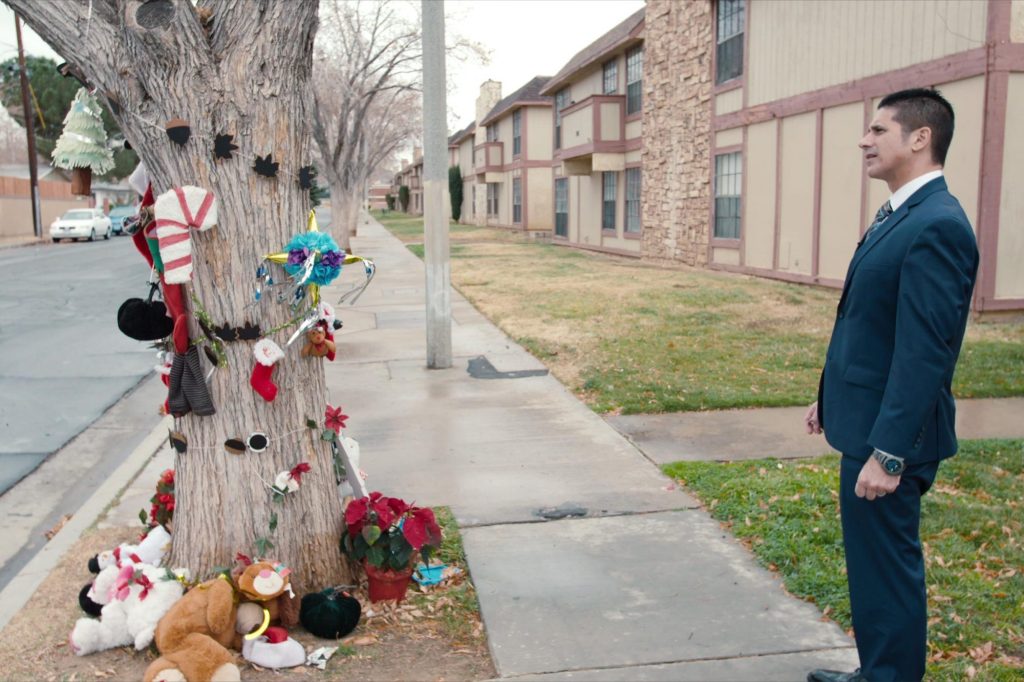 During the eight months Pearl and Isauro had Gabriel under their custody, the boy was subjected to torture, which included putting out cigarettes on him, regular beatings, shooting him in the face with a BB gun, forcing him to eat cat litter, and bounded & gagged he was locked inside a cupboard for hours. The motivation behind such disturbing torture remains ambiguous. It was alleged that Aguirre’s belief that the boy was gay was one of the reasons for this horrific abuse. Neglected by his mother Pearl, immediately after birth, Gabriel was raised in the loving household of his homosexual uncle and his partner, and later he moved with his grandparents. Described as ‘kind’, ‘sensitive’ & ‘caring’, the photos of ever-smiling Gabriel adds more agony while mulling over the unimaginable horror this child endured.

Related to The Trials of Gabriel Fernandez – Unbelievable Netflix (2019) Review: The Truth Will Set Us Free

What’s harder to contemplate apart from the monstrosity of Pearl and Aguirre is the indifference of systemic forces that are very much in place to protect the vulnerable. Upon seeing the visible signs of abuse, Gabriel’s first-grade teacher Jennifer Garcia (who herself is a bit of a shady character) reported to the Department of Children and Family Services (DCFS) multiple times. Yet the social workers and law enforcement officials repeatedly declared that the complaints are unfounded. At one point, the LA police officers reprimanded Gabriel to stop lying when there were clear indications to the contrary.

The prosecution led by Deputy District Attorney Jon Hatami sought the death penalty for both Aguirre and Pearl, for which he has to convince the jury that it was a pre-meditated act, and not committed over a fit of rage as the defense for Aguirre argued. It was poignant to observe Hatami’s deep involvement in the case, who opens up at length about his own personal traumatic experience of abuse suffered at the hands of his dad. Isauro Aguirre was eventually sentenced to death, and Pearl Fernandez received life sentence without the possibility of parole (since she plead guilty).

What was unprecedented in Gabriel Fernandez’s case is that the four social workers who failed the boy were charged with criminal negligence by the District Attorney. The series mildly suggests that singling out four social workers is simply the county’s way of doing damage control. It also looks at the pressure and moral quandaries the over-worked civil servants face in their day-to-day professional life.  Of course, the four social workers responsible for handling Gabriel’s case aren’t easily left off the hook (in January 2020, California’s appeals court dismissed the charges against the social workers). But like a true work of journalism, the docuseries makes space for all sides. Equally impressive and deftly ambiguous was the inclusion of character witnesses’ testimony who testified on behalf of Aguirre when the court was deliberating on handing him a death sentence (one says, “he was just a down to earth nice person, always willing to help”).

Told in a very straightforward manner, The Trials of Gabriel Fernandez doesn’t have many mysterious elements attached to it. But director Brian Knappenberger uses Gabriel’s murder to profoundly look at the wider issues plaguing the social services system in the US. The fourth episode is particularly riveting as it deeply reflects on the flaws within the government agencies that’s steeped in secrecy and self-preservation rather than provide the necessary services to the needy and the vulnerable. A former member of DCFS states, “Bureaucracies tend to preserve themselves and those with power. So, if those of us who are at a lower level try to indicate that there are problems, we become the problems, and they do what they can to maintain the status quo.”

The fact that the government agencies didn’t learn their lessons from Gabriel’s case is pretty evident as the series reveals that a 10-year-old Palmdale resident, Anthony Avalos was allegedly tortured to death (five years after Gabriel’s murder) by his mother and her boyfriend. Another horrific case mentioned at the end of docuseries is 4-year-old Noah Cuatro’s death. Both Noah’s parents were indicted on murder and torture charges. Another outrageous statistic recounted in the documentary was that nearly 150 children in Los Angeles County have died of neglect and abuse since Gabriel Fernandez’s death (all at one point or another were under the scrutiny of DCFS).

Though at times The Trials of Gabriel Fernandez feels like a visual equivalent of a Wikipedia page, Brian Knappenberger strongly examines the themes of evil, morality, and justice. The series ends with making us comprehend the reality that the bone-chilling murder of Gabriel Fernandez was not just an isolated case of pure evil: “It’s in the looking away when you have a power to make the difference that is true evil.”

One aspect that inflicts a conflict within ourselves while watching such well-presented and structured true-crime docuseries is the way we are addicted to it. I constantly question myself about being attracted to the ‘charms’ of true-crime and consuming it like a commodity.  Of course, as an ethically minded individual, we are enraged at the gross social injustices. But being obsessed with such content may also desensitize viewers. Nevertheless, true-crime docuseries are being primarily made to educate and mobilize the streaming populace against injustice. Thankfully, The Trials of Gabriel Fernandez fulfills that bigger need to educate without becoming a prurient entertainment for our 21st-century digital culture.

The Trials of Gabriel Fernandez Trailer