House of the Dragon (Season 1), Episode 1 Review, Recap & Ending Explained: House of the Dragon, the highly anticipated prequel series to HBO’s gargantuan success, Game of Thrones, has finally arrived. The first episode aired this Sunday with a little over an hour’s run time. The story is set 172 years before the birth of Daenerys Targaryen when dragons and their Targaryen riders ruled over Westeros. With a significantly higher budget and hype than Game of Thrones when it first aired in 2011, ‘House of the Dragon’ immediately sinks its teeth into the grandiose. Without sacrificing the politics, violence, and scheming (also nudity) that the core of ‘GoT’ fans loved to see.

The Queen that Never Was

The wheel of patriarchy that Daenerys devoted her life to breaking in ‘GoT’ is fully set in motion when King Jaehaerys overlooks Princess Rhaenys (Eve Best), the older descendent, for the younger Viserys (Paddy Considine). Rhaenys marries Lord Corlys Velaryon (Steve Toussaint), who later becomes one of the key members of King Viserys’ council. Princess Rhaenys thus becomes ‘The Queen that Never Was’. The reason is apparent. There has been no queen in Westeros, and it will not be. It is needless to express that Rhaenys will harbor a fair amount of resentment going forward.

The Heir Problem for Viserys

We then move forward, and Viserys is a fairly successful ruler in his ninth year, albeit plagued by the same heir problem. Not due to lack of effort, though. Viserys and his queen, Aemma (Sian Brooke), do not have a son. Aemma has been pregnant multiple times with unsuccessful tragedies. Their only living child is their daughter, Rhaenyra (Milly Alcock playing the younger version), who loves to ride her dragon early on.

Just like Jaehaerys before him, Viserys also feels compelled to overlook the female heir and craves a son, even though he genuinely loves his daughter. Aemma gets pregnant again, and Viserys pins all his hope on that.

Viserys’ brother, Daemon (Matt Smith), is shown to be ambitious and ruthless. His extreme violent approach to leading the city’s watch to stomp out crimes meets with vituperative criticism, especially from the Hand of the King, Otto Hightower (Rhys Ifans). There is no love lost between Daemon and Otto. Viserys, however, is not averse to Daemon. Quite on the contrary, he is affectionate towards his brother. 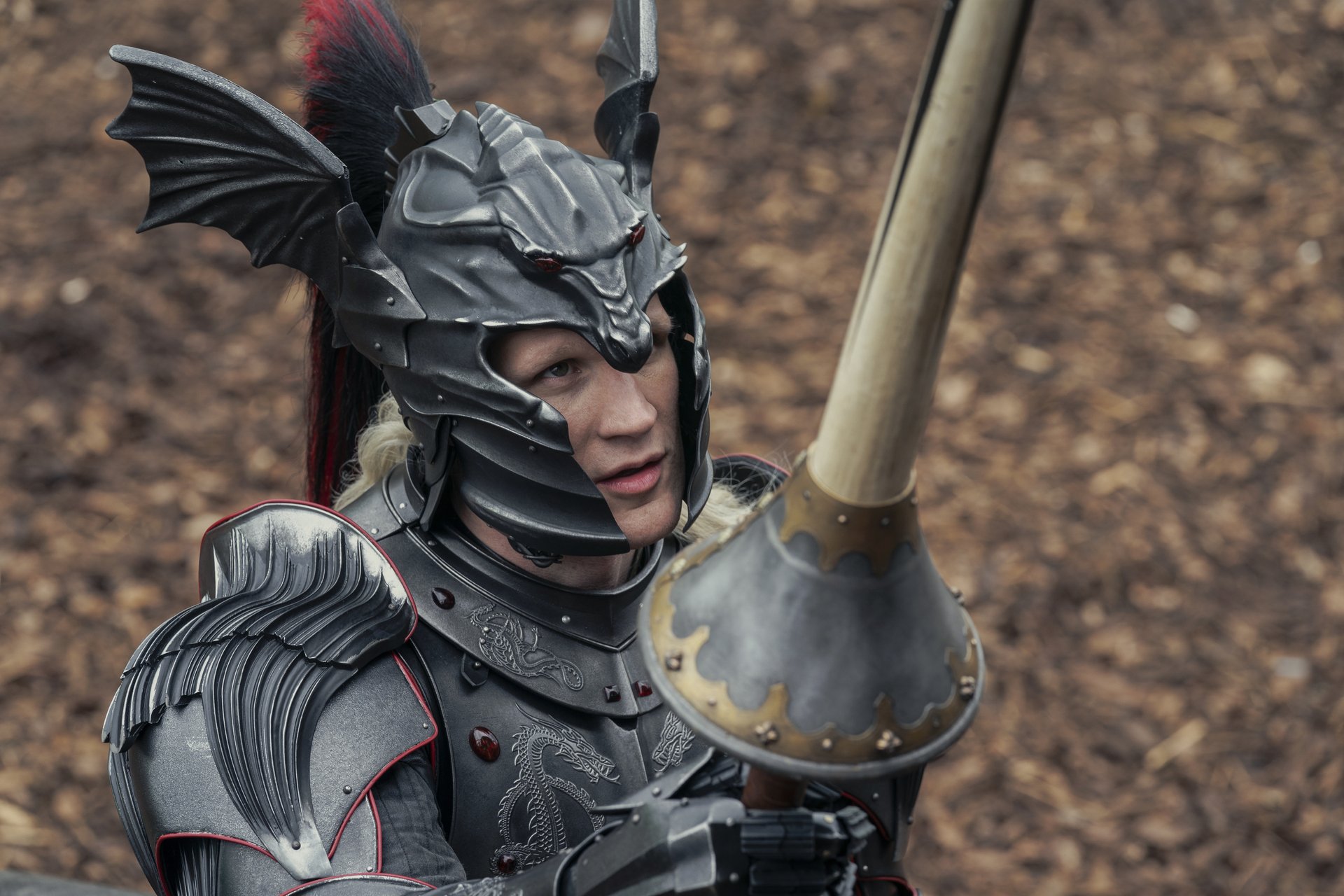 In the tourney, organized to commemorate the birth of the King’s son and heir (Viserys was confident of the baby’s gender), Daemon shows his prowess as a warrior. Defeating many knights in the joust, it seemed he was on his way to becoming the champion. However, he is beaten by a young knight, Ser Criston Cole of House Cole, a relatively lesser-known house.

‘House of the Dragon’ does seem to be cut from the same cloth. The script, written by Ryan J. Condal, establishes the key players and their key weapons astutely. Politics, scheming, backstabbing, and revenge: are pillars that Game of Thrones relied upon. With the addition of visual spectacles that Game of Thrones picked up in its later seasons. The CGI is now top-notch, and the dragons feature heavily and beautifully. Add to that the impeccably shot spectacle that was the tourney joust.

Like Game of Thrones, ‘House of the Dragon’ also features a cast that has the potential to sweep a lot of awards in the acting department. Paddy Considine as Viserys has started to show his mettle. Matt Smith does look like he could be the early Jaime/Tywin charismatic baddie. As the young Rhaenyra, Milly Alcock is touted to be the show’s protagonist. As a pilot, ‘The Heirs of the Dragon’ achieves the mammoth task of satisfying its predecessor’s hype and keeping us eagerly awaiting the next episodes.

House of the Dragon (Season 1), Episode 1 Ending, Explained: The Seeds of a Familial Feud

Rhaenyra is named the heir

During the tourney, queen Aemma goes into labor, and complications arise. King Viserys is presented with the unenviable task of choosing between his child and his wife. Desperate to have a son, he decides to sacrifice Aemma. However, in a catastrophic twist, the newly born son also does not survive more than a few minutes.

Otto suggests the King not make Daemon the heir. Not every one of the council agrees with that. The King himself being one. However, Daemon’s proclamation on the night of Aemma’s death, in one of the brothels, reaches Viserys’ ears. Daemon has called the now-dead son of Viserys ‘The Heir for a day’ and celebrated with his soldiers of the city watch. This information changes Viserys’ opinion about Daemon. 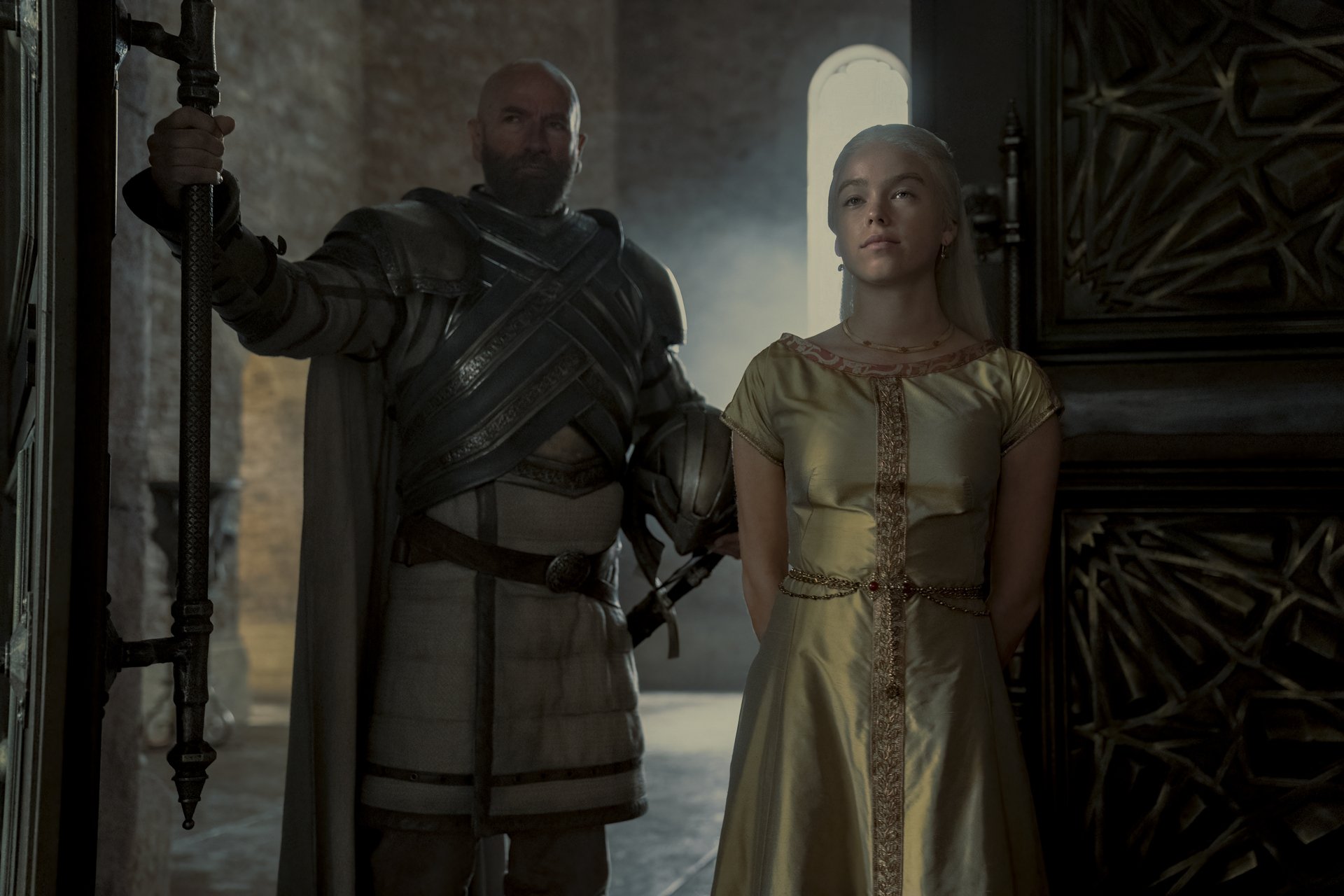 Viserys strips Daemon of his commandership and asks him to return to Moonstone. Viserys proclaims that he will make Rhaenyra the new heir. The ceremony of officiating Rhaenyra is attended by many Lords, including Baratheons and Starks.

A Song of Ice and Fire

Before the ceremony of officially proclaiming Rhaenyra as the heir, Viserys has a heart-to-heart with his daughter. Viserys passes a family secret to Rhaenyra. The reason the first Targaryen king, ‘Aegon the Conqueror’, united the seven realms is a vision he had. A vision where he sees the whole world of men ended by a cold winter. Aegon saw that from the distant north, terrifying darkness engulfed the entire humanity.

He also claimed any chance of survival from that threat depends on a Targaryen sitting on the throne, regardless of gender. Aegon called this prophecy ‘A Song of Ice and Fire.’

What to look for in the next episode?

Apart from Daemon, the decision to make Rhaenyra the heir should not go down well with Rhaenys, who was overlooked when it was her turn. Otto Hightower also tacitly places his daughter, Alicent, in the companionship of the much older and now incredibly lonely King. Viserys’ complete trust in Otto is a fascinating angle to explore.

The King constantly getting cut by the sharp edges of the iron throne provides a fine setup. Both metaphorically and literally. In a literal sense, a wound in Viserys’ body reeks of septicemia. In a metaphorical sense, the King does not know from where the next cut, the next betrayal could come.

Where to watch House of the Dragon