Home»Articles»The State of Modern Comedies – Solution I: Everything Is Terrible!- Playing Upon Expectations
Articles/Essays

The modern “comedy” movie, with its genre confusion and lack of humour that has been accepted by film culture, is probably not about to integrate a more experimental reforming to improve itself. But thankfully there are still comedian filmmakers in the fringes working on successfully expanding upon how films can make an audience laugh.

The internet has been something of an avenue for the new generation of filmmakers for close to a decade now (around the same time YouTube has existed), especially for those carving a far more niche fan-base.

And so we have Everything is Terrible, a YouTube channel that posts the wildest, weirdest, and wackiest moments taken from VHSes of long forgotten B-movies, promotional videos, horrendously dated commercials, instructional tapes, workout videos, and, of course, Christian puppet TV shows for children, most of which originate from the ‘80s throughout to the early ‘00s at the latest.

Through portraying only the most horrible highlights of these source materials, EIT’s videos featured some very finely pronounced editing that would humorously abbreviate the content down into unpredictable, yet amusingly satisfying ways. This sort of editing was also used to sharply juxtapose various emotions within these sources for added hilarity. The hard edit early on in their most popular and infamous video, DUANE!!!, will give you a pretty good idea of how this comedy team can illicit such a laugh with such a simple edit. 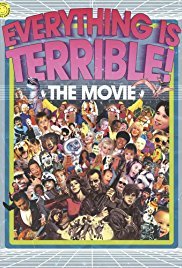 But the movies that they created, the first being released in 2009, were a completely different beast. They didn’t just present the oddities of these unusual videos. They compiled them together in a stream-of-consciousness montage editing style, combining short different clips from their array of video material to form sentences from each other, showcasing in rapid fashion all of these videotape atrocities and recontextualising them with some sort of vague and abstract narrative.

Here’s a quick abbreviated example of how these movies (or comedy montage documentaries as I call them) played out. In the more sophisticated way that EIT edited this crazy content together, it was no longer the crazy content itself that was the star, but EIT themselves. One of the biggest take-aways to garner from these comedy movies is the element of surprise. These clips cut in and out of such a wide variety of sources at such a rapid pace, the succession of jokes and humorous cuts can make just one minute of these films provide more laughs than an entire narrative-based comedy film. The sudden changes in mood or aesthetics between each edited clip is how these kinds of montage-based films keep up the sense of hilarity for up to an hour or more.

The different style of editing humour came from the different members of the group. Some took delight in the basic juxtaposing ways of editing this material against 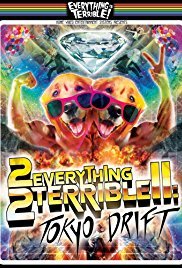 themselves and each other. Others found humour in a far more surrealistic, experimental, and downright terrifying way, transforming supposedly innocent material into a nightmarish hellish presentation. All these different styles of editing came together in these movies that were a group effort between all members.

Each of the movies that have approached this unique editing style from a different angle, though the first sequel elevated the energetic pacing, filled with even more bizarre clips edited even more ferociously together. 2Everything 2Terrible 2: Tokyo Drift was unleashed in 2010 and really upped the benchmark and set the template for these stitched-together movies. 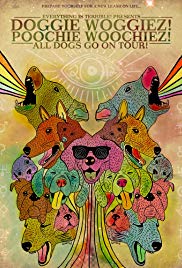 But the good folks at EIT decided not to keep repeating themselves and instead opted for giving themselves restrictions to keep their content refreshing (another creative ethic proper comedy filmmakers ought to mimic). So they remade The Holy Mountain using only footage of dogs. Yes, that is the basic, yet confounding idea behind Doggiewoggiez! Poochiewoochiez! (2012), which not only limited the zany source material to canine-only clips, but also had to structure it to mimic the classic art-house midnight favourite. There’s no real underlining reason this was all done, but the result is nonetheless a thoroughly creative psychedelic experience, one profoundly bizarre enough to melt any dog-lovers mind.

These kinds of specials are usually made up of the reoccurring videos that the EIT gang keep happening upon, and so a Christmas special was inevitable. Since there’s 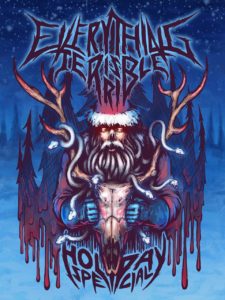 hardly anything bad to say about Christmas (or Hanukah, which gets its own 10 minute segment), this special ends up being the less cynical of their films, but hardly any less hilarious, since the joys of the festive holidays have provided plenty of utterly camp and unintentionally hilarious material throughout the most horrifically outdated parts of the ‘90s. 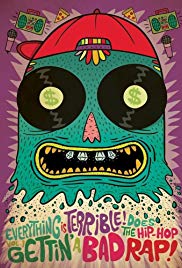 EIT put themselves under their two biggest restrictions yet in 2013, firstly with EIT! Does the Hip-Hop Vol. 1: Gettin’ a Bad Rap!, which was compiled of clips from one of the worst trends of the ‘90s – mostly white people with absolutely no understanding of rap music trying to capitalize on its popularity. Aside from the three and a half intro, the rest of the 48 minute film is one long string of awful rapping, all of which tinged with an awkward, soulless, corporate spirit. It all truly is what 2Pac died for.

They kept up the limitation later in the year with Comic Relief Zero, which was compiled of only clips from terrible stand-up “specials”. 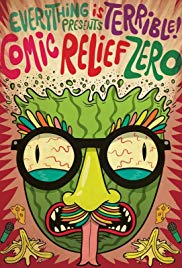 Working with less visual variety, as most clips just featured a comedian with a microphone in front of a brick wall, proved not to hinder EIT’s unique cultural retrospectives. The sheer overlap of the content in these “specials” worked in EIT favour for structuring Comic Relief Zero around compilations of the similar material this variety of comedians had – there’s the “you heard about” set-ups, the “what’s the deal with this new technology”,  impressions, terrible audience interaction, stupid prop work, racially insensitive gags and impersonations of Asians, and the final lines before the “thank you and good-nights” (many of which accompanied by a song). 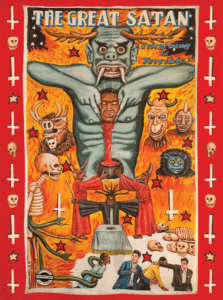 Five years past as EIT continued to flourish and, just after their ten year anniversary, unleashed The Great Satan (2018), their latest and longest entry (at almost regular movie length of 72 minutes), made up of over 10,000 different source materials, most of which are taken from the crème de la crème of EIT videos – all things Christianity. This includes nonsensical Christian sermons, horrifying presentations about the “realities” of a Christian Hell, fear-mongering edutainment videos (for kids!), trashy Satan-related horror B-movies, and, of course, Christian puppet TV shows for children. This all makes for EIT’s most subversive film, recontextualising all the ridiculous ideologies so common of American Christianity in the ‘90s and juxtaposing them together to reveal how ridiculous this kind of religious-based moralising was in these dark times of this VHS era.

This fresh, brand new kind of comedy may seem fairly experimental within the safe realm of modern comedy, though this montage work should be viewed as some form of inspiration for the new and improved wave of comedy movies. It is of course the editing that needs to be considered, how it constructs such radically conflicting moods, how it rapidly overwhelms with its barrage of content, and how it elevates the campness of nostalgic media from very recent history to its highest comedic effect.  These groundbreaking films from Everything Is Terrible are worth watching to see how the element of surprise and recontextualisation can have such humorous value. Just maybe don’t watch them all in one go, or you might overdose on ‘90s nostalgia.