Mustang (2015) is not exactly an easy watch. As much as the beautiful frames are there to please your eyes; the film is really intense, often sad and sentimental, and a very demanding watch. Now, the subject matter is nothing new or innovative. There have been films where the females are being oppressed by a conservative male chauvinist society and they are trying to break the shackles and thus facing all the troubles in the world (Marjane Satrapi’s brilliant Persepolis, which was adapted from an even more brilliant graphic novel penned by the same awesome lady is one profound example of that) in the past.

But even then, Mustang stands out because of its treatment. I really liked it, felt it even though the world of the movie was completely non-relatable for me. I was deeply moved and thought that I should write about it because a film like this one deserves to be talked about and discussed among people who have a love for cinema.

In a very deceptive manner, Mustang (2015) starts with a group of schoolgirls (consisting of the five orphaned sisters who are the main characters of the movie) playing a game and having harmless fun with a few boys, who are most definitely their classmates. It almost feels like one of those routine romantic comedies featuring teenagers. But of course, within a few minutes, we find out the five girls are being almost grounded by their grandmother, because of their “so-called indecent act with the boys”.

In an unnamed rural Turkish town, these girls are living with their extremely hyper, dominating uncle and conservative grandmother; within the high walls of a hyper-conservative male dominating, almost claustrophobic society. Each one of them, in their own different way, wish for a better human life and long for freedom, collectively and every now and then, their dreams, hopes, and desires are crushed by their uncle and grandmother (and the society). Throughout the whole film, a kind of war (of course, in a metaphorical manner) runs between these two sides, the oppressed (the girls) and the oppressor (their uncle and the society). 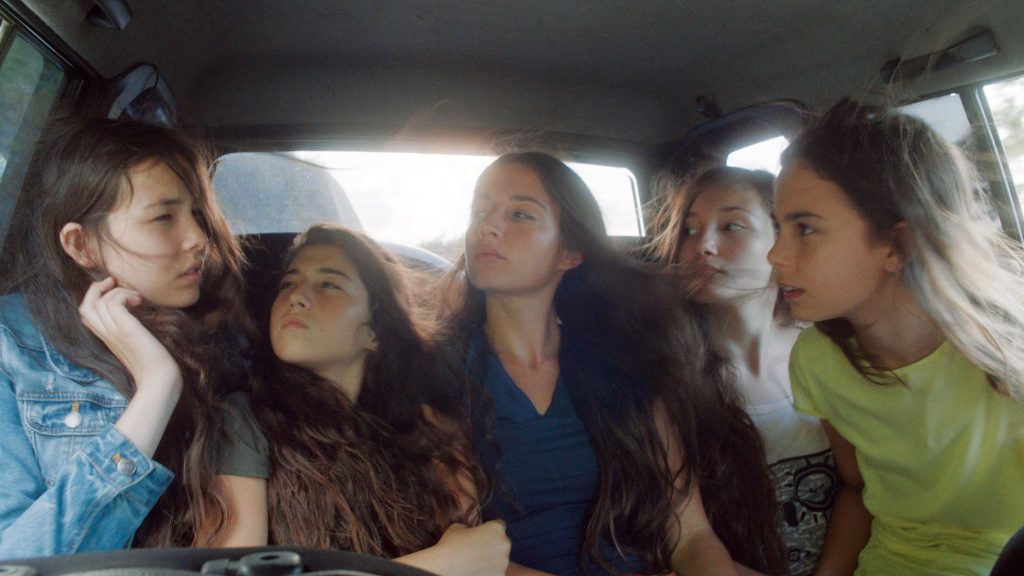 There is not much to talk about the basic story of Mustang (2015). What makes the difference is the way it is told. In a sheer genius move, the director uses the youngest girl as the narrator and tells the story from her perspective. The movie becomes only what she sees, what she feels, and how she thinks. But while looking at it, we get a clear idea about what is happening around this little girl. Although the narrative is simple and straightforward, a lot of subtle hints are spread all over it. In fact, in one particular scene of the movie, one of the characters ask another if she can read between the lines. The film, in a way, asks you to do so with it as well.

As far as the technicalities go, everyone in the cast has done a wonderful job; especially the one who played Lale (Güneş Şensoy). The direction is great (round of applauds for first-time director Deniz Gamze Ergüven), the cinematography is beautiful and the background score works extremely well with the tone of the movie.

Watching Mustang (2015) is a very demanding thing. It almost feels like crawling through a dark tunnel with no hope whatsoever. But finding a bit of light at the end of the tunnel is what makes the experience worthy, and satisfying. The ending is not exactly a happy one, but not a sad one either; as it does offer a glimmer of hope and happiness, but does remind you of the horror as well.

Mustang (2015) was (deservingly) nominated for the “Best Foreign Language Film” at the 2016 Academy Awards. Whether it wins or not, this film remains so very special and a worthy addition to the list of finest coming-of-age movies of this modern era. Watch it, feel it and shower it with all your love.