Being brave and scared are two very closely intertwined feelings. Ram Madvani’s Neerja (2016) tells us that no education can teach you to be brave. It just takes that extra bit of human spirit that needs the right trigger at the right moment. While Neerja does undergo the typical melodramatic turn, the emotions seem more real than they are made out to be.

Thanks to a wonderful cast of performers and an equally balanced team behind the camera, the film never fumbles and mostly hits all the right notes. Reporting in, Neerja (2016) is a true biopic that portrays bravery in a time of dire need. It shows how a 23-year-old girl saved the lives of over 300 people while facing both – the wrath and the guns of the Palestine terrorists.

There is so much to like in Neerja (2016). For starters Sonam Kapoor’s effortless performance makes you believe that she is in fact  Neerja Bhanot herself. Ram Madvani’s nuanced take on this Rajesh Khanna fangirl who throws the very famous “Babumoshaaye Zindagi Bade Honi Chaiye, Lambi Nahi” right off the bat and then later exemplifies it into action. The perfect use of hand-held and still cameras to deliver the much-needed tension and the emotions respectively.

Saiwyn Quadras’s exceptional screenplay juggles through multiple hoops ranging from a middle-class household to the terrorist camp where bombs and sweets are blasted along with the happy cheerful blast of balloons at a colony function. And also that very beautiful motherly touch that just makes everything perfect. 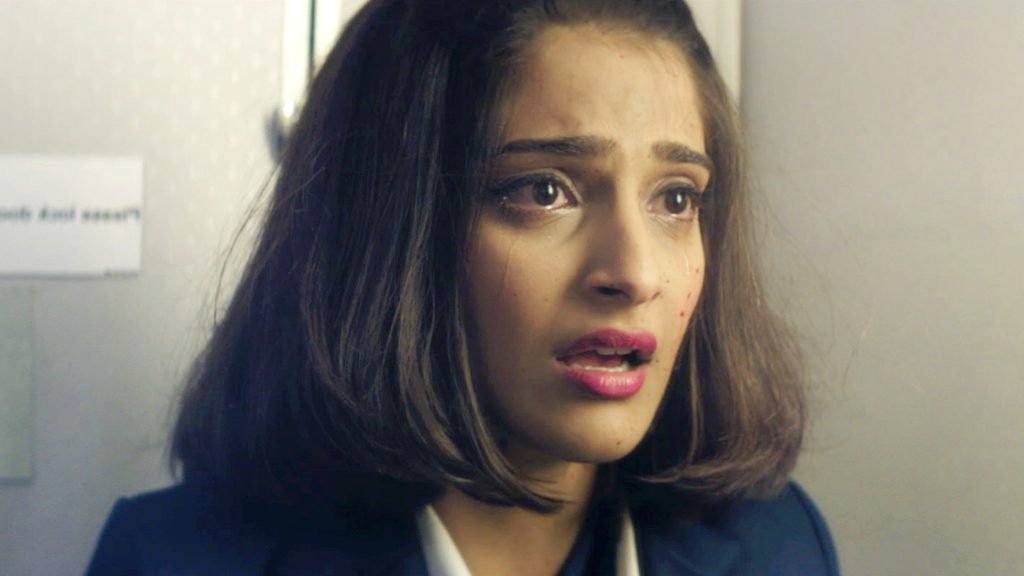 Neerja (2016) is a great film, it jumps over cliched biopic hurdles or the cliched hijack situations even though it does poses the typical grandmother, pregnant lady, and children to account for its negatives. However, the film never really goes into their own dilemma and focuses on Neerja’s bravery over everything else. It manages to act like a gripping thriller as it intermixes various emotions of being scared along with a mother’s angst and a girl who never wanted to be a hero but wanted to do her job well.

Neerja (2016) is not just a story of bravery. It also dives into a girl’s oppression as she gives into the middle-class ethics of getting married to the wrong guy. Her struggle and helplessness as she hides from the husband who is no less than a terrorist himself have been brilliantly intermixed with her vulnerable state in the plane trying to regain all the strength that she could, reliving her father’s words of wisdom.

Neerja (2016) could have gone wrong on many aspects. It lies right on the edge of being pretentious while depicting a real-life story. But unlike Raja Menon’s Airlift, which took it too mainstream, Neerja sticks to the basics. The narrative is not shrouded by mind-wrecking dance numbers and overly loud characters just for the sake of it. Even when Madhvani uses his music numbers it numbs you deeply leaving you with a lump in your throat. There’s also a mother-daughter story for the ages. Shabana Azmi, who plays Neerja’s mother delivers such a masterful performance that it leaves you stunned, turning you into a pile of mush.

We all know how Neerja’s story will go down but the filmmakers make sure that you root for her, feel sad for her, and feel proud of her at the same moment. Neerja (2016) whilst not completely flawless deserves your attention. Do take a handkerchief just in case you plan to watch this with your mother on your side.

Neerja (2016) is currently streaming on Hotstar

The Great Cinematographers and their "Visions of Light": A love letter to the DOP