My Brilliant Friend (Season 1) Review – A story about controlled anger

I came to know about My Brilliant Friend (Season 1) through Max Richter. The story revolves around Elena and Lila and is written from Elena’s perspective as a flashback. It’s about the city of Naples, particularly this neighborhood which is a little too orthodox in its living. When I first sat down to see the show, I saw a lot of controlled anger in each one of these characters. This anger mostly bubbles up to a place where they do horrible things.

Perspective plays a big role in this story and through the lens one sees what these 2 girls feel about each other or the society so the conversation happens only through them. One other thing that amazed me was to feel that as an audience the show constantly pushed me to support either of the two characters, much like a novel that shifts gear with each chapter. The constant push and pull as to which of the two is the more likable one made this all the more interesting.

Similar to My Brilliant Friend (Season 1) – MUSTANG [2015]: THE OPPRESSOR VS THE OPPRESSED

The episode where Nino, Elena’s childhood crush leaves town was heartbreaking and it was shocking to have fallen for these characters instantly. The male characters and their upbringing were not shocking to watch. The forcing, rape, violence was very much a part of that time and still is and plays a big role for Elena and Lila to push forward as characters. And that’s the beauty of Elena Ferrante’s work to have significance through time. 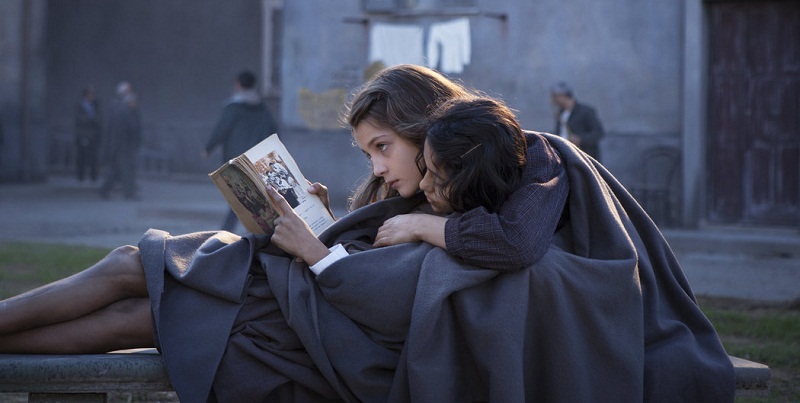 Elena rightly describes the neighborhood to be a vortex and any attempt to climb out was delusional. The episodes having a title give a whole picture to that part of the story and I really like that. However, what I want to focus on is the friendship these girls share amidst all the hatred. I have never had the opportunity to face the truth of friendship and the complexity it deals with. Elena and Lila are both bright and powerful girls with such opposite personalities having their differences yet they love each other.

Lila is competitive and I often felt she tried to make Elena feel bad and yet their truth lies to stay together to survive in this neighborhood. Lila pushes Elena to fulfill her dreams, protect her and still tries to out her. Elena portrays the awkwardness of adolescence with sensitivity.

The local language used by characters to converse in are Italian and Neapolitan dialect and the entire cast learned it. I love when artists take one step forward to give their character justice. The aspect of commenting on the silence that exists in this neighborhood where men beat wives, wives beat children, people are thrown out of their window and much more is very raw and also essential to get the gist of the literature.

The sensitivity in exploring a friendship that can be ruined with time and the words misunderstood or unsaid was dealt with beautifully. I think Elena always stood in the shadows of Lila and the loneliness and confusion of “who am I” or “what is my place.” The show explores the entire ‘Where I can be nurtured?’ the question really well.

Most of the shots are captured at eye length, which is how both the girls communicate with each other. It sheds light on lack of education for girls defining them to be mothers and housewives. The heavily layered My Brilliant Friend is a series that talks about the complexities which have been followed down through generations and how some fragments of the society will never change.

Similar Read: The 26 Best Hotstar TV Shows That Are Worth Your Time

Creating a strong sense of place is really important and My Brilliant friend Season 1 does that with the accuracy of the Production design. It excels in recreating a certain era. The first few episodes place us in comfort where we don’t want to leave the grey walls, dusty nature of the place. However, when you see Elena go to Ischia we don’t want to come back.

Max Richter always delivers with the intensity of his sounds. In all his work I always feel a sense of safety as I stand alone diving into the depths of the world with a strong sense of vulnerability. It brings me joy listening to him. The last episode makes you wanting for more as it a partial goodbye. HBO has been bringing beautiful content which is why we always root for shows.

Watching season 2 of My Brilliant Friend (L’amica geniale) and taking this journey with these characters would be a fantastic thing to look forward to.

My Brilliant Friend (Season 1) Review – A story about controlled anger