House of the Dragon (Season 1), Episode 9: “Game of Thrones,” the predecessor of HBO’s “House of the Dragon,” always underlined each of its seasons with a ninth special episode. It could be a shocking twist of events (like your main character getting their head chopped off) or magnificently shot warfare (Battle of Bastards). Fans who anticipated any such thing might be slightly disappointed with this ninth episode titled “The Green Council.” There is no grandiose combat, and Princess Rhaenys not doing what the whole of the Internet wanted her to do means there is no mind-blowing twist either. However, it still is a fantastic episode with plenty of devious scheming and a fair bit of a satisfying ending. 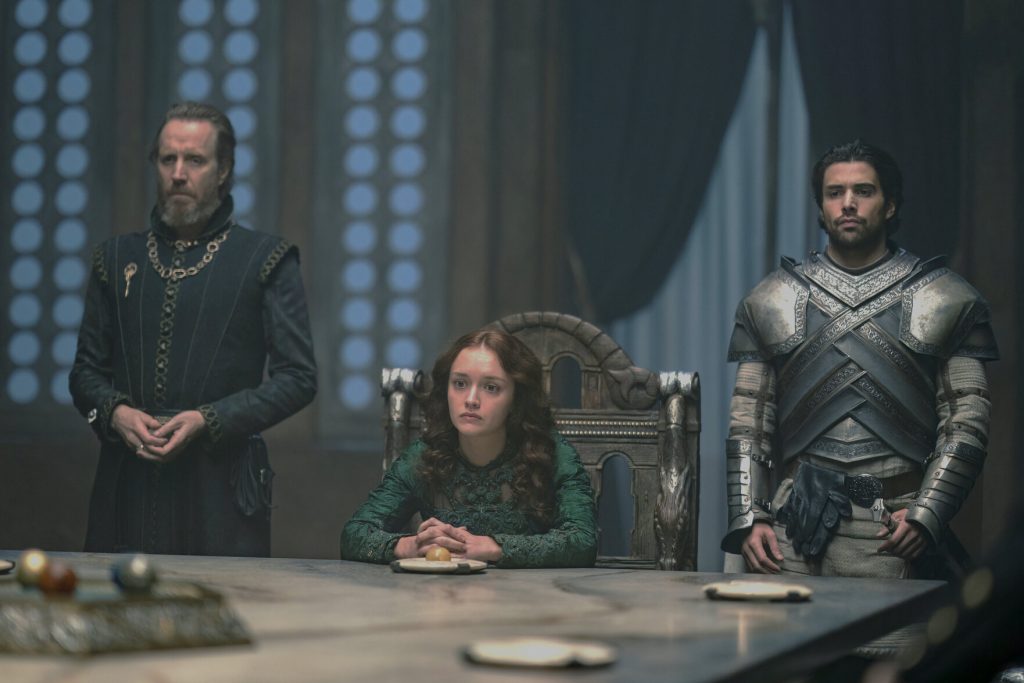 King Viserys (Paddy Considine) is dead. And as anticipated, Queen Alicent (Olivia Cooke) does mistake Viserys’ dying words as a nod to make her son Aegon (Tom Glynn-Carney) the King, usurping the legitimate claim of Princess Rhaenyra (Emma D’Arcy – not present in this episode). You get that when you have too many people going by the name ‘Aegon.’

Alicent tells Otto (Rhys Ifans), the hand of the King, about this mistaken change of heart from Viserys. She convinces herself that she is going to follow her late husband’s will by making her son the King. However, it quickly seems to her that she does not even require half of that effort to convince others about making Aegon King. Otto and other council members, barring Lord Beesbury, already have a succession plan to ensure Aegon’s ascension.

The Queen and The Hand get into a debate about whether to let Rhaenyra live, as Otto is of the opinion to eliminate the living challenger to the throne. This comes as a shock to Queen Alicent and to Lord Beesbury (Bill Paterson), who could not hide his dissent and gets his head smashed by Ser Criston Cole (Fabien Frankel). That is two heads Ser Criston smashed (Take that, ‘The Mountain’). And Alicent, for all her faults, cannot condone the cold-blooded murder of her childhood friend.

The Search for the King

The debate above results in a two-fold search for Prince Aegon, as he is missing. Otto sends two brothers, Ser Erryk and Ser Arryk (played by Luke and Elliott Tittensor), to house Cargyll, while the Queen sends Ser Criston and Prince Aemond (Ewan Mitchell). Both teams have to find Prince Aegon before the other. The goal is simple, whoever among Alicent and Otto gets Aegon, the new King can decide the fate of Rhaenyra and her family.

The search for Aegon takes both parties through the various underbellies of King’s Landing. Ser Arryk and Erryk find an illegal child fighting ring where some of Aegon’s bastards are being brought up. Aemond, on the other hand, rues the birth order that makes Aegon the king, not him. Ser Criston does express sympathy for him.

The search for Aegon ends when Otto manages to strike a deal with the kingdom’s new mistress of whisperers, Mysaria (Sonoya Mizuno), who goes by the name ‘The White Worm’ now. White Worm provides the location of Aegon, and Sers Erryk and Arryk are able to extract the drunken ‘King-to-be.’ However, they are soon interrupted by Ser Criston and Aemond, who bests the two brothers and take Aegon to the Queen.

During this search, Otto and Alicent have garnered support for their cause. Otto with force, Alicent with a necessary mix of power and pleas. Ser Harold, the Lord Commander of Kingsguard, was the first to not align with the schemes of Team Green, as the Queen’s party is often known. With various lords and ladies being threatened with their lives by Otto, it does not take much time to find the necessary support.

Meanwhile, the King’s palace goes into lockdown mode during the entire period, with no one being allowed to leave lest the news of King Viserys’ death and the subsequent coronation of Aegon reaches Rhaenyra. Princes Rhaenys (Eve Best), who, for some reason, was in King’s Landing, get house arrested. Alicent visits her and asks for her support for her son. Princess Rhaenys has stood by Rhaenyra so far. She does not seem to falter in her conviction.

Although not as explosive as most ninth episodes of ‘Game of Thrones’, ‘The Green Council’ still offers plenty of action. There is a cat-and-mouse chase, a small sword fight, and a reasonably satisfying hero move at the end. This episode has no Rhaenyra and Daemon (Matt Smith), so it allows Olivia Cooke and Rhys Ifans to carry on the superlative acting performance that we have seen from Paddy Considine in the last episodes. And they do.

The age problem in casting now starts to become more and more noticeable. It is a tad bit distracting that there have been three different-looking Laenor Velaryon without Fabien Frankel’s Ser Criston showing so much of one single grey hair. “House of the Dragon” already has quite a bellyful of characters with similar to same names; the recasting of most characters, while others remain absolutely unchanged, is an unnecessary, confusing move.

Where did Princess Rhaenys go? The Queen and Lord Larys share a strong bond. Although, the exact nature of their friendship was not explored. As Lord Larys Strong pleasures himself in front of the queen and at the sight of the Queen’s naked feet, it becomes clear how strong Alicent’s conviction for her son is to come to terms with that. Till this episode.

In exchange for that pleasure, Larys strongly offered the information of ‘White Worm.’ He highlights that it is the new mistress of whisperers who helps Otto stay one step ahead of Alicent. Alicent asks whether Larys would be able to tackle that, and Larys answers affirmatively. Mysaria’s lair seems to be put on fire by lord Larys’ men. Something of a signature of Lord Larys’ work.

The Ascension of Prince Aegon and Princess Rhaenys’ Escape

With his mother by his side, Prince Aegon takes the steps toward his coronation. His dismay quickly turns into glee as he sees the general public support for him, largely due to him being a male heir. As the new Lord Commander of Kingsguard, Criston Cole, puts the crown on Aegon’s head, something else stirs up beneath the place.

Princess Rhaenys has been rescued by one of the Cargyll brothers, and amidst the crowd uproars, she sneaks into the dragon pit below the coronation place. And she re-emerges, on dragonback, riding her dragon Meleys. The entire team Green of Alicent, her children, and Otto and Ser Criston, stand motionless in front of the massive beast. All it needed was the utterance of ‘Dracarys’ from Princess Rhaenys. But ‘The Queen That Never Was’ does not utter that, and she shows the ultimate power move by letting them live. And then she flies outside, presumably towards Dragonstone, where Rhaenyra is.

Where to watch House of the Dragon (Season 1)

Piggy (2022) Movie Ending, Explained - Does Sara save her bullies?