Glass Onion, writer-director Rian Johnson’s follow-up to 2019’s Knives Out, is a whodunit with enough intricacies and elaborate character work to rival not only that of its predecessor but also the classic murder mysteries whose tropes this newfound franchise is determined to upend. Even the title of the film takes its name from a Beatles song that was written for the purpose of confusing the listener, especially those who read too much into the lyrics of Lennon and McCartney. Suffice it to say that nothing is as it seems when Johnson is at the helm, especially since Glass Onion features entirely new characters — aside from series lead, Detective Benoit Blanc (Daniel Craig), of course — and an entirely new mystery set on the private island of wealthy tech pioneer Miles Bron (Edward Bron).

Of course, it’s not too long before a complex murder mystery game between Miles and his friends turns into a real case of murder most foul. But what exactly is their reasoning for being there in the first place? Who invited Blanc to join in on the extravagant weekend? And, most importantly, who is responsible for the death that unfolds over the course of one disastrous evening?

Spoilers for Glass Onion: A Knives Out Mystery ahead! 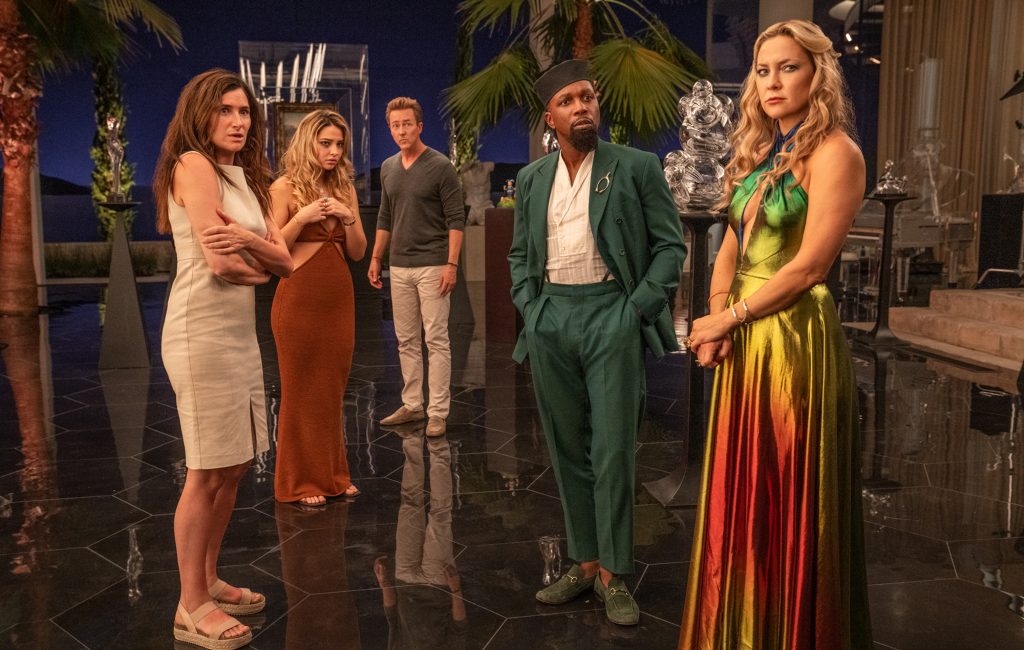 In May 2020, as the initial restrictions of the COVID-19 pandemic begin to lift, a group of friends reunites for a weekend holiday at the mansion of billionaire Miles Bron, the owner of a tech conglomerate Alpha Industries who resides on a private island in the Aegean Sea. Miles sends each of his friends, to whom he refers as “disruptors,” an elaborate puzzle box as part of their invitation, which they are collectively able to solve together. Among the exclusive guest list are Lionel Toussaint (Leslie Odom, Jr.), Alpha’s chief scientist and Miles’ right-hand man; Claire Dabella (Kathryn Hahn), the governor of Connecticut who’s running for a Senate seat; Birdie Jay (Kate Hudson), a model-turned-fashion entrepreneur who is joined by her devoted assistant, Peg (Jessica Henwick); and Duke Cody (Dave Bautista), a men’s rights influencer who still lives with his mother and has brought his much younger girlfriend, Whiskey (Madelyn Cline), with him.

There are a few surprise additions thrown into the mix. Cassandra “Andi” Brand (Janelle Monáe), Miles’ former business partner and co-founder of Alpha, has also received an invitation, but her arrival on the island is a surprise to the group, especially considering that Miles had recently ousted her from her role as Alpha’s CEO and left her with nothing. Also joining in on the gathering is Detective Benoit Blanc, who informs the group that he also received an invitation and managed to crack open the puzzle box himself. After the group arrives on the island and is welcomed to Miles’ mansion, the Glass Onion, Blanc is informed by Miles in a private meeting that he did not send Blanc an invitation. Both men are perplexed as to who would have invited Blanc to the island, but Miles allows Blanc to stay for the group’s murder mystery party, remarking that having a real detective at the party will give the game a more authentic feel. Blanc suggests that his invitation may suggest that Miles is being targeted for murder, but he is rebuffed, with Miles assuming that one of his friends invited Blanc as a hoax.

What is Everyone’s Connection to Miles Bron?

Blanc tours Miles’ estate, which features a number of guest houses, gardens, an extravagant Porsche on the rooftop, glass artwork, and even the Mona Lisa, which Miles explains is on loan from the Louvre since the museum has been closed due to the pandemic. Miles also explains to Blanc his latest invention: Klear, a new hydrogen-based form of alternative power that is currently powering the Glass Onion as Lionel continues to perform tests on its stability.

As he gathers with everyone around Miles’ pool, Blanc begins to learn more about the group’s dynamic and their relationship with the host, which brings some of their interpersonal tensions to light. Lionel has grown frustrated with Miles’ repeated attempts to make Klear available to the public, despite his tests suggesting that it has potential nuclear capabilities. Claire’s entire political campaign has been secretly bankrolled by the profits from Alpha, as has Birdie’s successful line of sweatpants. Birdie is fearful of Miles, as he has been pressuring her to take the fall for a recent scandal involving an illegal sweatshop in Bangladesh that produces her sweatpants, which would ruin her already fragile credibility along with that of Peg, as well. Blanc also discovers that Duke is resentful of Miles due to the affair he has been having with Whiskey. As the group convenes, Andi is given the cold shoulder by everyone except Blanc, causing her to lash out at them for allowing Miles to control them to the extent that he has.

Later that evening, as the group gathers for dinner, Miles begins to explain the layout of his murder mystery game, in which the group will have to work together to figure out who “killed” him. Though Miles explains that the game is so complicated that it might take them the entire weekend to complete, Blanc solves the case almost immediately, much to the group’s shock and Miles’ immense chagrin. With no game left to play, the group resorts to drinking to pass the time. Andi’s contempt for the group comes to a head when everyone begins to question why they were unable to contact her following her ousting from Alpha, leading to an argument between Duke and Andi that ends when Andi leaves the room.

Shortly thereafter, Duke begins to convulse before collapsing to the floor and dying. Blanc deduces that his drink must have been poisoned, causing the group to panic and pin the death on Andi after discovering that Duke’s pistol, which he always carried with him, has gone missing. Miles then begins to fear for his life after discovering that the glass Duke drank from was actually his own, causing him to cower behind Blanc, paranoid that one of the others meant to kill him instead. As the paranoia continues to rise, the electricity in the Glass Onion powers down as part of the proceedings Miles had originally planned, causing all the mansion’s lights to go out. As the group splits up to look for Andi, Blanc finds her outside on the front steps and informs her of Duke’s death. Before he can explain anything further, however, she is shot through a darkened window by an unknown individual. As Blanc mourns her apparent death, the others arrive on the scene.

What Has Blanc Been Hiding From the Group?

Flashbacks reveal that Blanc had previously been hired by Andi’s twin sister, Helen (also Monáe), to investigate her death, her body having been found a week prior in a presumed suicide. It is here that Blanc learns of Andi’s ousting from Alpha, which occurred after she rejected Miles’ proposal to market Klear to the public. More flashbacks reveal that Andi introduced Miles to her friend group around the same time that she came up with the founding ideas for Alpha, writing them down on a cocktail napkin while the group was hanging out at a bar, also called Glass Onion. After Alpha birthed a technology empire for Miles and Andi, their money was used to finance each of the disruptors’ endeavors. At the trial following her firing, each of the disruptors commits perjury, testifying against Andi and claiming that Miles came up with the idea for Alpha, fearful that to not do so would mean ruin for themselves.

Helen suggests to Blanc that one of the disruptors must have killed Andi after she found the cocktail napkin with her ideas written on it and used it to blackmail them in an effort to ruin Miles. In order to properly investigate Andi’s death, Blanc suggests to Helen that she pose as her sister and allow him to accompany her to Miles’ island for the murder mystery party. Since she received an invitation to Miles’ party prior to her death, Blanc arranges for Andi’s death to be hidden from the public.

On the island, Blanc ingratiates himself to the group at Miles’ pool while Helen sneaks off to look for evidence against the others. Spying on their conversations, she learns that Birdie, Claire, Duke, and Lionel all had a reasonable motive to want Andi dead, given their respective ties to Miles’ affairs. Lionel and Claire had staked their professional lives to support Miles and the public unveiling of Klear, unaware that the product would be so dangerous. Birdie was coerced into accepting responsibility for the sweatshop scandal while Duke was attempting to get a position in the recently established Alpha News by having Whiskey sleep with Miles.

Later that night, after arguing with Duke, Helen leaves the group to search for Andi’s napkin, which she believes must be in one of their possessions. In her ensuing search, she runs into Miles’ slacker housemate, Derol (Noah Segan), and Whiskey, who confronts her out of suspicion that she killed Duke. When the lights in the house go out, Helen escapes the house to evade Whiskey and runs into Blanc. It is here that she is shot, but she survives since Andi’s journal had been in her jacket pocket and blocked the bullet. Blanc helps her stage her own death as he hurries the group back inside the mansion. With Miles and the other disruptors gathered in the Glass Onion’s art gallery, Blanc concludes that Andi’s killer, and Helen’s attempted killer, were actually Miles. After learning from Lionel that Andi had found the cocktail napkin, Miles went to Andi’s house and killed her himself, hurrying to leave since everyone else was planning to confront Andi for ignoring them following the trial. While driving away from the house in his Porsche, Miles was spotted by Duke, who recognized the car and almost crashed into it on his motorcycle. When Duke learned of Andi’s death via a Google alert during the party, he informed Miles and attempted to blackmail him. In response, Miles filled his own glass with pineapple juice, which Duke was severely allergic to, and handed it to Duke, killing him. Having framed himself, Miles stole Duke’s pistol in the ensuing chaos and used it to shoot Helen.

Helen locates the napkin in Miles’ office and reveals her identity to the group, but Miles burns the napkin in front of everyone. With no way to discredit Miles, and with no one willing to speak out against him, Blanc leaves the mansion as Helen begins to smash the glass artwork in the gallery, before setting fire to the room, causing the mansion’s Klear supply to ignite and destroy the entire house. The explosion incinerates the Mona Lisa, which is left unprotected after Helen bypasses the painting’s protective glass case, which Miles had previously shown to the group. Helen informs Miles that she has fulfilled his previously expressed desire to do something that would get him mentioned: “in the same breath as the Mona Lisa.” With Miles’ reputation ruined due to the painting’s destruction and the evidence suggesting Klear’s destructive capabilities, the others agree to support Helen and testify against Miles. As the disruptors watch on as the house erupts in flames, Helen joins Blanc on the beach as they watch the police arrive on the island.

Everything Related to Glass Onion: A Knives Out Mystery:

Glass Onion (2022) Review: A Blunter Instrument Than Knives Out, For Better or Worse

Here’s Where To Watch And Stream Daniel Craig’s ‘glass Onion: A Knives Out Mystery’ Online

Exceptional Features of an Online Casino