Films about coming-of-age are instantly appealing to me. This is a phase of life that is drenched in receptive timelessness. We come of age whenever we are struck by a realization. An individual must learn to cope with grief, love, longing, and the fact that one must learn to nurse their wounds. But the face of dire poverty doesn’t allow such profound philosophical erudition to invade a conscience. Aya, her mother, and the people around her life at the moment. And the moment on the island of Lahou signifies dread and urgency.

Aya grows up with her mother on the island. Joyous and cheerful, she loves to pick coconuts and nap on the sand. However, her utopia is doomed to sink under the waters. As the waves advance to her house, Aya makes a choice: the sea can rise, but she will not leave her island. With such a simple, sobering premise, Simon Coulibaly Gillard constructs a layered and thrilling portrait of an environmental crisis being the ultimate villain in the face of humanity.

The director shows great skill and maturity in what is his debut film. He is fascinated by the way of life along these African coasts. He is concerned primarily with the dominant role of nature and the difficult adult life of the people. The simple pleasures of Aya are warm and intimate but they are equally abrasive. Her friendly conversations with her mother are knit incredibly well. The character study enjoys a sensitive female gaze for the women in the frame, which is uncommon with female-led films directed by men. The disastrous climate change and the rising sea levels are never used as obstructions to the fluidity of the narrative. 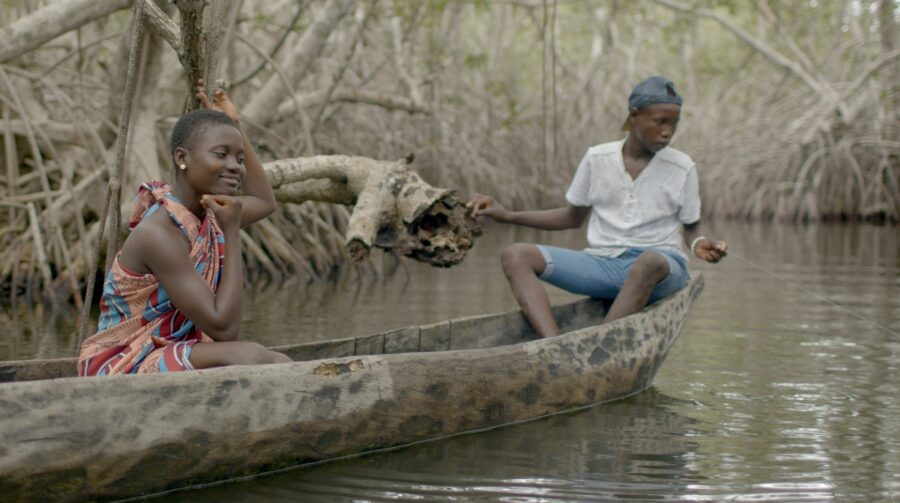 Gillard stages simple scenes with clever dialogues and powerful messaging, which helps in resisting any form of a gimmick as far as the writing is concerned. The documentary-style filmmaking is embodied and embraced by Aya. The conversations and overall acting are too real to be even listed as fictional. There’s an excessive amount of captivating visual poetry. The soaring waves of the sea, the swamps with interconnected trees, the fish being fried, every aspect tries to convey a little something about Aya.

As a character, Aya is personal to someone like me. In a powerful scene, the girl declares that she will always remain on her island, be herself, and live life like her mother. This is inspiring because it makes us understand how self-created shells can be beautiful if you learn to accept yourself. This, admittedly, is my biggest takeaway from the film. Her sensual elegance takes a murkier turn towards the end, but Aya remains refreshingly honest about revealing her feelings. Again, every speck of her nature has clarity and authenticity, so it doesn’t feel mainstream or loosened. The elegiac cultural representation only heightens the impact.

There’s a mythical beauty that the film boasts of. The crematoriums, boats, and fruits have been used allegorically to depict the relationship between a man and the biosphere from which he emerged and will be laid to rest. The connection with one’s soil and roots is something which, when forgotten, becomes a curse in the building of a personality. Aya is also a terrific snapshot of what it takes to live as a woman with a resolve in a world filled with objectifying and reckless men. What it takes to be a teenager in a room full of adult complexities.

However, Aya is such a gentle coming-of-age drama. It knows the grammar of being underprivileged and being a woman. For someone like me who is so deeply connected to his origins, the film tremendously resonates. Charming, lush, and youthful, it’s an essential entry to the parallel selection of nine ACID films in the festival.