Anyway, we soon realize that the tense sequence we just witnessed was, in fact, part of a fake-kidnapping scenario; an elaborate birthday prank that William has planned for his brother. So, in a classic non-linear format, we are introduced to both the Chang brothers along with their secretary Melissa (Grace Serrano), the 4 kidnappers, and their respective social statures.

The Chang brothers are heirs of an entire Empire that includes Chang Import. But, to establish them being extremely wealthy, director McTigue somehow feels that a Crypto fortune would make this all the more believable (or probably distinctive?). The kidnappers on the other hand include; Chad (director Seth McTigue himself) – a war veteran haunted by the demons in his head, and his impulsive small brother Todd (Brennan Keel Cook) – with a fairly similar set of dynamics as the Changs.

The other two in the kidnapper’s group are Chad’s mute, wartime colleague Justin (Antonio Aaron) and an ex-basketball pro prospect Shannon (Shomari Love) – who is too broke to even buy some eggs. Also, something’s shady about Melissa too – she keeps looking at the photo of her estranged son and seemingly takes the prank with a pinch of serious-face salt. 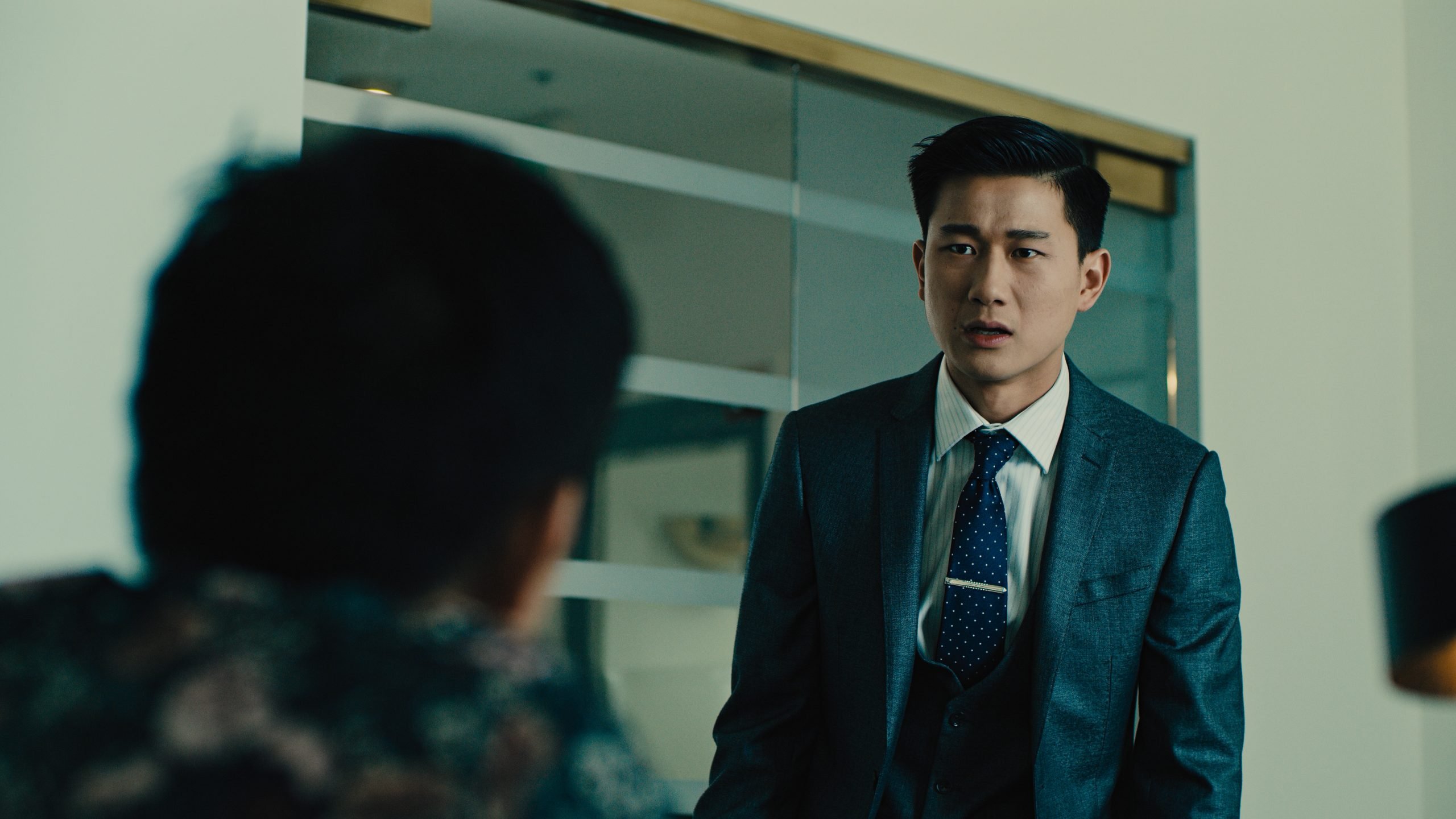 Director McTigue invests a good half an hour in setting up his characters – which, in my opinion, don’t feel like well-rounded personalities with internal conflicts, in spite of all the groundwork he lays down. Then, when we arrive at the moment of the kidnapping, which soon turns into a sort of heist when the fake kidnappers take their job a little too seriously and flee with Chang’s fortune – nothing really matters anyway.

Sadly, in spite of the twists and turns that McTigue introduces, “Take the Night” remains an exhausting exercise. Neither does the thriller aspect really thrill, nor does the dysfunctionality leave you moved. To top that off, the script and character motivations also feel extremely tired and unoriginal, leaving the viewer feel like they just spent time with a bunch of people that they barely care about.

Talking about the acting, McTigue himself at the center of all of this feels like a rotten egg. He has a singular, constipated expression on his face, which makes it very difficult to take him seriously. The others, including the Chang brothers, are extremely serviceable to the plot and the entire progression of the film itself.

The only high point in the film is cinematographer Rainer Lipski’s lensing and Julian Brown’s production design. The two of them are at least able to conjure a fairly good-looking noirish atmosphere that makes the production value feel more enhanced than they actually are. However, Jonas Wikstrand’s score is really off-putting and it manages to pull you out of key moments that would have used more silence than anything else.

Overall, Take the Night feels as unoriginal as its title itself. It never manages to use the palpable familiar trouble at the center of the narrative to any effective use, leaving the entire production feel like an incomplete debacle.

Read More: By Night’s End [2022] Review – A timid and often silly home-invasion movie bodged down by lack of tension

Where to watch Take the Night