Five Days at Memorial Episodes 1, 2, 3 – Recap & Ending Explained: It’s a new Apple TV+ series that narrates the devastating impact of Hurricane Katrina and its aftermath on a local hospital. The focus of this series is to highlight the systemic failure at controlling it while taking the viewers through a journey of exhausted caregivers. Battling the natural calamity is not an easy task in itself. And when the ones in control do not show any semblance of empathy or sanity through their behavior, what comes out is the catastrophe that we witness through the series. Here’s what happens in the first 3 episodes of this new series –

The first episode starts with real-life footage of the flooding in New Orleans, and people walking through the muddy waters. A news announcement is played along which tells that the hurricane has moved to category 5. The footage is followed by people in hazmat suits entering a place that is broken down beyond recognition. Cut to and we come to Dr. Baltz (Robert Pine) being questioned by a committee about this natural calamity and its aftermath. He is being interrogated about 45 dead bodies on the ground, but he becomes speechless after further questioning.

The further episode follows Day 1 (August 29, 2005) of Hurricane Katrina, and the way staff at the local Memorial hospital tackled the troubles that came along with it. Dr. Anna Pou (Vera Farmiga) walks into the hospital with the hope to assist with the ongoing crisis. When she enters the nurse’s room, she is being made fun of for not understanding what to bring in a situation like a hurricane. She explains her being unprepared by revealing that it is the first hurricane she is tackling. Later, the incident commander for the hospital, Susan Mulderick (Cherry Jones) informs the hospital staff & other people of the rules for the time being. Anna and Susan, both seem hopeful that the crisis will blow over soon after.

We see Diane Robichaux (Julie Ann Emery) speaking with a colleague about the patients who need more assistance and then going to see one of her patients. By the kind of conversation they have, it seems like she has a friendly relationship with her patients. Meanwhile, Dr. Pou is seen speaking with her husband who mentions how he wishes to be there with her instead of being home, taking care of their family. Outside, we meet Mark (JD Evermore) driving, who is told to take a different route while returning to his home. Once he reaches there, he learns the news about the hurricane and the warnings being shared. He gets worried since his mother is not with them and is admitted to the Memorial hospital. He calls her nurse Jill who informs him that they are taking good care of her. Midway in this conversation, the phone signal drops, leaving their conversation incomplete.

By then, the flooding starts impacting the hospital ceiling. Diane calls Susan to inform her about the leakage who then asks a staff member (Eric, played by Joel Keller) about it. He mentions something that makes it seem nothing serious or alarming. When she asks for the remedy, he asks her back since she is the incident commander. At this moment we realize how unprepared she is to deal with this terrifying situation. She then starts going through a huge book that mentions the evacuation plans for many possible reasons but not a hurricane. It puts her in a tough spot since there is no protocol for her to follow and she has to make decisions on the fly. Meanwhile, the effects of this incident start to rapidly worsen. Suddenly, an object hits the window of Susan’s office leaving the glass shattered. Even at the hospital, the bridge connecting the two wards starts getting shaky. With one incident like this following another, Dr. Pou calls Susan telling her that they must evacuate. Susan then decides to recover food from the basement while everyone on the staff tries their best to comfort and take the patients to a safer place.

The second episode starts with news coverage of the incident and flooding caused throughout the city. It is followed by a brief scene where Susan is being questioned about the incident. She mentions how all of them were not ready for what was coming right after the hurricane. Cut to and we see Susan congratulating the hospital staff on their bravery during the hurricane. She reminds everyone to keep hydrated since the AC is out. When someone mentions the water outside, Eric says that the water is at 18 inches mark and the level will keep receding after that. Later, the hospital director suggests discharging some people, to let go of some burden. Susan does not proceed with this proposal since these people would have nowhere to go in the city that is already flooded.

Meanwhile, a rumor goes around in the hospital mentioning how some of the patients will be discharged. Horace talks to a frightened patient and assures him that no one will be discharged anywhere and tells him to speak with him directly in case of any need. Besides, some rumors claim a nurse was raped by some goons outside their hospital. Meanwhile, a few young boys break into shops and steal food and other necessities. When Dr. Bryant King (Cornelius Smith Jr.) speaks with them about the theft, the boys justify this by telling how they were put out by the hospital. These incidents further explain the impact of the rumor and how the calamity makes people go to any lengths or be opportunistic.

At a distant place, we come across a conversation where a businessman asks with his capitalistic tendencies whether a natural calamity would benefit his business or impact it badly. Michael Arvin (Joe Carroll), who works for him, answers with stoic professionalism but feels a tinge of guilt by this conversation. At the hospital, an incident comes to Horace’s notice about an elderly woman who has been stabbed. He speaks with a stunned young man who was there with her as her grandson. From him, Horace gets to know that she was murdered by his mother. The scene shows how such ungodly circumstances can bring out the worst in people. While that happens, Mark decides to bring his mother back home from the hospital and plans to head there with his wife.

Meanwhile, Dr. Pou’s husband comes to visit her at the hospital, and they share a night. On the other hand, rescue soldiers visit their hospital and inform them about the level the flood has reached and the urgent need for them to evacuate. Eric chips in to tell that the water level is not receding as he had predicted earlier. Susan mentions how the hospital does not have any plan to evacuate during a hurricane, but the soldiers insist on doing so for their safety. While Dr. Brian disagrees with Susan’s approach, which seems due to his inability to follow her authority, he goes along with it. 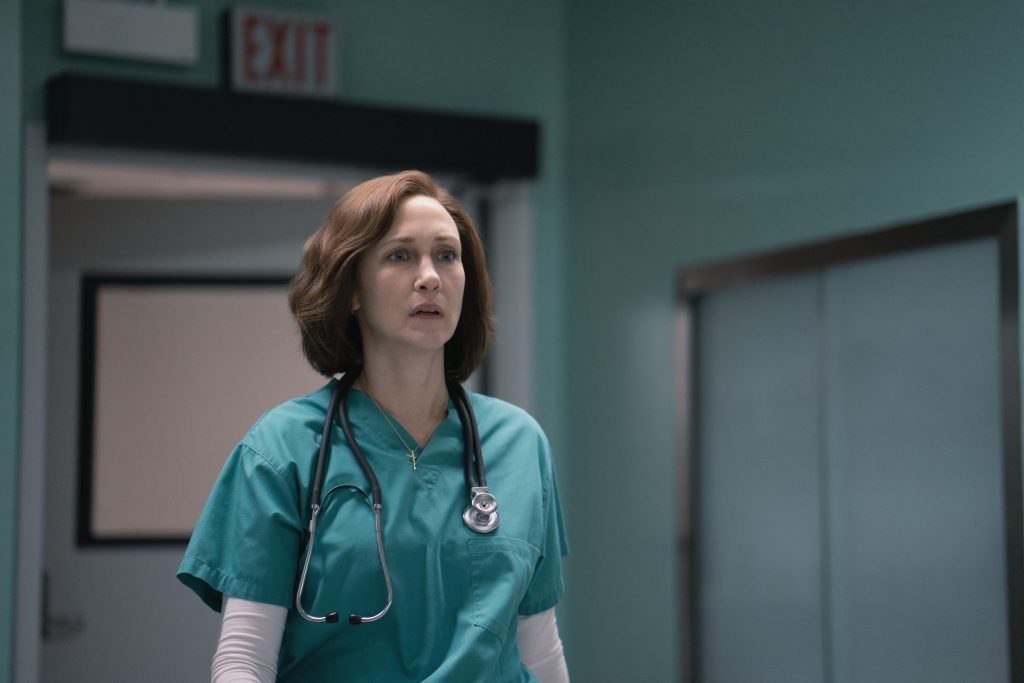 The third episode starts with a Dr. Bryant speaking about the incident during an interview with the police. He is being asked whether he understood the intensity of the calamity and he mentions that nobody had guessed that it would be that devastating. When asked about Dr. Pou, he mentions how circumstances reveal your true nature. The scene states how there’s more to know about Anna than a medical professional unaware of the gravity of this situation. Cut to and we come back to day 3 of the incident, where Susan is sharing important information with her staff. She says that they need to evacuate right away and looking at the situation at the moment, they have 4 hours at best to make it possible.

Diane, who gets to know about the evacuation, confronts Susan and asks how the evacuation is possible since hers is a private hospital, where many patients require constant medical attention. Michael Arvin, whom we see in the previous episode, gets an email from the Memorial hospital asking for help with the evacuation. He contacts a National Guard acquaintance, but after an unsuccessful attempt, he tries his best to help the hospital directly by himself. Meanwhile, a few from Memorial’s staff go up to the helipad to check on its present condition. That’s when a National Guard helicopter lands and the guard tells them there’s room for just a single patient. The staff rushes back to the hospital and brings back one of the infant babies (neonates) as per orders by Susan.

The truck from the National Guard had room for only 35 people and Susan thinks it better to send patients who are on life support. The three higher-up doctors try to decide among themselves whom to evacuate the next. The discussion gets heated since one of them thinks that DNR patients should be the last group to save – since they have pretty much signed the bond to not be saved (Do Not Revive). But the others object and find this treatment inhumane, especially in the current scenario. The discussion shows the deciding committee figuring out the priorities based on the will to live.

Later, when the truck comes from the military, just 20 people could get on it. While one of her colleagues tells her to leave with them, Dr. Pou decides to stay back. While the truck could at least take that many patients, when the nurses bring more newborn babies to the helipad, they do not see any helicopters – leaving those patients stranded. We get to know about it due to Michael who is informed that the Coast Guard will send the helicopters instead of the National Guard. Meanwhile, the level of water continues to rise throughout New Orleans leaving the trucks not able to reach the hospital.

While that is the situation outside the hospital, the internal pumps also start bursting and flooding the interiors. Meanwhile, the power gets cut since the water comes from outside into the basement. The whole hospital goes dark and still doctors stay resilient through these worrisome situations. Not long after code blue is declared since a patient goes into cardiac arrest. Dr. Pou, Dr. Horace, and other staff members try their best to revive the patient, but the man dies due to unavailable resources. In the end, we come back again to Brian’s interview, where he says that he couldn’t stop it. From being able to save lives, they went to realizing their inability to help in this entire situation. The episode ends on such a gut-wrenching note that conveys the plight of medical professionals in this horrifying calamity.

Where to watch Five Days at Memorial