Mixing a superhero film with an ’80s adolescent adventure story is a surprisingly novel idea given how many iterations the former has already undergone. And this novelty is paramount to experiencing ‘Secret Headquarters’, a film structured in such a tried-and-tested fashion that to find anything else that would come close to being interesting or surprising is a fool’s errand. But it’s not that this is a complete bummer as a film. In fact, much of its entertainment comes from a script that has some fairly funny and heartfelt moments. The child who feels abandoned by his father and doesn’t realize that he’s unwittingly his biggest fan is a ripe territory, even if a tad trite, to explore the distress of having an absentee father.

One of the film’s strongest decisions is the casting of Owen Wilson as an everyman suddenly deemed worthy of wielding an alien superpower and using it to save the world. Nothing about him betrays his alter-ego as The Guard in the slightest because everything about him screams ‘regular Dad’ material, so much so that Maya even calls the eponymous location a ‘secret man cave’.

In fact, by showing him to be a divorced dad on account of how busy his job as The Guard keeps him, the film tackles another idea that has always fascinated superhero enthusiasts – ‘Does being a superhero affect the everyday life of the person?’, without resorting to Spider-Man clichés about him taking care of goons and managing to make it just in time for a family dinner. Javier Pena as the comical antagonist, Ansel Argon, a weapons mogul whose business is under threat owing to The Guard’s comprehensive protection of the world too works as nothing about him can be taken remotely seriously, either as evil or as someone extraordinarily rich and powerful.

But that’s pretty much all there is to ‘Secret Headquarters’ that works in its favor as otherwise, it’s a really poorly executed work. It’s supposed to be a comedy and yet its editing is so below par that every moment, funny or not, except the ending few minutes, feels excessively rushed. It’s not that it’s trying to portray something grand and expansive yet the manner in which the film dashes from moment to moment makes it seem like a much longer film that’s been chopped down to a marketable length. On the flip side, the duration of it is indeed in its favor so if there is some clandestine cut of it that’s twice the length, it needn’t see the light of day.

The kids aren’t particularly interesting to watch and are likable in the same manner that all precocious adolescent characters that have been given witty remarks to deliver are. Charlie’s mother is a particular missed opportunity as for one, given the warmth she exudes, she could easily have been a major character and a particular revelation nullifies the decision to give her such a marginal role. There are moments when the CGI work comes across as looking like it’s from the early 2000s and it’s not like these are few and far between while the superhero suits being blatant rip-offs of the Iron Man suits is just a lazy choice. The villain who kills his own henchmen is another unnecessary trait that is used to reduce the number of characters heading into the finale and just seems silly in a misguided manner.

It’s not like ‘Secret Headquarters’ is attempting to deconstruct the superhero formula in some radical fashion. It’s supposed to be a standalone (hopefully) ‘fun-for-the-whole-family’ spin on the genre which has become increasingly convoluted and serious in recent years. But like most such mediocre Hollywood films, it treats its audience too patronizingly as even its 10-15 year old demographic doesn’t need the spoon-feeding the plot is so readily willing to offer. 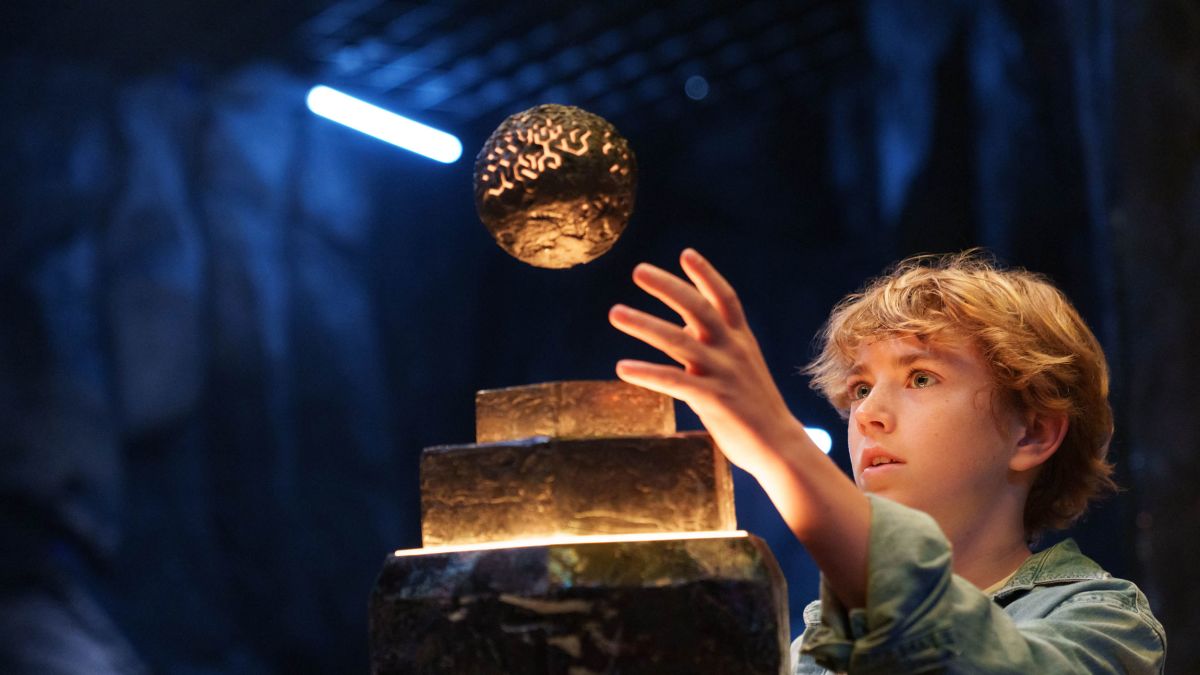 What kind of visions does The Source produce?

For those with good intentions, the orb, known as ‘The Source’ in the film, can conjure up visions. When Charlie first takes The Source in his hands, he’s shown a world torn apart by war, famine, and other destructive events, as a way of showing him what the absence of someone like The Guard would do. This also helps him understand why his father had to prioritize saving the world over spending time with him.

When Irons gets a grip on the power source, it shows him similar events before telling him that Jack/The Guard isn’t his real enemy but a friend while it’s really Argon who is his enemy. This is because Irons viewed The Source as an extraterrestrial blessing that is to be harnessed and used by all of humanity and not be of benefit to just one man. There’s also some grudge left over from their initial encounter with the UAP that brought The Source with it since, at the time, it didn’t choose Irons as its guardian. Realizing that Argon wishes to exploit The Source’s power leads to his change of heart towards Jack and the kids.

Why did The Source not choose Irons?

There’s no specific reason that’s given for The Source not choosing Irons. At the time of the UAP’s crash, there’s a megalomaniacal nature to him, an obsession with this new power source that makes him come across as evil. The fact that he joins hands with a weapons manufacturer in his anger, someone who clearly wants to use The Source for his own benefit, shows that Irons is a highly credulous person and hence, not the right choice for being given such a massive responsibility. Eventually, The Source guides him in taking the right path once it recognizes that he has good intentions but has been exploited and is on the verge of facilitating its undoing owing to his employer.

The explosion of a bomb on The Source opens a portal to another dimension that sucks Argon into it and leaves him there. In the aftermath, Charlie joins forces with Jack as they become the duo who go out to save the world, now in a new, more advanced G-Mobile that doesn’t have a ‘single-dad, short-term rental feel’. Given that it was Charlie’s mother who designed the fanny packs housing The Guard’s suit, she too probably continues her role in designing equipment for the two of them as they all get back together as a family.

Irons’s change of heart makes him join The Guard’s side as the quartermaster for the two of them. Before the closing credits, we are informed about the fate of all the other kids like Berger becoming a DJ and vegan while Maya supposedly is interning for the CIA.

In a post-credits scene, Argon still stuck in the other dimension he was trapped in, breaks the fourth wall to beg the audience to help him get out of it.

Where to watch Secret Headquarters