The first thing that I noticed about The Lighthouse (2019) was that just half the screen was being used. All the action was unfolding before us in a tiny box, unlike anything we have seen in films of the recent past. It was common in the early films which are exactly around where this film set in. The language too is a tad weird to listen to unless you are an Elizabethan literature aficionado.

The language didn’t just die out but it evolved. The older generation did try hard to preserve the language they knew well. When Ephraim Winslow says, “Yes Sir” he gets reprimanded for it and is made to say “Aye, sir.” This is relatable now as well, with slang making its way in and some words becoming outdated with people attempting to preserve it.

Lighthouse keepers being stranded for a particular period before being relieved is outdated and even if it isn’t they would have larger accommodations than the cramped ones inhabited by Ephraim Winslow and Thomas Wake.

Everything in The Lighthouse feels crammed. The narrow frame helps give the audience a closer focus at the cramped up space of the characters and their isolation. It seems as though the fourth wall is a small window through which we witness director Robert Eggers’ claustrophobic story play out. Eggers co-write this film along with his brother Max Eggers which chronicles the four-week stay of two Lighthouse keepers “wickies” on a remote New England Island.

These two are supposedly partners but once on the island one pulls rank and the other is delegated all the menial tasks such as digging, shoveling coal, cleaning, whitewashing the Lighthouse and everything apart from climb to the top of the Lighthouse.

Willem Dafoe plays the prophetic senior and rugged-looking Thomas Wake. He matches what literature has constantly defined as the rugged seaman. The old ‘wickie’ is bearded, talks with an initially incoherent growl. The only time I was able to decipher what he says was when he goes on his great monologues. He has two of them which make you stand and applaud.

Thomas has a habit of coming up with Shakespeare like lines at toasts and makes comebacks in the form of compliments. The parrot upon his shoulder is missing. Else he could pass as a pirate from Robert Louis Stevenson’s Treasure Island. Yes, he limps albeit sans a wooden leg and what’s missing? Oh ya, he has a pipe too which he lights using a piece of charcoal held in the poker.

Robert Pattinson plays Ephraim Winslow (the other ‘wickie’ who is on his maiden trip.) He looks a lot like Daniel Day-Lewis from ‘There will be Blood.’ Winslow is one who is averse to drinking and doesn’t believe in old sea myths about not harming a gull and to put it mildly he harms a gull. His role has him put in the kind of effort that could see him bulk up for his turn as the caped crusader.

Winslow is driven by a mad desire to ascend to the top of the lighthouse and see the flame and the place he isn’t permitted to be in. Pattinson’s turn as Winslow is stunning as we witness his transformation from honest and straightforward to downright creepy and violent.

The only other human actors that appear on screen are the other ‘wickies’ whom Thomas and Ephraim have relieved, the mermaid and one other guy who has a blink and you miss it flashback appearances. Is he important? Two actor films don’t generally include someone unless they are key to the story.

When the two ‘wickies’ are sailed to the island there is a hint of sea mist and the mournful horn like-sounding music by Mark Kovren is unnerving and plays on your knowledge that this film is a horror film. The waves battering the rock upon which the films titular and isolated lighthouse is kind of a visual representation of how insanity, loneliness and the way one’s mind batters isolated men which causes them to descend into madness.

This descent is horrifying and the camera’s focus on the characters illuminated just by the candlelight manages to catch their perspiration drenched faces as well as all the minute details. The narrow frame helps emphasize that focus. We get a throwback to another psychological horror film in ‘The Shining’ as we see one character run after the other with an axe. 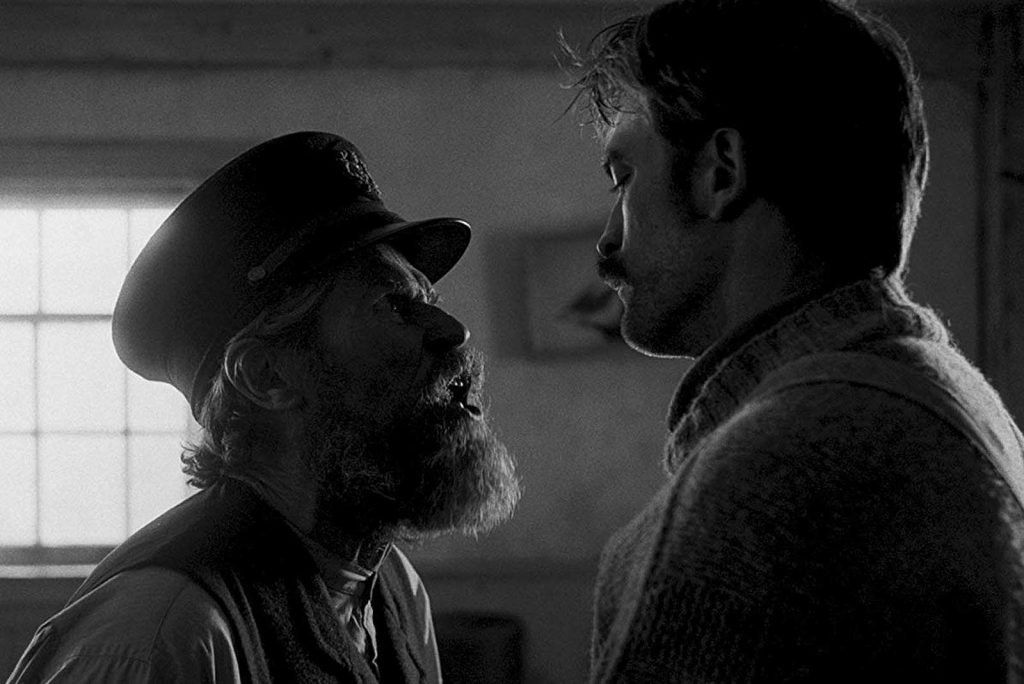 Like all horror movies, this one too has the creaking floorboards (this comes naturally for wooden flooring in a building upon a rock in the sea is bound to be rotten) which mercifully isn’t overused. The jump scare is there too and it works for after minutes and minutes of the build when we decide that it’s all uphill for one character, the other one rises and attacks.

Whenever I’ve watched a black and white film I’ve always wondered why it isn’t called grey. The film, in particular, is neither black nor white, but it remains grey throughout.

‘The Lighthouse’ is an attack on the sense and with it being branded as a psychological horror thriller one can step into the cinema expecting to be lost in thought. We aren’t disappointed as it makes our cognitive processes enter overtime whilst we try to decipher what is going on. At one point we even began questioning whether our narrator was reliable for there were too many holes in his story.

The question we ask ourselves way after the film ends is was it horror, ala the birds, is this simply a serial killer story or is this a story of insanity bordering on Lovecraftian horror, or is it just isolation and frustration drawing the human’s mind to insanity.

Even if you zero in on one particular answer you will be compelled by another narrative. And would only be sure of one thing. This film is creepy and unnerving. It can lure you back for repeat watches as you wish to segregate the endless gray into black and white.

The Irishman (2019): MAMI Review - Scorsese's Return to the Crime Genre is an Epic Cinematic Experience