When Bong Joon-ho innovatively staged the central conceit of the French graphic novel Le Transperceneige in Snowpiercer (2013), it was obvious that the series of train compartments is a reflection of the socioeconomic inequality prevalent in our contemporary society. With the dazzle of an action/adventure, the unabashedly unsubtle yet amusingly relevant parable of late-stage capitalism zeroed-in on the simmering tensions in a classist society. But don’t we discern the good-old class struggle vertically rather than horizontally as illustrated by Bong Joon-ho? If you are so fixated on the conventional image of class-ridden society –  the upper and lower – then you can behold ‘The Vertical Self-Management Centre’ in Galder Gaztelu-Urrutia’s The Platform (‘El Hoyo’, 2020), a vertigo-inducing prison that doubles up as a somber social experiment.

Similar to the dystopian nightmare in Snowpiercer, The Platform has an intriguing central conceit and its neatly divided structure withholds deliciously unhinged violent delights. Written by David Desola, the film opens with a man named Goreng (Ivan Massague) waking up in a concrete cell. At the center of the room is a rectangular hole, an open elevator shaft which seems to go on forever, both up and down. The number stenciled on the wall is 48 and an older inmate sharing the cell says it’s a good number. When a siren sounds, a floating platform-cum-meal table stops for a few minutes at each level before leaving for the next level.

Related to The Platform (El Hoyo): A Monster with a Thousand Heads [2015] – A Taut Supremely Crafted Social Thriller

The opulent feast that’s sent down from level zero turns decadent and becomes empty by the stage it reaches the bottom (it looks impossible to adjudge how many levels are there exactly). The most captivating aspect of this set-up is that the inmates now enjoying the banquet passing through the top-most levels can be shuffled to (randomly assigned) lowest levels when each month comes to an end. But still, the lucky inmates gorge on what they can before passing off the left-overs. There are other unique rules in the prison system and discovering each one of them bestows a grim fascination over this vicious socio-political structure; something not as far removed as our own dog-eat-dog world.

Goreng’s elderly cellmate, Trimagasi (Zorion Eguileor in an outstanding performance) is doing time for murder. So ‘obviously’ he’s been there for some time, and he smartly reveals as well as conceals certain details regarding the brutalist architecture. The obvious question here is: what would people in the lowest levels do when there’s no food? Well, some become what they seek. An atmosphere of pure hysteria settles down when the Don Quixote-reading Goreng and his incomprehensible cellmate is assigned to a lower level. There’s nothing in the narrative in terms of character exploration, but director Gaztelu-Urrutia and cinematographer Jon D. Dominguez elicit twisted entertainment out of the outlandish psychosocial experiment. 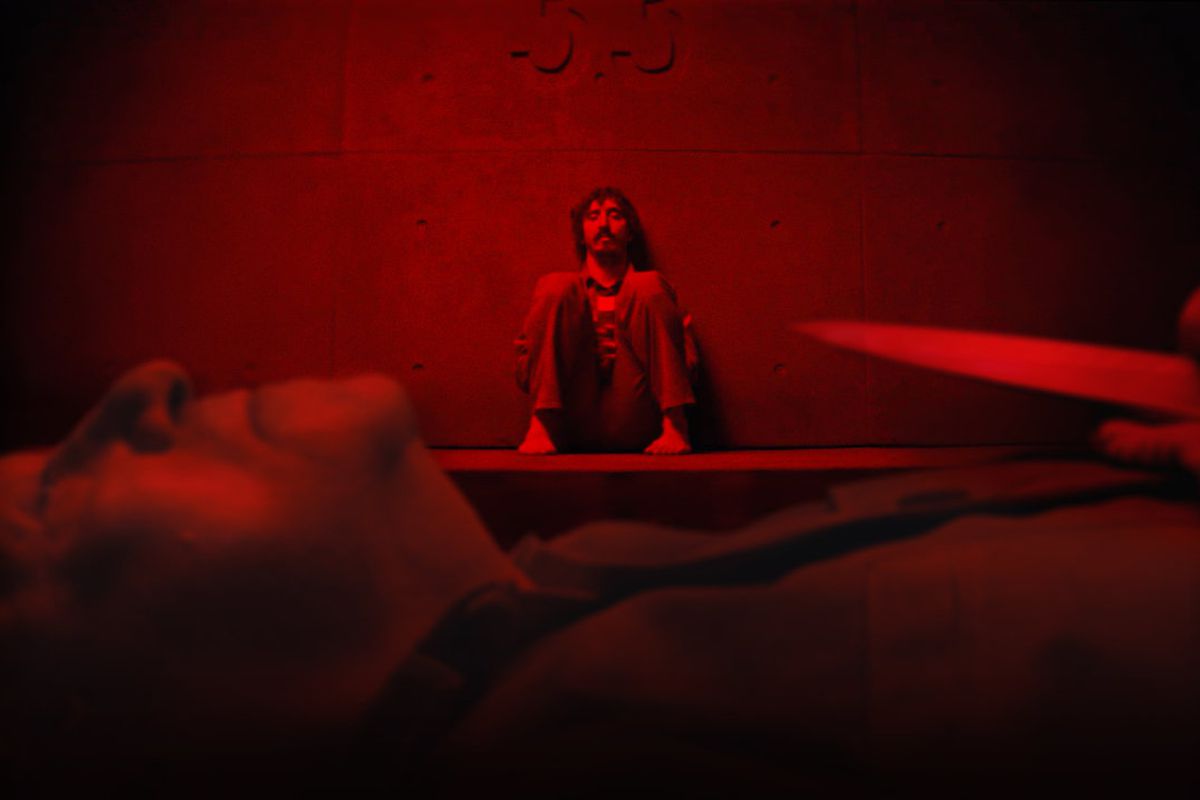 Apart from Snowpiercer, the Spanish chiller reminds us of High-Rise (2015), Canadian cult thriller Cube (1997) and Denis Villeneuve’s acclaimed short-film Next Floor (2008). Nevertheless, the careful world-building here –  explaining the bureaucracy and working mechanisms – keeps alive the tension throughout as the messiah-like Goreng attempts to wield an order among the chaos. In the context of the pandemic, The Platform looks scarier than ever (though not prescient).

In the world of trickle-down solutions, self-entitlement and rigorous self-preservation, the food-scarcity theme resonates deeply. But The Platform’s narrative, despite references to classic literature, withholding religious undertones and extolling the socialist ideals, doesn’t come across as profound. The prison’s trickle-down concept though effective to an extent suffers from overly explanatory expositions. In fact, the visceral metaphors in the final-act go beyond unsubtle and become clumsy. It’s good that at least ‘The Administration’ is left off as a monolithic, faceless entity.

Overall, The Platform (El Hoyo) [94 minutes] is an astonishingly appropriate thriller for these troubled times, blending malleable as well as universal metaphors with a bucketload of violence.

The Career of Chantal Akerman: A Retrospective