Senegalese film-maker Djibril Diop Mambety’s feature-film debut Touki Bouki (The Hyenas Journey, 1973) was hailed for its groundbreaking imagery (within the African film-making context) and for its unconventional editing. Mambety’s cheeky and delirious critique of neo-colonialism isn’t didactic, and moreover the European critics were intrigued by the ‘avant-garde sensibilities of French New Wave’. Touki Bouki focuses on a young ‘outlaw’ couple from Senegal’s capital city Dakar, whose baggage of dreams and illusions rather emphasizes the impossibility of liberation within the African neo-colonial structures. Instead of independence, what the post-colonial African youth was offered is the delusion of Western materialism. But what makes Touki Bouki a unique and memorable African film is the way Mambety enamors the audience with his eclectic mix of color, music and symbolical plus eroticized imagery. Hence Mambety’s influence isn’t just Jean-Luc Godard, but can be traced back to Jean Vigo.

Mambety had no formal training in cinema, unlike the other celebrated Senegalese film-maker Ousmane Sembene (Sembene studied at Moscow film school although he is a generation older than Mambety). While working in Dakar’s national theater as a stage actor, Mambety was expelled for lack of discipline. He immediately set out to make films, and at the age of twenty-four made his first short film Contras’ City (1969). It’s a satirical look at the city of Dakar, its colonial architecture, and the consequences of colonial rule on the indigenous poor population.  Mambety made one more short film (Badou Boy, 1970) before Touki Bouki. Despite the huge critical success of his debut feature, Mambety took a nineteen year hiatus from film-making; the reason for it remains a mystery. 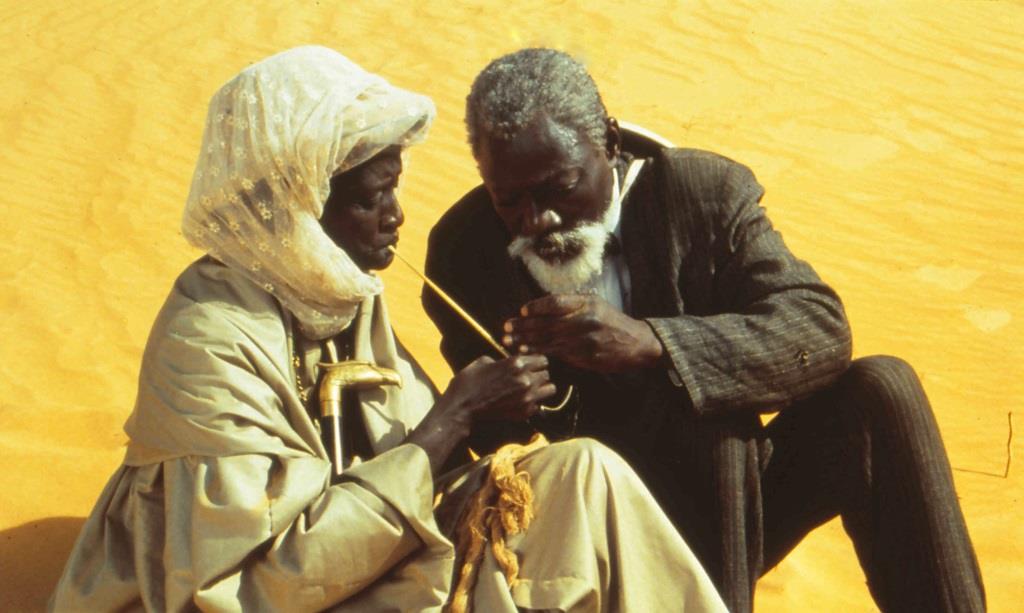 Mambety’s second feature film Hyenas (1992) was as ambitious as Touki Bouki and its narrative scope was bigger. Hyenas is a satirical portrait of an impoverished African community, exploited by the forces within and the forces from outside. Hyenas was loosely adapted from a renowned play The Visit, written by Swiss dramatist Friedrich Dürrenmatt. However, Mambety’s strong authorial voice is undeniable as he perfectly adapts a popular European play to the African setting. While in Touki Bouki, Mambety lampoons the futile dreams imposed by French colonialism, in Hyenas he takes on the bigger enemies of Africa or the human race: the global institutions like the International Monetary Fund (IMF) and World Bank. We witness a marginalized community enveloped by corruption and consumer culture, facilitating its own economic disintegration and playing into the hands of nefarious global forces.

Similar to Touki Bouki, Hyenas isn’t openly political or follows a social-realist narrative to zero on its central theme of power, greed, and corruption. Mambety stages his unflattering portrait of the community through the arrival of a now wealthy former resident, who tempts them to embrace the very human quality of greed over the others. In this way, Mambety explores the hierarchy of exploitation that primarily emerges from within. Sembene’s Mandabi (1968) and Xala (1975) also deal with myriad failings of post-colonial Africa through such layers of exploitation. But Sembene often finds a glimmer of hope for the future, whereas Mambety offers a darker and disheartening vision of humanity.

Hyenas opens with the image of a herd of elephants marching the dry landscape to escape starvation. It’s quickly cut to a group of humans, walking barefoot and dressed in rice bags.  Broken by the woes of poverty, these people of Colobane head to the local market owned by Dramaan Drameh (Mansour Diouf). They sing and cajole Dramaan to offer them a drink, a cigarette although Dramaan’s wife (Faly Gueye) disapproves of such generosity. The town is suffering long from an economic crisis, and deep in debt that debtors take furniture out of the City Hall. This is when the news of Linguere Ramatou’s (Ami Diakhate) upcoming visit reverberates through Colobane. Hailed as a woman ‘richer than the World Bank’, the people of Colobane pin their hopes on Linguere’s newfound wealth. A hilarious town meeting ensues, which is conducted within a dilapidated building with the mayor and other prominent men of the community. And it becomes obvious that the corrupt local practices combined with Linguere’s hidden agenda will lead to a lacerating atmosphere of opportunism and betrayal.

The Mayor of the town and other men believe that Dramaan Drameh is the key to ensure that Linguere pours her money into the community. It’s conceived as the reunion of former lovers, and Dramaan is promised the Mayor post. In fact, Linguere after making her impressive entry into Colobane identifies Dramaan and asks him to address her as ‘his wild cat’. It seems their love has survived the passage of time. But soon we get to know the bad blood between Linguere and Dramaan, which is the reason behind her decades-long exile. Dramaan impregnated Linguere when she was 17. However, in order to marry a woman from a prestigious family and crush the paternity trial, Dramaan conspired to defame her. He bribed two men to testify that Linguere had sexual relations with them. Ostracized from Colobane, Linguere Ramatou became a sex worker, traveling the world, eventually bestowed with greater wealth. 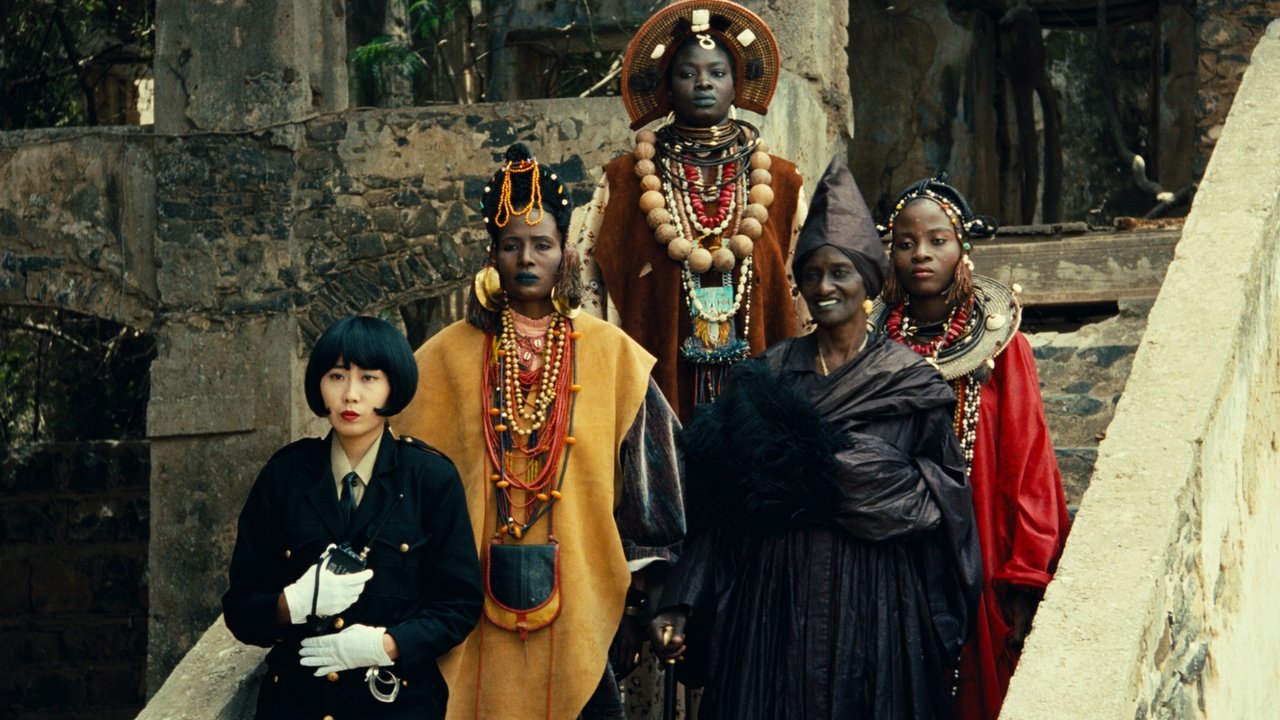 Linguere promises to deliver a hundred thousand million if the people of Colobane murder Dramaan Drameh. The mayor immediately declares that they are not savages to murder their way out of poverty. Under the veil of harmony and humanity, it soon becomes apparent that the people wouldn’t be bothered by the act of murder, provided that everyone could share the communal guilt. Men and women flock Dramaan’s market to buy things on credit despite sporting a new pair of yellow boots. The townspeople are letting Dramaan know that their solidarity comes with a price. When Dramaan goes to the police chief to report on Linguere, the man flashes his new gold teeth and laughs at Dramaan’s distress. Furthermore, the mayor lends a sympathetic ear to Dramaan while surrounded by new furniture and exhibiting his finest Cuban cigar. The priest smiles at the brand new chandelier acquired by the Church.

Dramaan desperately tries to escape the town by train, but a mob of allegedly calm enforcers stops him from taking the train. A carnival is arranged where the people of Colobane are gifted ACs, refrigerators, fans, and washing machines. They rationalize their superficial desires for these electrical appliances, describing how they will be useful. Indirectly, the people are weighing the advantages of sharing the guilt after murdering their beloved local citizen. Linguere cultivates the needs and desires of the people of Colabane, and scoffs at their idea of ‘clean hands’. Calling her rule ‘the reign of hyenas’, she powerfully declares, “You don’t wander the jungle with a ticket to the zoo!” Linguere’s intentions seem to only destroy Dramaan, but gradually it becomes clear that her pain is much deeper, and accordingly, her plans are bigger and sinister. At one point she says, “The world has made me a whore. I’ll turn the world into a whorehouse.”

The Colobane people’s embrace of Western materialism and its false hopes further complicate the already corrupt and exploitative setup. Neo-colonialism thrives in such a quagmire. Linguere’s plans to create economic turmoil and burden the people with debt are unquestionably personal. But her actions aren’t far removed from the international financial institution that pumps millions of money in exchange for people’s complicity in robbing their own land and resources. It’s a question of how much of these allegorical aspects will reach the viewer. But Mambety mentions in an interview how he intentionally included certain elements to make ‘the film universal’, and ‘identify the enemy of humankind’, i.e., the global financial bodies. Mambety emphasizes that this is “why we borrowed elephants from the Masai of Kenya, hyenas from Uganda…. somebody from Japan, and carnival scenes from the annual Carnival of Humanity of the French Communist Party in Paris.”

The inclusion of Linguere’s female Japanese bodyguard (cloaked in kimono in the later sequences) is very intriguing irrespective of the thought that went into it. So is the symbolism that confirms to the African oral tradition; for instance, the recurring motif of hyenas, a symbol of trickery, greed, and social marginality. Mambety himself views Hyenas as his pessimistic view of humans. However, there’s a strong emphasis on humanity (not traditional values) over a triviality, bait of consumption, and short-term riches. After Hyenas, Mambety made two 45-minute narratives, titled ‘Le Franc’ (1994), and ‘The Little Girl Who Sold the Sun’ (1999). He died of lung cancer in July 1998.

Aya [2021]: 'Cannes' Review - A Gentle Coming-of-Age film about Being A Woman and loving your Roots