Hrishikesh Mukherjee’s Anand, which released in March 12, 1971 remains a timeless classic in the history of Indian Cinema. Even though the film marked the 50th year of its release, the Rajesh Khanna-Amitabh Bachchan starrer has secured a perennial spot in the hearts of generations that have since evolved. Lauded by critics and audiences alike, Anand went on to win the National Award for Best Feature Film in Hindi, and garnered five Filmfare Awards- including Best Film. But for all the awards, Anand is a simple film. It tells the story of a terminally ill patient who refuses to await his imminent death and instead, embraces life in its entirety. In all its simplicity, Anand has truly endured and magnificently aged. Below we take a look at the Hrishikesh Mukherjee classic and how it has captured the love of an entire nation.

Anand’s illness is made very clear at the very beginning of the film. Hrishikesh Mukherjee was clear to Gulzar that he wanted his audience to know about Anand’s illness at the very outset. When the film begins, we are introduced to Bhaskar (Amitabh Bachchan) who has been felicitated with a literary award. A doctor by profession, this award seems strange to him as well, as he begins to describe how this book is a result of his diary scribblings about a reality he himself faced in his profession. The story then begins in flashback.

Related to Anand (1971): Joker and the Angry Young Man

In this way, Mukherjee makes sure that Anand’s illness is never exploited to resemble a thriller. The audience is fully aware of the end of Anand as he first makes his appearance on-screen and still hopes for a miracle to take place. Also, this revelation is important to address the thematic core of the film- as Anand himself says in one of the film’s most iconic dialogues- “Babumoshai, zindagi badi honi chahiye, lambi nhi.” (Life must be big, not long.)

The casting of Rajesh Khanna and Amitabh Bachchan 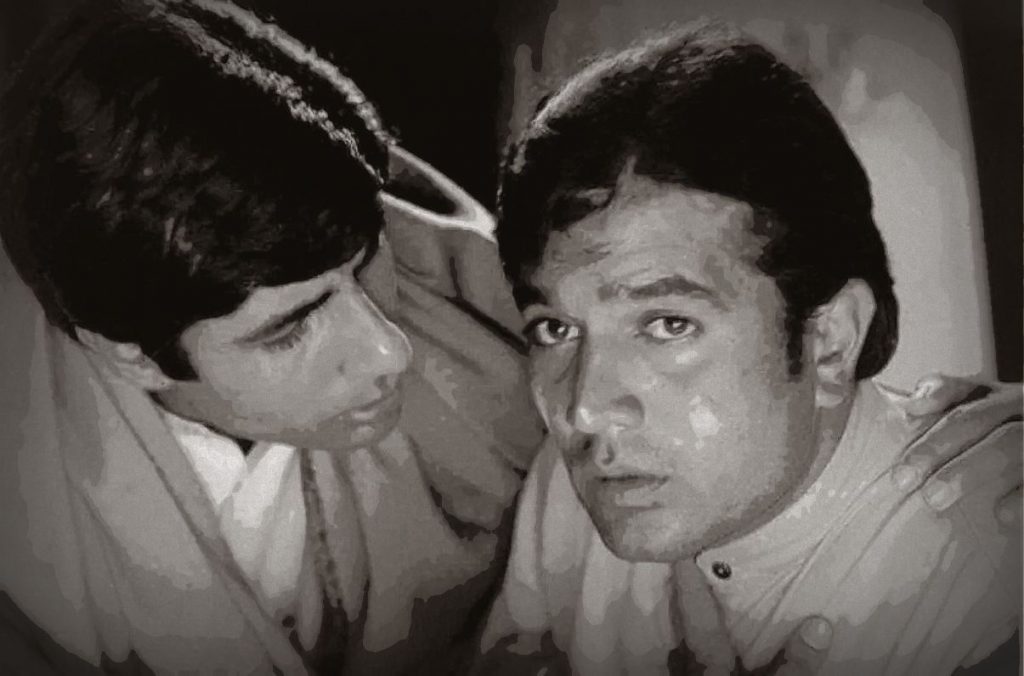 One of the film’s greatest strength is the camaraderie between the two principal characters, Anand and Bhaskar. These two characters are polar opposites: the former is the outgoing, spirited soul- full of energy and enthusiasm, whereas the later too self-contained and inexpressible in every matter. Together, their relationship becomes the soul of the film, beautifully explored and radiantly performed. Even the supporting characters, from Dr. Kulkarni and his supporting wife, from Bhaskar’s romantic interest Renu to the strict matron of the nursing home D’Souza- are all perfectly balanced to suit the narrative thread.

For the lead role of Anand, Rajesh Khanna was cast, although Dharmendra recently revealed that he was upset with Mukherjee’s decision and expressed his disappointment over a phone call. Even in the case for Bachchan, casting him in the role of a Bengali doctor was not the first thought for Hrishikesh Mukherjee, as Soumitra Chaterjee was initial choice. Nevertheless, Bachchan made the cut, with a dozen flops under his kitty. The success of Anand would change his career forever.

One of the strongest, most enduring power of Anand emanates from its soulful, melodious songs composed by the inimitable Salil Chowdhary. From “Jiya Lage Na” to “Zindagi kaisi he paheli haaye”, each song served its own purpose in the narrative without becoming an extension. The lyrics by Gulzar fit in beautifully, and rendered evocative moments of humanity. Who can forget these lines sung by Manna Dey : Jinhone sajaae yahaan mele/Sukh-dukh sang-sang jhele/Vahi chunakar khaamoshi/Yun chali jaae akele kahaan/Zindagi…

The intrinsic value of life

At various points in the film, several supporting characters come to know about Anand’s illness, and are shocked to witness his zest for life stay intact. Anand is a character study of a doomed individual, but simultaneously it is also an ode to the eternal quest of mankind- to relinquish life as much as possible. Anand hurries to finalize the relationship between Renu and Bhaskar, in the quest to secure happiness and joy in his friend’s life. Anand’s spirited nature, his zest for life never hides the truth about mortality. Rather it juxtaposes that idea with hope of staying alive till that last breath. He spreads a smile wherever he goes, forms connections with random individuals by referring them as his long-lost friend Murarilal. “Jab tak zinda hoon, tab tak mara nahin (I am alive until I am dead).” – is the watchword of Anand’s life, and Mukherjee’s film drives that point home with immense grace and beauty.

In the 70s, there was a movement in Hindi Cinema by the name of ‘middle cinema’- one that stood at the midpoint between mainstream commercial cinema and arthouse parallel cinema. Hrishikesh Mukherjee was one of the most important, as well as successful filmmakers in this genre, combining entertainment with prevalent societal issues. Anand begins on a somber note, we see Bhaskor trapped in a system of poverty and inequality, where the malnourished die without proper medical treatment and the privileged spend hundreds on the most trivial pursuit of healthy lifestyle.

By the time Anand enters the narrative, Bhaskor is embittered and stoic, almost cynical. Anand’s entry gives him a new perspective, and the film- a new dimension. He entertains as well as educates Anand to treat each shortcoming with a strategy and a smile. By the end, even Anand starts to believe in miracles, but realizes the importance of Anand’s perspective. The optimism does not negate reality, but synchronizes along with its hard-earned realities.

As Anand completes 50 years of release, its simplicity and clarity of thought remain as distinct as ever. One simply wonders what would Hrishikesh Mukherjee make out of the severe curtailment of content in this era? How would he respond to this generation of leaders and audiences triggered at the slightest notion of discomfort? Surely, he would drive a character like Anand-one who is blind to forces of religion and politics- home before he landed up in trouble for his disruptive attitude. Till then, one can only wonder, and cherish the gift of Anand that never ceases to exist.