Max Harwood makes a heartfelt debut in stage director Jonathan Butterell’s Everybody’s Talking About Jamie, as a gay Sheffield high school student who dreams of becoming a drag queen. Even when the entire class is still dazed about future, Jamie is sure of what he wants to be, resulting in a full-fledged song sequence out a daydream called “You Don’t Even Know It.”

This groundbreaking musical comedy first appeared as a play in 2017, and then as a BBC documentary, Jamie: Drag Queen at 16. Based on the story of a teenager from North East England who came out at 14 and then decided to attend his high school prom in drag. (Watch out for the beautiful end credits where the real Jamie and his mother Margaret are featured.)

Related to Everybody’s Talking About Jamie – THE QUEEN OF FEAR [2018]: ‘SUNDANCE’ REVIEW

What makes Everybody’s Talking About Jamie different is that it is not another coming-of-age tale. The coming out factor does not register here. Jamie is already out and is backed by a hugely supporting mother Margaret (Sarah Lancashire) who never questions her son’s choices and buys him a pair of sparkling red stiletto pumps for his 16th birthday, where the film opens. (Although he craves the attention of his is dad Wayne (Ralph Ineson) who wants no relation with his effeminate son.) There is Ray (Shobna Gulati) who is always there by his mother to support him. In school, Jamie finds rock-support in another outsider Pritti Pasha (Lauren Patel), a Muslim girl with a hijab. 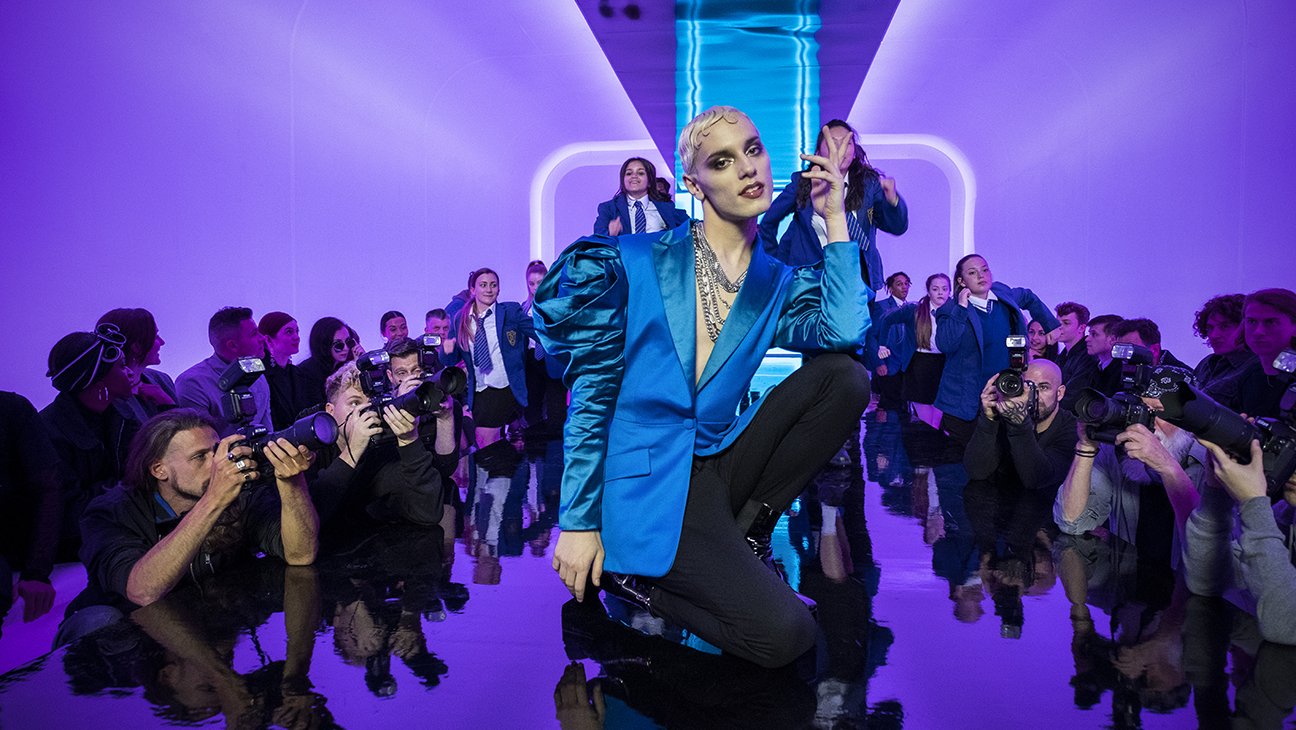 That is to say, Jamie’s real conflict is internal, as RuPaul’s Drag Race says how the fierce drag queens are not born with it. Self-belief is what he needs. Although that does not quite register despite his school bully Dean Paxton (Samuel Bottomley), and careers counselor Miss Hedge (Sharon Horgan). This is mostly because of the cheery song numbers that set the tone for the audience in a way that they know exactly what to expect. Richard E. Grant provides considerable support as the mentor Loco Chanelle, who introduces Jamie to the history of drag queens and how they stand up to mockery without missing a beat. “First rule of drag,” he says. “Shoot first or they’ll shoot you down.”

It is Loco who imparts this knowledge to Jamie with the set-piece “This Was Me”, which is inarguably the movie’s finest moments, where flashbacks to the history of the AIDS crisis, activists are shown. Everybody’s Talking About Jamie could have done with a few more of such sequences, evidently because even though Jamie’s circle of support is rock-solid there are still so many voices who are never quite heard under the impressions. Although Jamie does register the weight of representation with a sense of self-doubt, he is awakened by the blow of his father who never cared for him, and decides to stand up for himself even when Miss Hedge is particularly resolute to not let him stand out.

Even if the end is visible from a mile, Everybody’s Talking About Jamie presents itself with a lot of heart and soul, which makes you stick with Jamie till then. Butterell, hailing from a background in choreography, overloads the narrative with a bit too many flossy song sequences as well as eye-popping vibrancy that do not help to unravel the inner turmoil of Jamie completely. Harwood, with a natural screen presence, dives into Jamie with an instantly likable charm. Much of the exuberance that threatens to evade the beat of the narrative is controlled with his quiet watchfulness. Lancashire is effective as the best mother in the world, although it is Grant who almost steals the film with his indisputable support and sass.

The disruptiveness that comes with acceptance in Everybody’s Talking About Jamie is presented with a revealing sense of hope. Comparisons with Ryan Murphy’s The Prom do not really hold much ground here in the way Jamie talks about self-awareness and insight. Although it still feels a tad bit monotonous because of its irregularities, Everybody’s Talking About Jamie is a much-needed boost for the moments of reflection and the stirring take of hope for anyone who feels different and does not quite know what to do about it. The film’s closing sequences, where the real faces come out, are especially moving.

Everybody’s Talking About Jamie is now streaming on Prime Video