It feels like a plague has hit the festival circuit when at least one Hong sang-soo film isn’t playing. 2019 saw the master minimalist filmmaker taking a much-needed break. There was a lot of speculation that he is prepping for a denser, more ambiguous narrative that would be challenging for both the director and fans. In this context “The Woman Who Ran” (Domangchin yeoja) is not a major departure. It still features traditional Hong sang-soo self-awareness and style but if there was a thing as a truly feminist Hong sang-soo film – this would be it.

Starring real-life partner, muse and frequent collaborator Kim Min-hee (she has starred in 7 of the last 8 films he has made) as Gamhee, the film follows a pretty straight forward episodic structure. Gamhee is a silent, distant and bored middle-aged woman who lives outside Seoul. The three encounters with old acquaintances form the crux of the film. These three women she meets are a reminder of her past life. Having left her husband for the first time in 5 years (she constantly points to this fact) because he is on a business trip, Gamhee’s view of the world has been pretty restrictive.

Hong Sang-soo shoots the film completely in interiors. These three places in which Gamhee meets these strong, independent women are surrounded by mountains. The well-know filmic style of focusing (in cinematic Sang-soo terms – zooming) onto the characters happens often. What’s especially hilarious is Sang-soo’s choice of zooming into a cameo-friendly stray cat – inviting us to see his perspective. The heady male-gaze takes a back seat here. 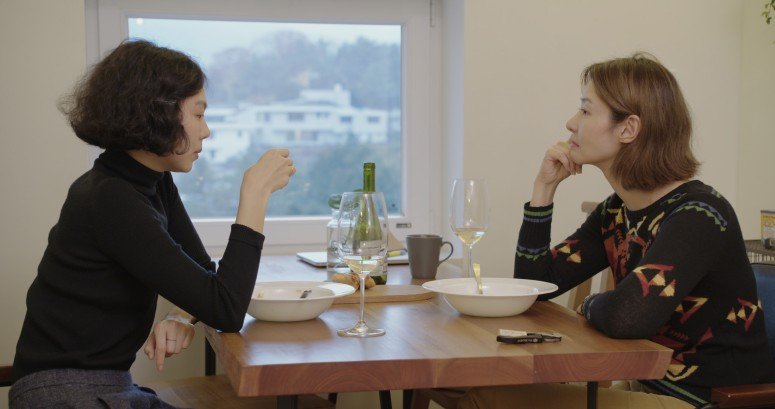 Sango-soo has been blamed to repeat himself in the past. While his stories still feature heartbreak, a lot of simplistic everyday wisdom, a tad bit of self-awareness and a lot of sake, “The Woman Who Ran” doesn’t just dwell on their sadness or sympathizes with their tryst. Instead, it shows their perspective of having to deal with passive-aggressive men.  The three episodic encounters focus on Gamhee getting a proper wake-up call. While she initially seems bored out of her routine marriage, she is seen as an outsider who witnesses these three-men and their respective behavior towards women and the world at large.

The third act features a very self-aware and expected narrative turn where all the speculations that the South Korean auteur repeats himself are put to rest. He knows that he has been doing it for quite some time and will possibly exhaust his possibilities but this charming, blessed tale – that somehow manages to foretell the things that are not talked about, gives his promising career another triumphant flag-up.

The film doesn’t necessarily give a bold, immersive and distinctive character to Kim Min‑hee – unlike On the Beach at Night Alone that used its narrative ambiguity to attune one of her greatest performances out of her. Probably because of the aftermath of the stories that went into the tabloid about their affair – allowing Sang-soo to bestow extreme depth to the character of a woman in complete splits about herself and her life.

With “The Woman Who Ran” (Domangchin yeoja) the director makes a scathing comment on his repetitiveness. He makes sure that we sit around to see the film as more than just ‘good’ and ‘peaceful.’ He implies that with another new experience you have in your life, art formulates a different meaning the next time you visit it.