Most genre films do not tend to recreate the norm. They happily break even, maybe conjure nominal profits, and repeat the cycle again in their comfort zone. This trend has been foremost in films belonging to the apocalypse genre. Normal life is suddenly interrupted by the catastrophe. A couple, at times two, are left to fend for each other. They live in complete isolation, make it their goal to reach a safe camp/base, fight the bad guys, and maybe one of them dies. When they/one of them reach the eventual destination, it turns out the journey is not worth it. That is ladies and gentlemen, ‘Mother/Android’ in a nutshell.

That is all there is to the Chloe Grace starrer. The bad guys in the instant case are androids, or bots, who turn rogue after an EMP is burned. They hunt for humans, who have created several safe camps to gather survivors. The problem here is that there is no revelation of a plan post this; just one of many. The man v. machine theme, the “I am not ready to be a mother but thrust into it so okay” trope, the value of an opportunity for an outsider, have all been explored before ‘Mother/Android’. And rather well. None of these themes are even remotely developed. Some buildup begins, only for it to lose the director’s attention. The film is so predictable that you can even see some of the dialogues coming from a distance. There is no mystery or unraveling of any kind. There only is nowhere for the people involved in making the film to take cover.

It is frustrating to see a movie so inconsistent in tone and confused about what to make of itself. The runtime is a montage of delirious set pieces designed to not go together. They are senseless individually – even more so when viewed collectively. Whimsical is the most appropriate word to describe the execution. ‘Mother/Android’ boasts to be a sci-fi film. But there is no science in it. Some things are so fictional, that the word itself would have to be reinvented to do justice to them. For instance, it would take a fifth grader to tell you who would win in a man vs. machine, powered by cutting-edge AI, contest. Computer-operated drones can strike from a thousand miles away, yet the one in the film miraculously misses from a few yards. 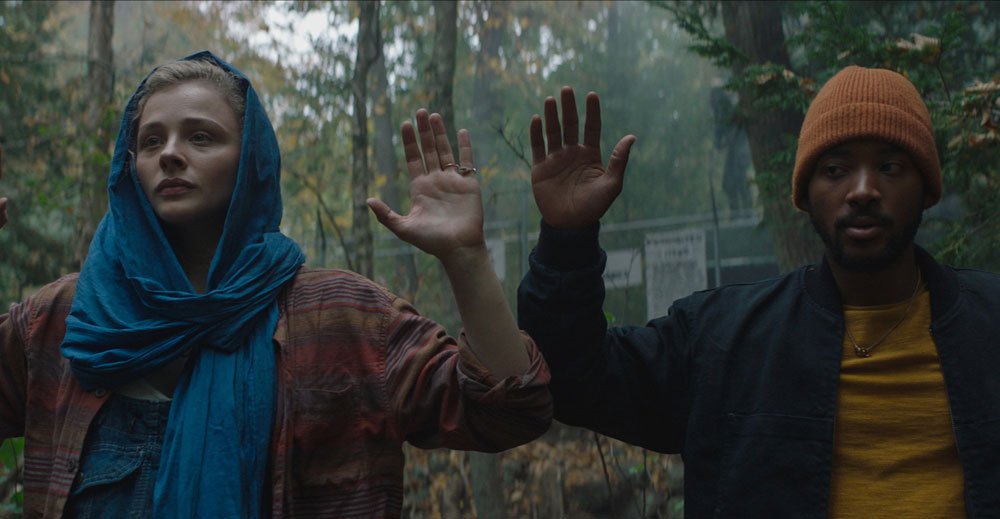 All but one android can mold itself to deceive the protagonist, while the others form part of the act. Why don’t all of them play the part and get them all collectively? In fell swoop. Won’t that be the intelligent thing to do? They are machines, after all. ‘Mother/Android’ is riddled with such holes. Calling them so would have been pardonable. Everything does not have to make logical sense all the time.  But because I did not find any moment of ‘Mother/Android’ redeemable, except the part at the end where Chloe’s character narrates a letter she writes to her child, these flaws hurt even more. And the ending. By that point, even the director wanted to wrap things up and just finish the nightmare.

A lot of things are shortchanged to make the film. Admittedly, the movie did not have the biggest budget. Despite this obstacle, the visual symmetry is on point. There is some degree of immersion into the world the story is set in. But the small budget is no excuse for the makers and producers. Many others have done so much with even little.

The android uprising is no different from a zombie breakout. In fact, at some point, the bots start to behave as stupidly and dimwittedly as zombies in films. Are they supposed to do that? Probably not. The emotional hollowness in the film is deafening. Forming a bond with any of the characters will take some creative backstory on your part. Good luck digging that up! I mean, I know it is not your job, but if you want to like this film, you will have to.

‘Mother/Android’ is a film that should not have been made. Or made differently, at the least. Happily skip past this new Netflix feature. You will save time and probably use it to write a much better story. Or do anything else. Literally, anything would be a better use of the time.

Loved Mother/Android on Netflix? Here are 5 other movies you should check out

The Legend of La Llorona [2022] Review: An Unimpressive Retelling of the Mexican Myth of "The Weeping Woman"