Android Kunjappan Ver 5.25 fails to fall strictly in the definition of a single genre. It appears to be a sci-fi, which it is, but it doesn’t explicitly rover around science and create any environment as such. At its soul lies a family drama that tries to capture a unique father-son relationship while the attire is of a satirical comedy. Seldom do so many flavors come together and provide such a mesmerizing experience. The aspirations of our generation are often found in a tussle with the expectations of the one prior to us.

Our responsibilities evolve into liabilities without any realization and the void inflates to provide room for various arguments. Android Kunjappan picks up its audience and places them right in the middle of this void so that they can see the tension on the rope from both sides. And yet, it convincingly keeps them engaged in a very pleasuring and innovative visual metamorphosis of its principal character.

Bhaskara Pothuval is a short-tempered Luddite in his latter half of life. Soubin Shahir plays Bhaskara’s son Subrahmanian who is an engineer. Bhaskara act is something that keeps the audience held to the film while Android Kunjappan’s act brings life to it. It was a revelation when I found out that Suraj Venjaramoodu is the man under makeup playing Bhaskara in an act so powerful that I couldn’t recognize him for the entire duration of the film. Soubin Shahir is a rising force in the Indian acting scene but I have no qualms when I say that he is not the best thing about this film.

Ratheesh Balakrishnan deserves much applause for his focus on the little details of the closed sphere of village life. He tries to keep the narrative grounded enough that lets his characters explore themselves. At the same time, he has made his little protagonist so expressive that it is a delight to watch him. It is commendable how an artificial object can claim such strong screen presence such that nothing about it feels artificial. There are various supporting characters each played uniquely and confidently by their respective casts. 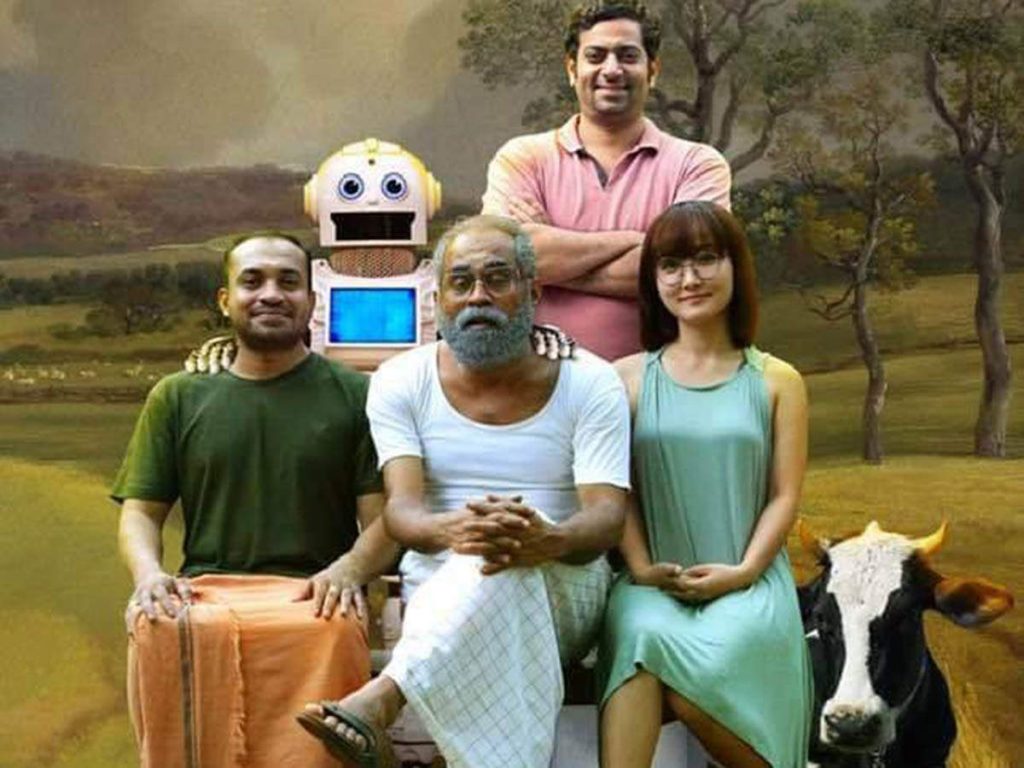 The first half of the film unfolds its events in a patient manner. Introductions are made, backgrounds are created and the story is given a shape of immense possibilities in which one forgets all the constraints inherent to the narrative. Numerous subplots are provided with significant screentime so that they can be employed to propel the narrative when the time arrives. The predictability of the screenplay only becomes evident in hindsight. Android Kunjappan doesn’t try to escape challenges. It captures our concentration on the events in plain sight that we do not worry about the challenges. However, it is not balanced in its approach either, due to which it misses out on the potential of a supporting arc, which I consider worthy of attention.

That being said, Android Kunjappan remains focused and often spoon feeds certain elements for theatrics. As it progresses to its pre-climax, things start to feel rushed. The second half outpaces the first and the climax succumbs to a hurried approach. One feels as if the director lost a portion of his confidence as he fails to weave a strong conclusion to the narrative. A part of it seems deliberate as perhaps, he didn’t want to paint the same in absolute shades. The window for interpretation is not much open but a definite idea isn’t established for what happens when the film ends either.

Sanu John Varughese takes a number of deep focus shots to give an appeal to the various discussions happening onscreen, most of which are hilarious and profound in nature.

Android Kunjappan breaks many stereotypes and rises above the certain rigorous elements as it processes multiple themes. Actresses are allowed to exist in their normal skin with pimples, acnes and dark circles and neither of them are used as mere plot devices even though their roles are small.

Malayalam cinema has built such credibility for itself in the last few years that it can pull the audience into theatres with the least of promotions. My Youtube activity is restricted to some short films and teaser trailers. I happened to come across Android Kunjappan’s trailer when I opened the site to check out the trailer of another film. And it was Android Kunjappan which successfully induced me enough to ensure that I don’t miss this film. And as it arrived a week late in the screens of Delhi-NCR, I was left speculating in fear if it will make it here at all. Kunjappan came, only to invoke a plethora of emotions and thoughts.