A guy in his late twenties, someone who hasn’t left his town for most of his adulthood ought to be a little immature. Ambili, the leading man here, appears a little too cute even after considering his conditions. Perhaps that’s why the film seems to be a little smug about its sweetness. From the very first frames filled with turquoise & peacock blue with its several tones, the film settles a certain ‘tone’, even with its quirkiness. The color palette accompanying ochres and greens along with them is used throughout its duration. It may come off a bit cartoonist as well. Wait for it to settle with your mind and for the characters to unleash a little more about themselves. Ambili (the film) manages that, not just with the dialogues, but also with the unspoken in-betweens.

While the journey is necessarily about Ambili (Soubin Shahir), the film serves most of the characters to share what it means to live like him. His childish behavior might have to do with not being able to grow as others do. But the traumas from his past from the death of his family members appear to have a strong impact on him as well. He used to live with his army-officer father at Kashmir and had to move back to his hometown after their sudden departure. To put it precisely, he hasn’t grown out of it. And the effects of this seemingly post-traumatic disorder keeps him in a cage within himself. If not for Teena (Tanvi Ram), he might have felt all alone for all the while.

Similar to Ambili: TOP MALAYALAM MOVIES OF 2018 AND WHERE TO WATCH THEM ONLINE

Her character appears to be his only connection to the other world. And her strange fascination about him has to do with their shared childhood with one another. She grows up, but he doesn’t. But his immature antics don’t bother their relationship, even if it was mostly about their interactions over Skype. Her brother, Boby (Naveen Nazim), is not fond of Ambili or his cuteness. Having grown in different places among the societies where the interpersonal distance is the key to ‘being good to each other’, Ambili’s enthusiasm and fondness don’t gel with him. After all, he has become a known face by now as a bicycle-rider who has achievements known to the outer world. Ambili appears like a clown-figure from his perspective, even if he was the one who had given him the lessons for riding. 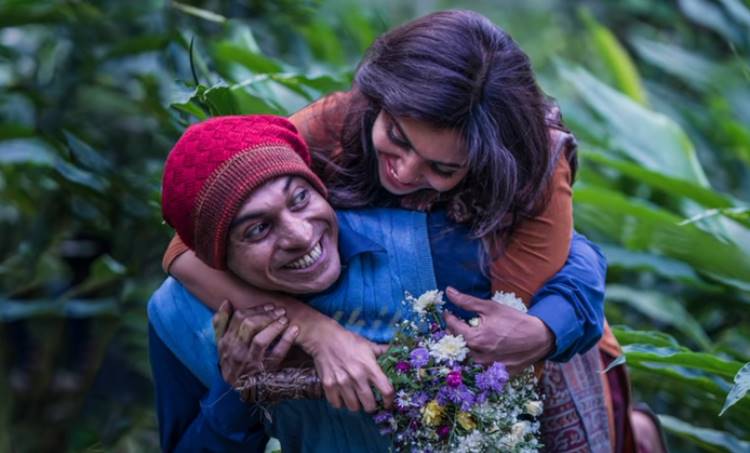 Since travel makes a person wiser, as we’ve already seen and read many times, Boby plans to cover the distance from Kerala to Kashmir, just on his bicycle. He comes across various kinds of people yet he’s never able to share the warmth with the locals that Ambili can. By juxtaposing his journey with Ambili, who hasn’t traveled even an inch away from his town and still nurtured limitless compassion over the years; the film unveils its layers for not just his character but also for the world that we live in. A world where secrecy or a distance has become a norm, where even the simple humane feelings are rare to find and where a selfless loving creature such as him is a rarity.

The film wouldn’t have been able to evoke such nuanced outlook if not for all of its aspects working in the right direction. Soubin Shahir’s performance, a clear highlight, in this case, was what attracted me towards this piece in the first place. Just a small teaser of him, dancing to the offbeat tunes, had enough power to engage regardless of where you come from. And his overall performance just affirms my notion that he is one of the most skilled actors working today. Just look at a moment where he is reminiscing while sitting on the steps of their old house, and returning to the eventual reality. Even in a single second, he can travel from a bundle of emotions of all the joys and the sorrows. Not just the mannerisms attached to such character, but he’s able to pull off an outward sincerity with his eyes.

From the music tracks, the supremely catchy ‘Njan Jackson Allada’ and melodious ‘Aaradhike’ are the soul of the film. The other tracks, although functional, are not that memorable. The comic elements are elements in the film are in abundance, backed often by Ambili’s kind-hearted but dull-witted persona. The scenes that offer laughs aren’t inventive, but they merge well with the setting.

The newcomer Tanvi Ram is also impressive as Teena, even after having only a few scenes. Still, she isn’t given much to work upon to speak solely about her performance. That is perhaps my sole issue with the film, which leaves the romantic arc hanging, without ever revisiting it. And Teena is not known apart from this angle, with her more dimensional personality. With a feel-good film filled with a constant sense of melancholy, it leaves you feeling a little dry. The problem with connecting thoroughly with the film is how it owes to a wider picture and misses out on to the relatable moment. While showing how he instantly bonds with others, it forgets to get to how it affects him on a personal level. Not that the film is devoid of that. It certainly has some tearjerker moments. But it suffers slightly because of not having enough personal approach.

And yet, the film triumphs in the end with the unbinding Genuity of Ambili, that occasionally overwhelms, but never disappoints. After this and Kumbalangi Nights, Soubin has become a largely promising actor, someone I’ll be looking forward to seeing on the big screen.