Home»Reviews»Films This Week»Thanneermathan Dinangal [2019] Review: A Time-Capsule with Just The Right Kind of Aftertaste
Films This Week/Reviews

It was just a week ago when a friend was almost teasing me over my sudden obsession for Malayalam films. Not that I hadn’t seen any of the films made in the language before, but I started sharing the news about the recent releases as if they are my own projects. I’ve never done that for Marathi films even if it’s my mother-tongue. I guess what led many like me towards this continuous gushing are the constant gems that the industry is churning out; Thanneermathan Dinangal being the recent example.

Titled as Watermelon Days in English, this film is a coming-of-age romantic comedy that works as a nostalgia trip. And even after having the obvious genre tropes regarding exams, love or heartbreak, the film always remains organic. And one doesn’t need to have gone through the exact experiences being shown in the film to relate to them. It’s actually about the heightened emotions, a sudden adrenaline rush, where even being called out in a principal’s office or failing in an inconsequential surprise test might seem like the end of the world. The film cherishes these moments from a unique perspective.

Jaison (played by Mathew Thomas) is not an immensely likable guy nor is he suffering from the misfit-syndrome. Having been newly shifted to the school, he makes himself appear like a know-it-all guy. At first, he genuinely looks genius with his typical first-bencher antics. But, the façade doesn’t last long where he starts to acknowledge his classmates. While often being goofy and lost in himself, his behavioral change makes him notice even the smallest things around him, one of them being Keerthi (Anaswara Rajan) whose laugh instantly attracts him. He starts gushing about it with his friends without even having spoken with her.

But it doesn’t take much time for him to lose confidence especially when a prominent personality comes in their lives. Ravi Padmanabhan (Vineeth Sreenivasan), a new teacher appointed in their school to teach Malayalam, woos all the students within a few interactions. Not Jaison though. He finds something odd in his demeanor and wonders how no one else finds anything to object in his quickly likable persona. The hatred isn’t one-sided though, as this new teacher is often shown to be taking a dig at him just for the sake of it. 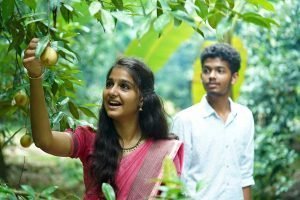 The two problems, which he goes on about as the only ‘despairs’ from his life while describing to his cousin, are just about this girl not liking him back and the teacher who stops him from enjoying any joyous situation in his life. While surviving through both of these, he also gets in a fight with a student from another class, apparently a macho guy, resulting in the third problem from his life. While much of these are the clichés associated with everyone like Jaison, they are presented as first-hand experiences. Even their love-triangle that goes through the usual turns of romance like jealousy, disapproval, and yearning, it never loses the relatability because of its grounded approach.

The moments filled with cutesiness are peppered throughout the film, which is benefited largely by its direction. What is particularly affecting is the aftertaste of the smallest moments. Not that they don’t work on their own, but the cumulative effect is much more rewarding, be it a scene of Jaison getting soaked in the rain the middle of the chaos from his life or be it Keerthi gently observing him and his behavioral pattern. And the tracks add a certain flair to it, among which Jaathikkathottam is a clear highlight for the clear depiction of their brooding romance. The cinematography is exquisite, not just for this particular track, but for the whole duration which makes great use of natural light while also relying on the lens-types to bring the desired effect. Just look at the beginning of this song, where both of them are merely sitting while facing opposite sides. The wide-angle does not solely capture them both but makes the distance between them appear significantly lesser while syncing perfectly with the tune’s playful beginning.

The film rarely works with the subtext but does not suffer from the lack of it. It’s hardly the point of the film say anything on the cerebral level. The emotions are derived substantially from the brilliant performances by almost everyone. Especially Mathew Thomas who creates Jaison’s incompetent yet hopeless romantic figure, largely endearing. The tonal shifts from the writing relied heavily on his ability to shift between confidence to rage to cheeriness to the joy of a stolen moment. And he succeeds marvelously. Not to say Anaswara or Vineeth is any less impressive, but Mathew emerges as a promising actor to look up to.

In the end, Thanneermathan Dinangal becomes a highly rewarding nostalgic trip that benefits from its excellent performances. And it is self-aware of the desired effect which doesn’t leave it at a tacky end.