To enjoy brown sugar, one must have a uniform flame and that cannot be achieved in a wooden match stick, a wax match stick is needed for the purpose. These sticks are called ‘Cat Sticks’.

The speciality of brown sugar is the thick white smoke it emits, Ronny Sen’s ‘Cat Sticks’ is just like this smoke, you have to catch it before it vanishes in thin air. ‘Cat Sticks’ presents us with a dark Kolkata infested with drug addict junkies. The timeline is not specific yet there is a sense of the early 2000s in the film. This unique narrative takes place during one night in Kolkata when the city is sleeping yet the addicts are searching for drugs.

The narrative unfolds in a manner that presents us with four parallel actions going on. These people have nothing in common apart from their interest and indulgence in drugs.

The film opens with a sequence where we find Ronnie (Sumeet Thakur), Deshik (Saurabh Saraswat) and Biplab (Ronnie) smoking brown sugar in a broken ‘KING’ aeroplane which is located in desolate grassland. This location carries the overall sense of the devastation of their social status and their mental status. This setting also emphasizes Devika Dave’s magisterial art direction, in particular, it evokes a sensation in the viewer’s mind. To conjure up something like this on the screen takes a special mention in a big way. 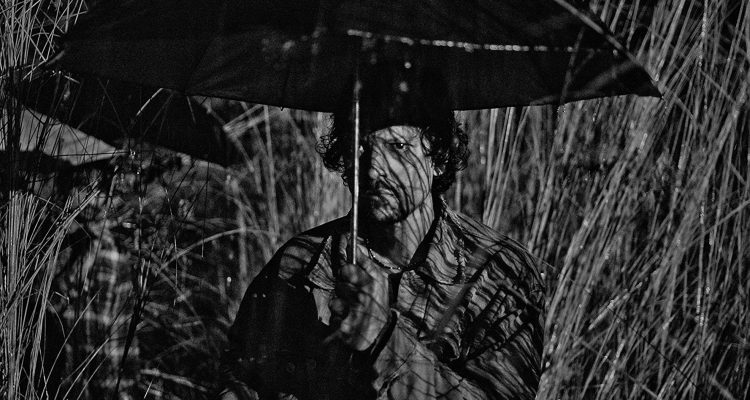 Another arc of ‘Cat Sticks’ follows three young men-Tammana (Joyraj Bhattacharjee), Gere da (Soumyajit Majumdar) and Toto (Kalpan Mitra)- on their way of meeting David who would sell them the drugs. This arc takes us to the dark alleys of Kolkata and makes us wait and absorb the ‘dead time’ to the fullest. In this particular sequence Ronny Sen explores deadpan humour in a very innovative way. It is also noteworthy not just for this arc of the narrative but also for other three arcs that ‘Cat Sticks’ plays out dry, dead emotions and sketches the eroded social memory with thoughtfully, masterfully crafted dialogues that give us a sense of delirium and sometimes at the cost of realism.

In another arc, we see Byang (Tanmay Dhanania) and Potol (Sounak Kundu) and their struggle to find drugs for the night. Their search yields some of the most memorable moments of the film. All the locations in ‘Cat Sticks’ are a treat to the eye. Byang and Potol carry the locations in their physicality. As they change their spaces and the narrative goes forward, we see their physicality to change in a way. This arc ends in the river. In this film, the River Ganges is stripped of its sanctity and turned into just a waterbody where the junkies come to speak their irrational minds. Byang’s dialogue, “Kire bolli somudra dekhabi, nadi te nie eli keno re? ” (You told me that you would take me to the sea but now you have taken me to a river, why?) put forward layers of coded metaphors. Here the Ganges is just a river and Kolkata is just a city, all these characters are socially eroded and culturally disdained agents of a failing political and social system. The constant remarks by Tammana or Gere da capture the state of the dilapidated communist regime in Bengal of that era. The city has discarded all hopes from these men and women and left them in these spaces. ‘Cat Sticks’ is shot in 16 days; the constant flow of scenes makes us realise that extreme hard work and passion have gone into the recce and the planning part. This film not just presents us with a fresh perspective but it lends us a new pair of eyes to look at the society.

Ronny Sen’s mind and Shreya Dev Dube’s eye have conjured up a film that is replete with great frames about which tons of pages could be written. But let us consider this one, a boy is having his dinner and against him is sitting a man (Raja Chakravorty) preparing his brown sugar. Just above them, a picture of Taj Mahal is pasted on the wall. And all of this seems fairly natural. This single shot is a reason to watch the film again and again.

In the fourth arc, Shreya’s camera follows this man who changes into a transvestite at night. It is important to mention that this transvestite-father changes his cloth in a locked-down factory. This setting for changing clothes can speak a lot. It not only comments on the labour situation of a state but also makes us take notice of the director who deftly handles the notion of ‘Show, don’t tell’.

All disciplines have worked beyond brilliance in this film but what strikes the most is acting. Each and every performance is accurate. In mid shots, they act with their body, in close-ups they act with their face and in long shots they act with space. The ‘Niddle ballet’ (Where Byang and Potol are finding veins to inject) sequence is a rare instance when Byang (Tanmay Dhanania) and Potol (Sounak Kundu) have achieved the almost unachievable quality of acting. Among all superb performances, Toto’s (Kalpan Mitra) part seems a bit out of the place, his deed does not strike a chord. But then again Raja Chakravorty, Saurabh Saraswat or Sounak Kundu have set the bar really high. Their souls get reflected on their faces. ‘Cat Sticks’ re-establishes the power of honest casting in Bengali Cinema. This is the sole reason that all the characters have found the perfect actors to play their roles. This is not a very usual case in our part of the world.

Shot with an Alexa Mini ‘Cat Sticks’ has set a new standard in cinematography. The black and white images are going to stay with us for a long time. The use of zonal lighting and hard shadows embody the story in an unsurpassed way. The shot taking and image quality have a very raw quality attached to it. All the actions take place during the night yet the sudden direct light in the ‘Niddle ballet’ sequence proves that Shreya’s vision has surpassed realism and accommodated newer forms of expressions in the film-making. Shreya constantly uses de-focused shots to incorporate the mental state of the drug users as well.

Sound designer Sukanta Mazumdar adds small but significant effects on the soundscape and achieves a very earthy design. When Deshik enters his room, we get to hear a nagging sound of the ceiling fan- this adds on to his character. Sukanta Majumdar submerges us into the dark underbelly of Kolkata with his immaculate design. Composer Oliver weeks has done a stupendous job in ‘Cat Sticks’, his music supports the agony and the anxiety that each character bears within themselves. His music is new to the ears.

‘Cat Sticks’ stands out from the heap of mediocre films in Bengal and holds the flag of the international quality very high. This film along with some other good works in recent Bengali cinema (Labour of Love/Sahaj Pather Goppo/Bakita Byaktigata/Rainbow Jelly) proves by and large that a quality Bengali cinema is still possible. But it will only come from the periphery of the industry and not from inside.