Home»Reviews»Films This Week»Ashleel Udyog Mitra Mandal [2020] Review: A Fever Dream that Works Only While It’s High on Fever
Films This Week/Reviews

‘Ashleel Udyog Mitra Mandal’ (AUMM) is this week’s Marathi-language release. After its premiere in the MAMI film festival in 2018, the film has finally gotten a wide theatrical release. And to reach a wider audience, the film was marketed with a tagline – ‘Handi Futnar’ (loosely translated as ‘the pot will get broken’). This is in reference to an Indian festival called Dahi-handi, where a similar action takes place as an act of devotion towards Lord Krishna (a Hindu deity). The film also tries to break many things, more so the social conventions or barriers. A shattering piece of film such as this is bound to be called as ‘ambitious’.

While AUMM does not soar high on every ground, it succeeds in some of them. To a degree, the film felt like a Dylan song to me for what he used to get criticized for back then – for not presenting any solutions and only working on awareness about their reality. As a film, AUMM also tries to be an eye-opener while often becoming the sex-deprived spectator watching it.  It embodies this very personality and carves a protagonist out of such a rarely-talked-about trait (in terms of Indian cinema). However, at the same time, the film seems too confused about what it wants to convey or whether it wants to preach anything or not. As a viewer, you just keep tying and untying the knots of the correlations between much of what appears on the screen.

The protagonist in AUMM is a 21-year old Aatish (Abhay Mahajan), who is repressed due to the lack of any kind of sexual pleasure in his actual life. He had a crush on someone during his school-days. That bright-eyed girl – Sana (Parna Pethe) appears much more courageous, confident and firm about her desires. She rejects his proposal at the time, in the hope of him understanding the consent. But, the sex-starved kid in him is heavily influenced by the pop-culture and the pornographic magazines in those days. He can’t even talk about it with his orthodox family even while ironically his father is asked to give lectures on post-modernism at places. The lack of ‘satisfaction’ in this direction led to a stagnation in his mental growth.

During that time, he finds Savita Bhabhi- a female porn-star’s character from those comical magazines. Even mentioning her is considered banal in an Indian society, which is reflected in blurring or muting every mention of her name in the film. So it is obvious that she is a secret for several Indian men – a sexual fantasy that they can’t attain in their real life. Aatish is one of those. In this film, he represents their mentality. He even goes on to bring the same Savita Bhabhi as a host for the Dahi-handi event. A clear dilemma about an entirely fictional character and its non-existence, in reality, is inevitable. It appears here and it unfolds in the form of fantasies of Aatish.

As a result of this divide between reality and fiction, several sequences in the film work like a fever dream. They have surreal implications due to the film’s technical expertise besides the character-motivation.  A film shifting between the genres of magic realism and realistic fiction – feels just like an extension of his fantasy. As a result, all the characters besides him appear to be just the pieces on his chessboard. (Refer to the recurring characters of Amey Wagh) 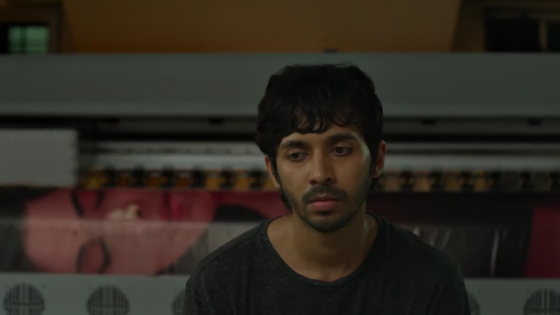 Of course, it has to do with the powerful world-building by the cinematographer Satyajit Shobha Shriram and the score by Saket Kanetker. For something that largely plays with the effect of neon-lights, Satyajit captures Aatish’s bleak reality and his existential dread while making it more believable for the viewers. Especially his conversations with Savita Bhabhi (played by Sai Tamhankar) keep you engrossed in this deeply flawed character. The lights alienate them from social pressures.

But as mentioned earlier, AUMM works largely when it is high on this wild fever. It even reminds one, of the likes of Nicholas Winding Refn – beyond just the stylistic similarities. And whenever it switches to a more realistic depiction, it becomes uninteresting and often repetitive. And it loses that fascinating nature whenever it tries to be self-aware and ends up elaborating a tad more than necessary. Thus, it often becomes a lecture on being progressive. That preaching fits awkwardly with the overall tone of the film.

Why do we need moral lessoning when we can understand the moral stance? If most of the film is ambiguous, what is the need of pornographic character literally speaking about the social implications? Wouldn’t that defeat the purpose of creating a collectively subliminal impact? And if the film is only trying to explore the personalities of Aatish and Sana in relation to the bourgeois norms of sexuality, why does it spend much of its time of the ‘event’ which is not as consequential?

Perhaps the lack of clear focus makes Alok Rajwade’s Ashleel Udyog Mitra Mandal – a highly ambitious film, if not a completely satisfying film. It dares to ask questions – which is all we can ask from a film in the current political climate.