Try as one might, a faithful remake’s chances to succeed need a more powerful word than ‘rare’. Every time I see a bad remake of a foreign film that had got a lukewarm response, I realize I was better off watching the original. At least that would have been more ‘original’. Nevertheless, Dhamaka, a remake of the 2013 Korean thriller ‘The Terror Live’ does live to those kinds of expectations. It takes a middling original and makes it look exceptionally bad.

The Terror Live, directed by Kim Byung-Koo, isn’t particularly smart. Well, not as smart as its great contemporary genre rivals. However, the disbelief-suspending silliness somehow translates decently on the screen. Subtitle writers try to save the translation with lines like, “Stay Live to Stay Alive”, arguably the film’s punchline. Also, it makes, “I’ll blow up the Mapo bridge” look convincing in terms of its tension. However, that’s nearly all I can say in favor of the film, which overdoes the emotion so awfully that it only comes off as below average. The fact that Ram Madhvani uses such tepid source material to craft his Netflix newsroom thriller, was not so unconvincing as it was intriguing.

The reason is the competence of Madhvani as a filmmaker. He’s a director who clearly has the ability to produce nail-biting tension out of peaceful moments. He also has the ability to make the familiar look entertaining. For example, his compelling late-career sophomore feature film Neerja looks like an unsettling original story of courage and resilience. This, when it’s a biopic based on an infact well-known hijack. He remade the first season of the Dutch show Penoza with conviction in Aarya. This too, was a successful attempt at telling a story with well-made and well-acted skill, even as it stumbled in many places. What binds them all is a very sensitive understanding of women and their capable reasoning. Dhamaka, on the other hand, centers itself on the protagonist Arjun Pathak and his male reasoning.

While in these times of gender fluidity this shouldn’t matter at all, it’s quite a grave problem in Dhamaka. The film is essentially a conversation between two men- Arjun on his first Prime Time slot in months, and a terrorist. However, it requires giving up a sense of questioning from the audience. There’s so much repetition in this display of helpless masculinity that what is supposed to be nail-biting, turns out to be nail hammering. Gradually, the film loses the layers of its own plot.

Arjun Pathak is a young prime-time anchor. He got demoted to become a Radio Jockey on the down floor of the headquarters of TRTV broadcasters. He’s also undergoing a tough process of divorcing his wife Saumya, incidentally a reporter for TRTV. 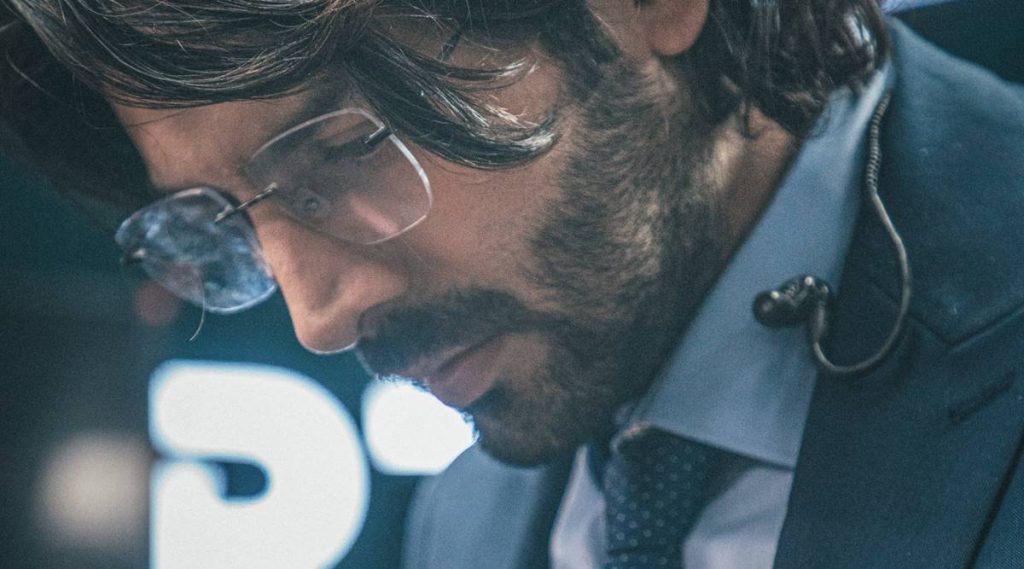 While on air with his morning show, Pathak receives a hacked call by a certain Raghubeer Mhata. Mhata, in a clearly labored rural accent, says that he’s a construction worker and he’ll bomb up the sea link because he made it. At first, irritated and then shocked by this strange incident (the bombing does happen in no time), Pathak dials his boss Ankita Bose. After intriguing her with the story, manipulates her to seize his prime-time back as a deal. The rest of the film follows it all in real-time, meanwhile also uncovering the identity and intentions of the working class.

A basic rule of adapting a foreign work of art in your own milieu is to make it fit into your cultural context. To be fair, it does make a few attempts. There are a few nice touches, such as a ‘Hindu’ terrorist. The way Ankita orders the showrunners to replay the car falling scene with high-volume emotional music and gives Arjun a specific angle to shift his gears from manipulative to patriotic is pure gold. This specifically works because Amrutha Subhash nails the bitch-face. In fact, the whole media mishap scenario perfectly translates as everything wrong with Indian media.

At the cost of unsuccessfully placing the tension, Dhamaka doesn’t even properly use its actors. Amrutha Subhash is brilliant in her scenes, but the writing doesn’t let her do much without her evil, unsympathetic vamp charisma. The only interesting thing about Mrunal Thakur is the fact that we only get to see her on particular screens, such as a phone and a news projector. What this remains is a Kartik Aaryan show- which, of course, is one of the film’s mistakes. Kartik is an okay actor- he’s terribly surface-level. Although he visibly has the hangover of the over-smart rom-com he has made a living from, he nicely packs in the dual nature of Arjun. However, he’s just not convincing enough to pull off the smarter, more mature bits. I do think that doing an out of comfort zone film is a good chance for him.

That’s practically all there is to Dhamaka. Shot entirely in the pandemic, the film wrapped up only in a span of ten days in actual buildings. However, it’s exceptionally hurried. And thus, it comes off not just as bland but also illogical and unintentionally funny. In one particular scene, the PA of a minister gets killed on live television, but no one has the good sense to cut the bit! I doubt if India’s sensation-hungry media would go to that extent, though. The film tries so hard to be urgent that vital people appear on screen in almost no time since they left. The score that propels sequences is simply irrelevant, and there are two misplaced and forgettable songs. However, the technical work involved succumbs to flat editing and terrible cinematography. But nothing looks as cheap as the use of CGI here, a given now for an Indian film.

Dhamaka is thoroughly unsubtle as a remake. But even as a standalone, it’s quite mediocre. It’s also a unique failure, one that Netflix’s non-English films have aced now. I’d still look forward to Ram Madhvani’s second season of Aarya, and Kartik’s collaboration with Hansal Mehta. Here’s to unpromising beginnings!