Home»OTT»MUBI»Revisiting 27 Down [1974] On MUBI: Some Journeys Linger On In Our Minds
MUBI/Reviews

“Phir koi pul hai kya? Lagta hai pul hi hai…(Is it a bridge again? I guess it is…)” This is the inner conversation, Sanjay, the protagonist of 27 Down (1974) is having with himself in the eponymous train traveling from Bombay to Varanasi. He is drifting aimlessly without any plan and starts to ruminate on his life beginning from childhood. And, thus begins the journey of Sanjay’s life in the film mirroring the journey of 27 Down Bombay-Varanasi Express.

Sanjay (M.K. Raina, who played Preity Zinta’s father in the 2004 film Lakshya) has no fond memories of childhood and feels he has spent most of it traveling in train compartments. His father whom he calls Anna (Om Shivpuri) is a locomotive driver and has a domineering presence over him. Sanjay grows up under his father’s authoritarian rule and never dares to disobey him. It is in Mumbai while pursuing an arts degree that Sanjay gets to breathe the air of freedom. In a letter addressed to Sanjay, Anna advises him not to eat street food nor to roam around at night among the many do’s and don’ts. But Sanjay does exactly the opposite. However, these newly grown wings are clipped very soon.

Similar To 27 Down: KAUL – A CALLING [2016] REVIEW: A VISCERAL PHILOSOPHICAL EXPERIENCE

Anna calls Sanjay back to the town of Bhusawal as he has managed to get him the job of a ticket checker. He emotionally blackmails Sanjay by saying he can’t manage on his own any longer (as his one leg had been crippled in a train accident long ago). Sanjay is left with no choice but to leave his art studies and take up the job. In a rather funny interview with the railway supervisor, Sanjay mentions two towns as his place of birth as he was born in a traveling train between the two stations. He quickly sets into his new role and starts moving around in trains; making them his mobile abode. He eats, sleeps, and lives in trains even when off duty. This entire sequence of Sanjay being on the move is scored brilliantly employing the percussion of tabla that complements the kinetic visuals of the rail journey. All through the film, Indian classical music has been used very intelligently and tastefully by the director Awtar Krishna Kaul. The latter sensitive moments of the film engage the soothing strings of sitar, sarod, and santoor, quite enchantingly. 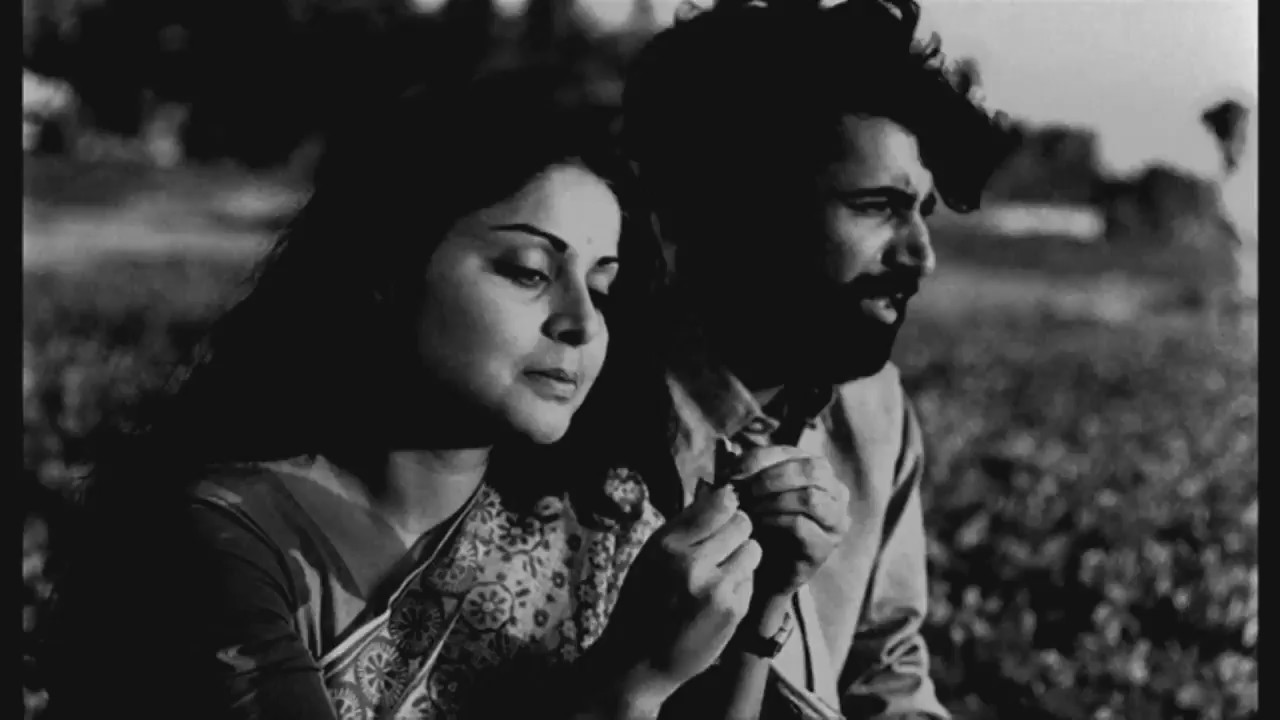 Sanjay meets Shalini (Rakhee) on a suburban train who works in the LIC office at Victoria Terminus. They both develop a friendship and after a few days, she invites him to her rented apartment in Kurla. She offers him tea by asking ‘Aap chai lenge?’ and the scene cuts to a cafe at VT station where they are seen drinking tea. They have started addressing each other as ‘tum’ now, indicating the progression in their relationship. The blossoming of their love has been captured beautifully in a few scenes. Sanjay, who initially liked meeting Shalini in crowded places, mainly at the station cafes, no longer prefers the noise of traffic and people. He has begun to enjoy the calm and peace of silent places while meeting her. This is a major transition in his life as the external world’s noise served as an escape from loneliness for Sanjay. But, a scared Sanjay is still clouded by fear. In a scene where the two lovebirds are sitting on a beach, he remarks that whenever he sees their shadow together, he sees one more shadow, and that is of Anna. Unfortunately, his premonition does come true later in the film.

While Sanjay is in Pune along with Shalini to meet her grandfather and her younger siblings, Anna has reached his flat in Kalyan. On enquiring with his flatmate Bhau, Anna learns about Sanjay’s affair with Shalini. Sanjay is soon summoned to Bhusawal by Anna through a telegram citing he is critically ill. On reaching Bhusawal, Sanjay learns that Anna has feigned his illness so that Sanjay is compelled to come quickly. Anna has already fixed Sanjay’s marriage to a girl from Jalgaon. He emotionally blackmails Sanjay by reminding him of his dead mother, and finally, Sanjay is again left with no choice but to comply with his father’s decision. The hope of discovering a new path is crushed by bringing him back on the fixed railway path, says a shattered Sanjay in an inner monologue.

Awtar Kaul intersperses the film’s screenplay with frequent dashes of humor, mostly dry and dark in tonality. For instance, during the marriage scene, Anna proudly mentions to Sanjay that his father in law is giving him a few buffaloes that would help him generate a substantial income. Sanjay is bemused by this proposition. There are many scenes in the film that are quite funny, especially the conversations between Anna and Sanjay, and the nagging by his traditional wife (with whom he doesn’t connect at all). He finally decides to run away from all his problems by traveling to Varanasi in 27 Down. The flashback ends here. While in Varanasi, he drifts around the ghats by the Ganges River and observes the sadhus and pilgrims. Beautiful visuals are accompanied by the soulful sounds of Pandit Hariprasad Chaurasia’s flute. Sanjay spends a night with a prostitute and comes back to his room to sleep. He is rudely woken up by a nightmarish dream in which he is found dead in a train compartment. This jolts him and he decides to quickly rush back to his normal life in Kalyan.

On coming back, he is again disillusioned by the atmosphere and culture at home. But this time, he decides to leave his wife and return to Shalini. He goes to her home in Kurla and proposes to her to come back into his life. She asks him to meet her the next day at 5 pm in Kurla station. Sanjay is seen boarding the train the next day for Kurla. When Kurla arrives and he gets up to alight from the train, he stops. Yet again, he loses the courage to take the reins of his life in his hands and decide for himself. The chain of inaction and indecisiveness has crippled him such that there seems to be no way of undoing it. Sanjay is finally seen continuing his journey on the train. The film ends.

Based on the Hindi novel ‘Athara Sooraj Ke Paudhe‘ by Ramesh Bakshi, 27 Down is regarded by critics and film scholars as a landmark film of Hindi New Wave cinema; but it remains a relatively under-appreciated gem in comparison to the classic ‘art’ films of Shyam Benegal and Govind Nihalani. One of the reasons could be the unfortunate demise of its director Awtar Krishna Kaul, who drowned in an accident the day his sole film won the National Award for Best Feature Film in Hindi. The brilliant cinematography in Black and White by Apurba Kishore Bir also won the National Award. Bir, an FTII graduate, was merely 22 years old when he shot the film. 75% of the film has been shot using a hand-held camera, inspired by The Battle of Algiers (1966), and is still considered a masterclass in cinematography.

With such a promising debut that shows us glimpses of Awtar Kaul’s immense talent and refined sensibilities, one can only imagine the quality of films he would have delivered had he been alive. His film 27 Down also leaves us with the same thought: What if…

Timothèe Chalamet Upcoming Movies: What's Next For The Young Actor