Timothèe Chalamet Upcoming Movies: What’s Next For The Young Actor

2020’s Latest Curse? No New Timothèe Chalamet Movies. This year has certainly taken a toll on all of us. The obvious culprit of our collective anxiety is the global pandemic. But just when you thought we may be nearing the end of this crazy-ass apocalyptic year, we are dealt with another blow. The most recent piece of bad news is that Chalamet-draught will go on just a little bit longer as many of his projects in 2020 and beyond have been cast into doubt.

The 24-year-old, Academy Award Nominee, was last seen in standout roles in Little Women (2019) and The Last King (2019). He was set to make his return to the silver screen with several huge performances, namely The French Dispatch and Dune, with fall and winter releases, respectively. But looks like we are going to have our very first Timmy-less year ever since he made his debut in 2014.

While we fervently await the day that The Beautiful Boy (2018) star gets the theatrical release of Denis Villenevue’s star studded adaptation of the Frank Herbert’s landmark science fiction epic. He still remains part of the insanely long list of names in upcoming films. Let’s take a look at all the movies starring Timothèe Chalamet, that will come to release at some point or another in next year or so. 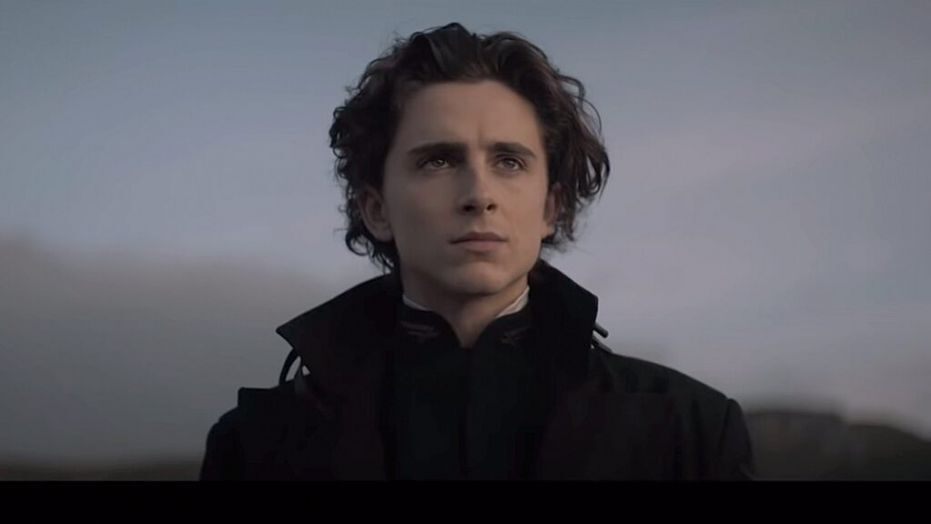 If we all didn’t live in a world marred by the worst pandemic of the modern history, we would be getting our boots on to rush to the theatres to watch Timothèe Chalamet follow in the footsteps of Kyle MacLachlan and take on the role of Paul Atreides in Denis Villeneuve’s big budget adaptation of “Dune”, (or at least first part of the epic novel). However, in our real world, we will have to wait patiently until at least late 2021 to see the son of Duke Leto Atreides (Oscar Isaac) as he, his father, mother, and the rest of his clan travel to Arrakis, a planet rich in “the spice” as well as dangers that await.

Principal photography began back in March 2019 and wrapped up in July 2019. Additional shooting took place in August 2020, just a few months before the film’s original release date. Speaking of which, the initial theatrical release date was November 20, 2020, the extended weekend of Thanksgiving holiday, before moving to December 18, 2020. In early October 2020, news broke that Dune won’t be released until October 1, 2021. Let’s just hope there aren’t any further changes. 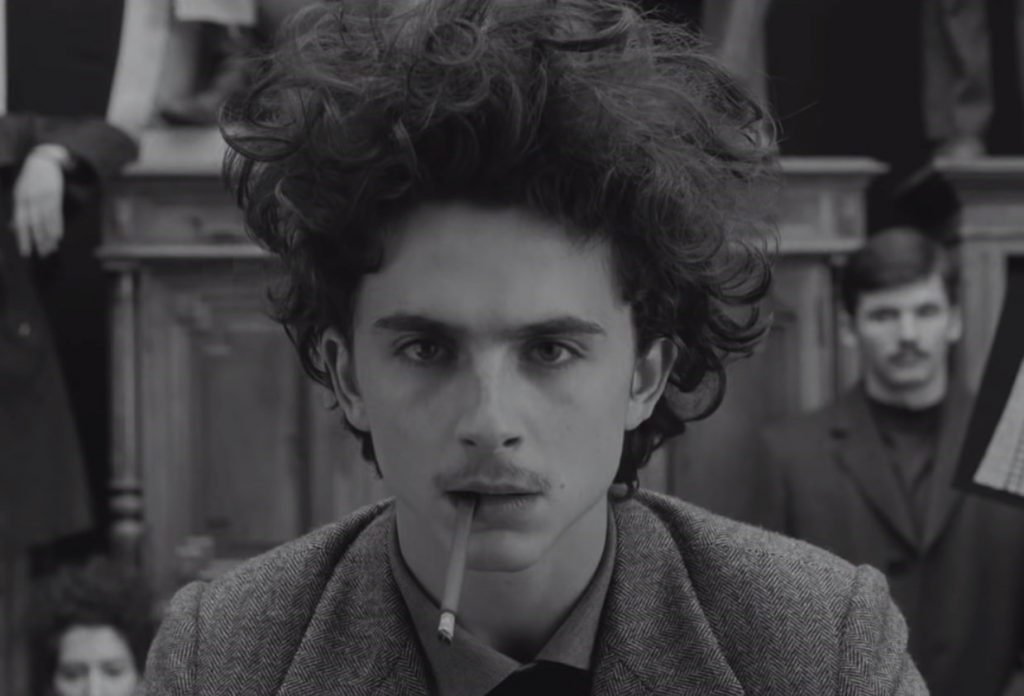 Fans around the world waited with a bated breath to see Timothèe Chalamet finally team up with eccentric style filmmaker Wes Anderson in the anthological film, “The French Dispatch” (Full Title: The French Dispatch of the Liberty, Kansas Evening Sun). The film focuses on French bureau of a fictional newspaper, loosely based on The New Yorker. The film is split into 4 segments (the staff of the French Dispatch..and three other stories that are being prepared for the newspaper). Chalamet will be seen as Zeffirelli, a revolutionary student with a look that will make all his fans swooning over him. Not much is known about his role, other than that it requires him to adorn a killer trimmed mustache and a wild hairdo.

The French Dispatch was originally slated for a theatre wide release on July 24, 2020. Due to the global pandemic, release date was pulled from schedule and given a new (second) release date of October 16, 2020. However Wes Anderson’s film has been once again pulled back from the schedule and no new release date has been attached to the project. While there is no definite date or schedule provided for theatrical release, there are murmurs that “The French Dispatch” could possibly premiere at Cannes Film Festival in 2021.

If you thought “Dune” and “The French Dispatch” were the big budget, star studded ensemble films, wait till you hear the cast line up of the new Timothèe Chalamet film, Don’t Look Up. The upcoming Netflix comedy, directed by Adam McKay, boasts of some of the biggest and brightest stars of Hollywood, including the newcomers as well as well-established stars. Chalamet is going to be part of multi starrer ensemble cast with names like Leonardo DiCaprio, Jennifer Lawrence, Meryl Streep, Jonah Hill, Kid Cudi, Arriana Grande, Himesh Patel, Matthew Perry and so many more, in the upcoming new project. The story revolves around two “low-level” astronomers, reportedly to be played by DiCaprio and Lawrence, who discover a giant asteroid is on a collision course with Earth.

Related to Timothèe Chalamet: The Last King (2019): An Epic Entrancement

Details of roles played by other cast members on the film is not available yet. We do not have any information on the production schedule or any potential release date. But the thing that we do know for certain for is that the director and the cast of this film have a certain track record to produce award contenders, so it will be worth our wait.

Back in January 2020, it was announced that Timothèe Chalamet has been signed on to play the iconic musician, Bob Dylan, in the tentatively titled biopic “Going Electric.” Bob Dylan, a man formerly known as Robert Zimmerman, was known for his signature brand of music that was anything but electric. Until 1965 Newport Folk Festival when he decided to strum an electric guitar over his trusty acoustic one. This historic moment, which shocked thousands of fans and music world in general, was going to be the focus of the Chalamet’s upcoming biopic based on the Rock and Roll Hall of Famer.

The film is being produced by Bob Dylan’s longtime manager, Jeff Rosen and some other major Hollywood producers. James Mangold, who already has another famous musician’s biopic, Walk The Line (2005) to his credit has been on board to direct the film. As per the latest news, less than 48 hours ago, “Going Electric” has been put on hold due to the ongoing social distancing restrictions imposed as a result of coronavirus. According to Mangold, “I don’t think it’s dead, but it’s a tough one to pull off in COVID-19 era, because it’s all in small clubs with lots of extras in period costumes, so you’ve got lots of hair and make-up.”

Timothèe Chalamet was already a rising star in Hollywood when he was cast in Luca Guadagnino’s coming-of-age romantic drama, Call Me By Your Name (2017). His role as Elio Perlman, a young and naive adolescent in an undying romance with Armie Hammer’s Oliver made him one of the biggest stars in younger generation of Hollywood and propelled him into worldwide fame and superstardom. Back in April 2020, Guadagnino shared details of a project in pipeline with Italian newspaper La Repubblica that Chalamet and Hammer will reunite for the sequel, “Find Me”, which will tell the story 10 years after their summer of love.

Related to Timothèe Chalamet: Call Me By Your Name (2017): A Ripe Celebration of Love

For those who are unaware, “Call Me By Your Name” and “Find Me” are based on a pair of novels of the same name written by Egyptian-American Andrè Aciman.  The second novel was published in 2019. There are no details when this project will kickstart but one of the stars from the 2017 drama, Hammer told in his October 2020 interview “that some time still needs to pass before it’s released so that the first movie can breathe and so that the actors can age into the roles”. So looks like we have a long wait of another seven or eight years to see the two lovers’ story continue.

Along with the movie projects in pipeline, Timothée Chalamet, also has a stage production aligned to open as soon the pandemic restrictions are eased. No stranger to live theatre audience, Chalamet has appeared in multiple plays in New York City, however, he is yet to take the stage in London, England’s famed theatre. “4,000 Miles” is written by Amy Herzog and Eileen Atkins is also part of the cast. The production, set to be staged at the Old Vic in London, will see Chalamet play a 21-year-old Midwesterner who shows up unexpectedly at his grandmother’s doorstep in the Greenwich Village after the death of a friend. The show will go on once the Old Vic opens its doors however as of now, there is no word on when that will happen.

Possessor [2020]: 'BFI-LFF' Review - A fine future addition to the realm of cult cinema

Timothèe Chalamet Upcoming Movies: What’s Next For The Young Actor