“The Black Phone” marks a triple reunion between Scott Derrickson, co-writer Robert Cargill, and star Ethan Hawke. It comes about 10 years after their last project, “Sinister”, which remains one of the creepiest movie-watching experiences of my life. I went into their latest without having seen the trailer or even reading the film’s plot. I would suggest people against that since this is not an all-and-out horror movie, but one that mixes familiar story beats into a semi-paranormal serial murderer flick.

A young boy named Finney, (Mason Thames) who is often bullied at school, is abducted by a child murderer (Ethan Hawke) only to discover that his prison contains a disconnected black phone which receives phone calls from “The Grabber’s” previous victims. The kid’s younger sister, Gwen (Madelina McGraw in a star-making performance), provides psychic powers that supply clues to the murderer’s ambiguous identity, giving the screenplay ways of playing with its supernatural elements.

Derrickson in the movie’s first act takes his time in setting up the family dynamics while simultaneously expanding upon the world-building and era the film is set in. This looks and feels like a movie made in the late 70s! We first see kids protect each other from bullies while school staff is absent during spontaneous adolescent brawls. Later, Gwen leads the police investigation while past victims communicate with Finney as he constantly tries escaping the clutches of “The Grabber”. Much of the movie takes place in that claustrophobic aforementioned dungeon: a soundproofed basement with a dirty mattress, a high window, and the black phone.

Literary fans of the horror genre might be quick to associate the black balloons – that seem to be there just to draw attention to writer Joe Hill’s association with father Stephen King, and the red balloons in the latter’s “IT”. Hill wrote this as a short story and later even helped Derrickson in the creative process that went behind the film. Like a lot of his previous films, especially “The Exorcism of Emily Rose”, here too we get a lot of genre meshing. There’s also the creepy celluloid surveillance vibe we got in “Sinister” here – one of the smartest creative choices in an otherwise straightforward conventional thriller. 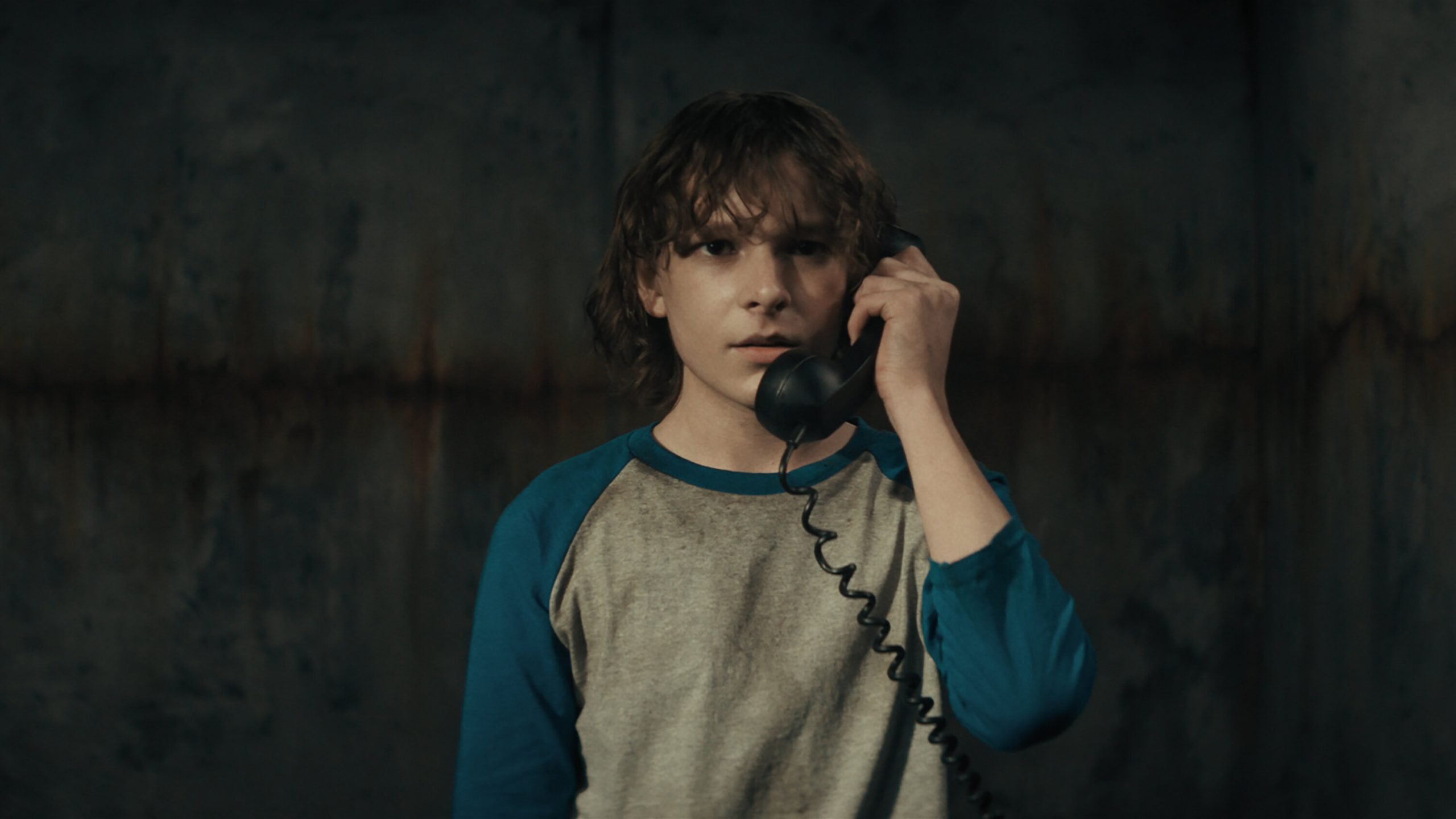 The 8mm-stock detour here is almost seamlessly woven into dream sequences that often hinder the pacing of even the most accomplished horror flicks. The upbeat ’70s soundtrack is often interrupted by a bassy and resonant score that reverberates in your bones as it sinks into your eardrums, almost as if the Grabber’s basement is encroaching upon your very own conscience. That’s what drives the scares in this film; this isn’t a film to expect cheap jumpscares from. All of this combined gives the film a nostalgic feel, reminiscent of vintage photographs and the era of striped baby tees, flared jeans, and “The Texas Chain Saw Massacre” playing in theaters.

The standout here remains Ethan Hawke, an actor of unbounded on-screen talent, who takes on a rather uncharacteristic role as a crazed masked villain. We never really get to know his true intentions, just implications of how he’s a pedophilic and sadistic serial killer who abducts children on their way out from school. The screenplay deliberately uses repetition throughout its first half to set up the pace for the film’s crowd-pleasing (yes, you heard that right) final act. It’s all meticulously put on display, yet the movie never lifts above its conventional standards. I get that it’s not important for every other film in the genre to be an “elevated horror”, but with the use of that very term, critics and fans both tend to undermine an entire genre for its creative output.

Even if I refrain from using that term, that doesn’t mean this film is poorly put together. For instance, through “The Grabber’s” always differently-appearing mask, we see different parts of his face that reveal different aspects of his mysterious personality. There’s almost Greek-like iconic imagery to the scenes he’s in, providing the actor to bring in various theatrical aspects he’s familiar with, into his character’s menacing persona. It’s touches like these that make the film consistently engaging, almost making you forget of its frustrating loopholes.

“The Black Phone” remains one of Scott Derrickson’s weaker films; I expected it to land a few more moments of genuine horror. But given the film’s marketing and the 70s nostalgia it’s treading on in a generation obsessed with old remakes and shows like “Stranger Things”, it’s bound to satisfy most of its target audience.

Where to watch The Black Phone