If there has ever been an instance of a narrative cul-de-sac that revives itself only through brute force, it would fall short in front of the oddly tortuous storyline of Vishal Furia’s ZEE5 feature, Forensic (2022). The remake of a Malayalam film of the same name, this crime thriller is quite keen on keeping you at the edge of your seats by often blurring the lines between forensic science and forensic science-fiction (if such a genre can be defined).

In this whodunnit, which employs age-old story-telling techniques borrowed from both Hollywood psychological horrors and Bollywood crime dramas alike, jump scares and action-packed car chases are handed out in abundance. The lack of novelty in execution could only be compensated by the plot, so the plot does go all the way to make and break itself over and over again, and keeps you guessing till the very end (hopes to, at least). The runtime of two hours can only be justified as a desperate attempt to keep the viewer as further away from the ending as possible.

The majority of the plotline thrives on filler drama—romance, family conflicts, and misleading decoys—all of which seem to be a preparation for the grandiose twist in the tail. There are also glimpses of gender stereotyping and departmental bureaucracy—elements that are not uncommon in Indian crime dramas, especially with a female lead. Sitting through the film, one might often get a feeling of being inside a Dan Brown novel, where, even though you might have a hunch of what is about to happen, you eagerly wait for the author to break it to you.

A series of gruesome child murders plagues the quiet hill-town of Mussoorie, and a female sub-inspector (Radhika Apte) is assigned the lead role for the investigation. Often commingling scenes from the past and present, the viewer is presented with a foreboding of her dark past, her struggles with personal loss, and her ideas of right and wrong. To make matters worse, her former lover— an easy-going wunderkind named Johnny (Vikrant Massey)— is assigned as the forensic scientist for the case. It is evident that this figure is a harbinger of the ghastly memories she wishes to keep buried.

Apte’s role as a criminal investigator is not one that is devoid of expectations. She has made quite a mark of her own in the world of crime thrillers and seems to be cut out for the uniform. The somber, troubled, no-nonsense officer Megha might often remind us of Sartaj Singh (Saif Ali Khan) in the 2018 series Sacred Games. Her ease of execution when it comes to chase sequences and action scenes is certainly worthy of applause. But the same cannot be said for her portrayal of tense moments in the film, which are often overshadowed by a misplaced edginess. 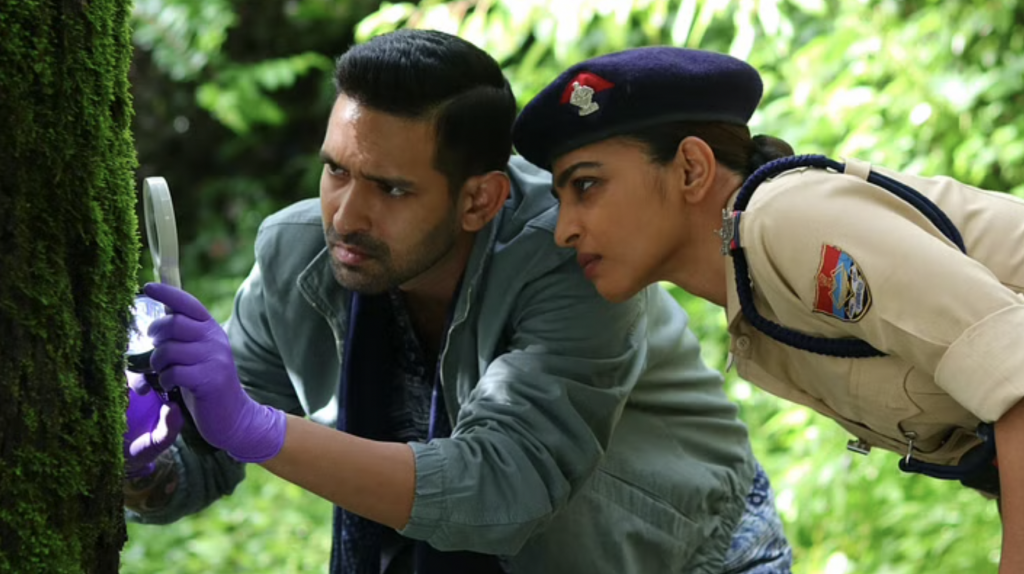 To maintain the tonality of the film, Massey’s character Johnny oscillates between a farsighted prodigy and a comic relief. He is depicted as a forensic superhero—a Batman with an impressive lab, but a not-so-impressive Batmobile. The investigation sequences have a flavor of Sue Vertue’s modern-day Sherlock, replete with humorous eccentricity and zoomed-in shots of evidence shreds. It is discernible that a lot of research has gone into the preparation for the role. Massey in an interview with a publication mentioned that he had spent a considerable amount of time with a team of forensics who was invited onboard for the film.

There is a quality of Hollywood slasher thrillers that haunts a film that opens with a young boy butchering his family to death out of jealousy. Then, it also goes on to recount the murder of little girls stabbed multiple times to death by a psychopathic weapon. In another scene, we see Johnny mutilating a corpse-like a madman, to come to the conclusion that the criminal is left-handed. It seems as if Vishal Furia has a knack for mangling human bodies like Rohit Shetty has an obsession with blowing up cars. But then, there is the extended and quirky pursuit-evasion scene as well (though fortunately, none of the cars explode).

The portmanteau of themes that appear in the film, including psychological trauma and child abuse, are mostly treated in a factual manner and never delved too deep into. A history of child serial killers is dug out at one point to support a case. All these disconcerting facts seem to be maneuvered to fuel the flames of intrigue and suspense and leave little room for thoughts. One might feel inclined to compare it with Hollywood thrillers depicting child antagonists such as Orphan (2009) or Case 39 (2009).

Rohit Roy and Prachi Desai’s performances were also noteworthy, in spite of their limited on-screen appearance. In a cameo, as Johnny’s mentor and the greatest forensic scientist in the country, Narendra Gupta appears, who played the role of Doctor Salunkhe in the longest-running crime drama show, CID, aired by Sony Television Network. It is indeed a fulfilling moment for the fans of traditional television.

The film celebrates the technological advancements in forensic science and features novel criminal investigation techniques like Forensic DNA Phenotyping (FDP). Acquiring a factual inventory of child criminology might be a good reason to watch the film. Another might be the attempt at the reversal of gender roles. But the best route would be to abandon all reason and watch it just for the laughs and the jolts that it serves.