Sherdil – The Pilibhit Saga (2022) Review: Last year around this time only, Amit V. Masurkar’s Sherni was released on Amazon Prime Video. Specifically, the date was 18 June 2021. Sherni was a social drama that satirized bureaucratic lethargy, state corruption, and moral complexities involved in wildlife conservation. The conflict is popularly branded as one of man vs animal, for it is the animal that invades human settlements across its habitat and terrorizes. This is a basic understanding of the conflict, and it serves political interests. But being the apex predator running the planet like a factory for the preservation of humanity and humanity only, we, as humans, are no longer in conflict with other species. We are only in conflict with ourselves.

Sherni not only establishes this as a fact without diluting its gravity, but it also shows that compassion and honesty are the only things required for sustainable living. It is only our self-interest that has normalized apathy and has made the world so congested. Now when we read a piece of news informing us how a leopard got into an accident on a highway and escaped bleeding after getting caught under the car’s bonnet briefly, we fail to treat it as an isolated incident of a wild animal losing track of its path and mistakenly entering human habitat. We all have become aware, to different degrees, of how we have pushed animals to the margins, and they are merely falling on this side of the border to save themselves from falling into an insurmountable ditch. Something that threatens the existence of their entire species. Sherni did not lead us to the light, but it managed to point in the direction of light even if we fail to see how far the opening of this long narrow abyss is.

Related to Sherdil – The Pilibhit Saga: The Black Phone [2022] Review – Almost delivers on the Klutzy hi-jinks of the genre

A callback to Sherni here is vital because that film is an important reference point for Sherdil. The motivations and intent of Sherdil make it an important film. It is a set of arguments made in this discourse of ours. Sherdil follows Gangaram, played by Pankaj Tripathi, who is the head of a remote and marginalized village beside a deep forest with a tiger reserve, Jhundaao. The people of Jhundaao are cut off from the network. They do not appear on the map, and despite braving natural calamities that have left them in ruins, they have received neither attention nor compensation from the state.

Their poverty is artificial, for it is built by society’s ignorance. Jhundaao is now suffering from a new problem: animals are leaving the forest to enter fields and, hence, are destroying crops. This has culminated in social depression claiming the lives of farmers. Gangaram wishes to alleviate the poverty experienced by his people and, therefore, is going from office to office seeking relief from the government. Somewhere in this bureaucratic nightmare, he comes across the scheme that compensates victims of tiger attacks. He decides to get hunted down by a tiger so that his village can receive monetary compensation and escape deprivation. 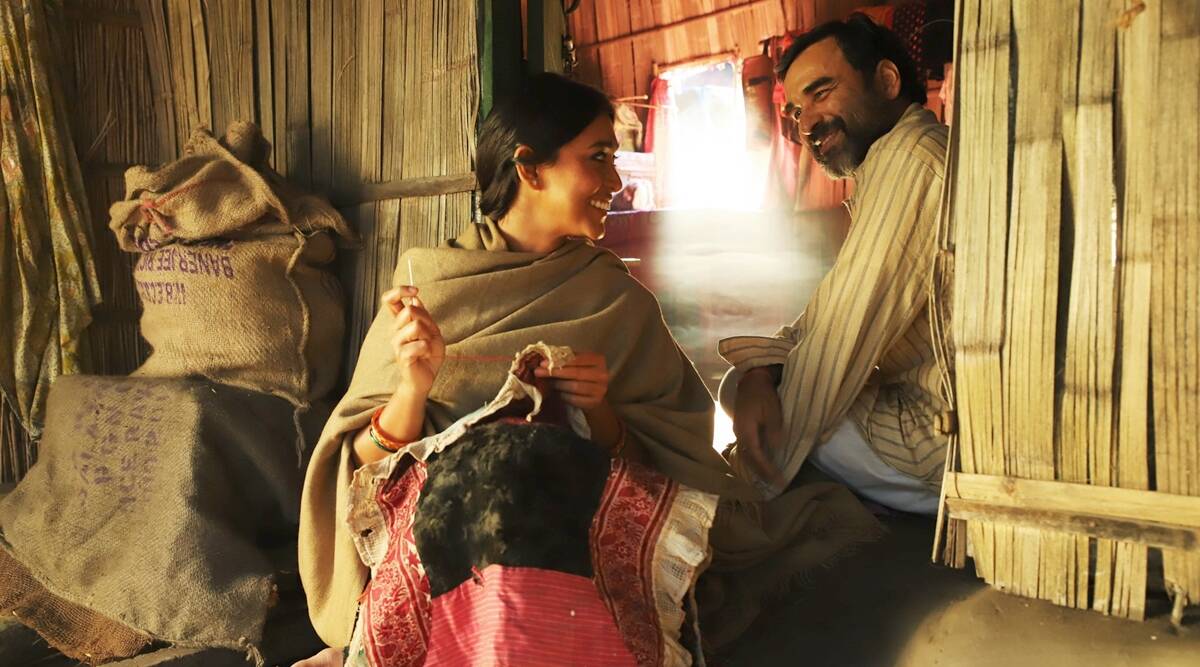 The plot promises plentiful satiric humor. The carefully constructed location and characters allow room for relevant sociopolitical commentary. In the same vein as Sherni, the argument is against the institutional apparatus and for both the preservation of man and animal. Unlike Sherni, realism is only reserved for the atmosphere, while the characters are made to act as if they are in a burlesque. And that’s okay because it doesn’t work against the film. In subtle didactic ways, Sherdil communicates the system’s inefficiencies and criticizes people’s hypocrisy. The arguments made are both narrow and broad. They question the whole of humanity on an existential level and the micro traditions of civil society.

Even though it doesn’t always land in a realistic sense, it is fine as long as you are having fun. And honestly, you are bound to have fun because Pankaj Tripathi does what he is admired for. The innocent quirks and nuances of his body language fill the silent spaces of the frame and elevate the entire audiovisual appeal of the film. He is still operating in a familiar space, doing a stereotypical Pankaj Tripathi act, yet there is a charm in how he encapsulates Gangaram. Most definitely, Pankaj Tripathi is enough reason to watch Sherdil. Sayani Gupta is an able actor otherwise, but an utter lack of preparation is quite evident in her performance. The other relevant mention is that Neeraj Kabi fares well in his limited appearance. However, him repeating ‘Janaab’ to call people because he is a Muslim character is idiotic. Character writing is obtuse in Sherdil.

Also, Read – A Man of Integrity (2017) Review – An Intense Slow-Burn Thriller and a Scathing Critique of Post-Capitalist Society

Sherdil runs along a safe trajectory and makes good use of the opportunity to express social and individual crises. But it appears it either did not know or completely forgot how to resolve the film. Succumbing to the phony monologue fatigue, Sherdil rewards Tripathi with considerable screentime and makes him the representative of the poor and the neglected. The nuance gets lost, and the film becomes selfish. It assumes a moral position and begins patronizing everyone in the audience, invalidating the complexity of the problem and perhaps the problem itself.

Suddenly, the film becomes about something particular and simplistic and finds an equally simplistic solution. A series of escapist choices are made so the filmmaker can make a metatextual comment on the desolate attribute of social phenomena. Mockery is a challenge as an art form, for when it mocks only what lies on the surface above the ground and not the roots themselves, it becomes analogous to condescension. In the end, you come out disappointed in the wastage of potential.

Do I recommend Sherdil? Absolutely, yes. It is not for the subject matter alone but also for the sake of its first two acts, which are urgent and entertaining. But in addition to that, you will be surprised to find good music in the film. The compositions of Poet Kabir and Gulzar are turned into soulful songs by Santanu Moitra. There is an acute dearth of poetry in Hindi commercial cinema, and Sherdil comes like rain on barren land.