Back in 2020, Black Mirror creator Charlie Brooker said that he’s not working on another season of the show because reality is way too dystopian. This applies to any work of art from any genre, especially satire, that is aiming to critique the times that we are living in right now. How can you possibly top a celebrity correlating their cousin’s enlarged testicles with the COVID vaccine or elected and selected ministers of a country back cow urine, cow dung, and other herbal “medicines” instead of promoting COVID safety protocols? Well, the simple, albeit tough, answer is that if reality is going hard in terms of crazy behavior, your satire has to go harder. And that’s exactly what Bad Luck Banging Or Loony Porn (2021) does.

Written and directed by Radu Jude, Bad Luck Banging Or Loony Porn tells the story of Emi Cilibiu (Karia Pascariu), a history teacher at a prominent Romanian secondary school whose sex tape with her husband Eugen (Stefan Steel) has been leaked on the internet. This has obviously led to some concerns amongst the parents of the students studying under her. And the Headmistress (Claudia Ieremia) has called for a parent-teacher meeting to sort things out. The narrative is broken into three acts with widely varying tones. The first act passively observes Emi as she travels around the city, conversing with her husband about whether the sex tape has been taken down, and waiting for the inevitable meeting to happen. The second act plays out like a documentary, painting a vivid image of Romania. And the third act is a war of words between Emi and the parents that provide pay-offs to everything that’s set up in the first two acts. But why take this approach? To provide context.

Going by Jude’s writing skills, he could have set the entire movie in that school and made it all about the PTA meeting only. There could have been brief interludes with the characters contemplating their decisions, probably showing their hypocritical side when no one is watching, and then proceeding to partake in the moral policing of Emi. However, that would’ve separated the fictional story from the reality of Romania and that’s clearly not something that Jude wants to do. 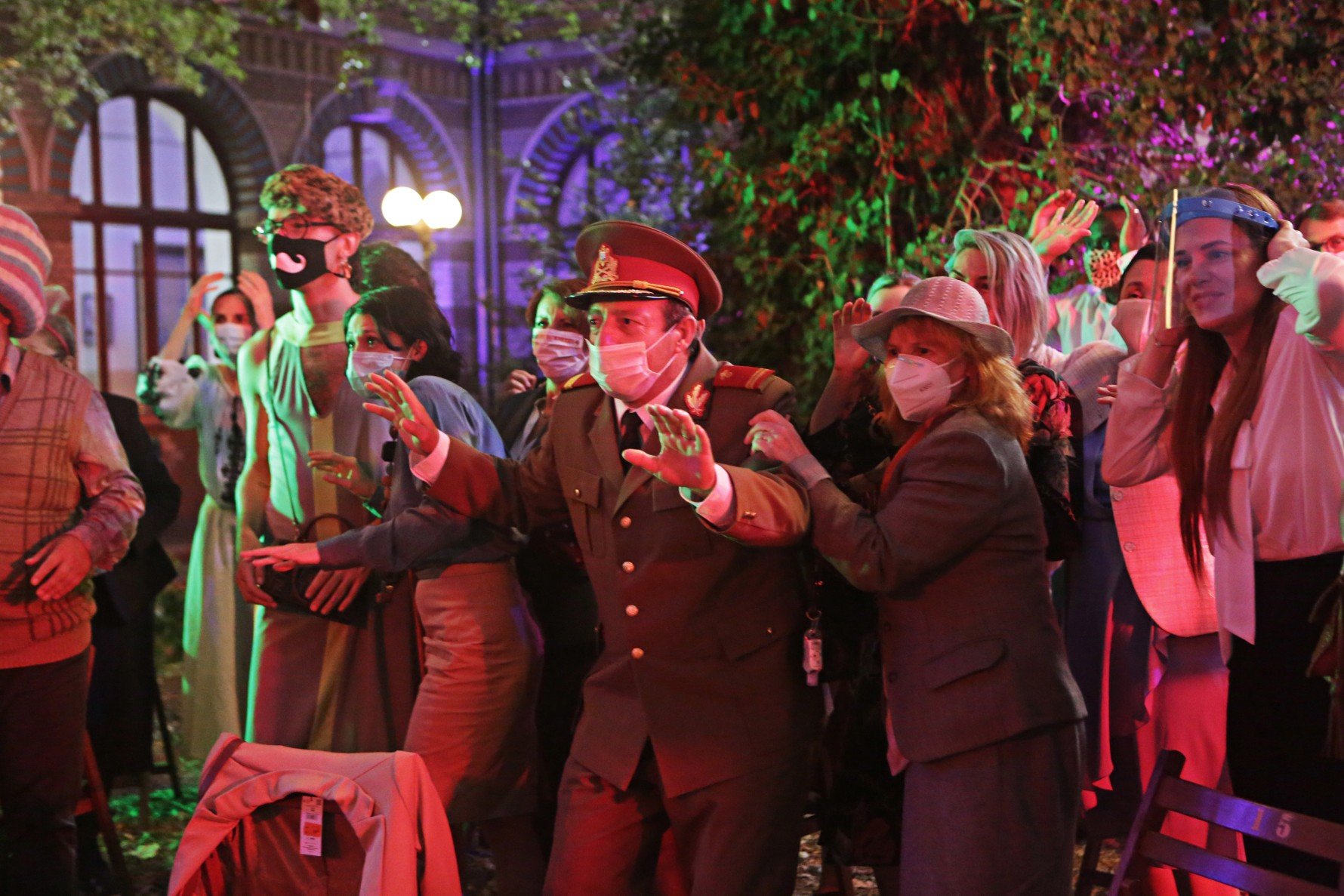 Now, it is difficult to say for certain, because the movie is so smart about its meta-commentary, but it looks like at least ninety percent of the footage of Emi going around the city isn’t staged. Karia is aware of the camera and is playing her part. But apart from a few interactive instances, those are real people and those are real places, reflecting the sexist, nationalist, and consumerist shades of the country. It will feel a little jarring since the unmotivated movements of the camera (or maybe it is all motivated) isn’t something we are used to seeing. And that’s just one of the least challenging aspects of viewing Bad Luck Banging or Loony Porn.

On the surface, the second act will look disjointed. Because it is a montage of apparently disconnected pieces of information. There are archival videos, accompanied by text, of fascism, white men posing with naked black women, the military’s regressive actions, a blonde joke where a man dressed as a cow chases a naked blonde woman and ends with the woman saying that she’ll rather have a calf than a heart-attack, a customer throwing money at a cashier, the Romanian Orthodox church’s proximity to dictatorships and how it kept its doors closed when revolutionaries were being, and children being the political prisoners of their prisoners.

Then it shows present-day footage of the close proximity in which funeral home and a hospital exists, data on domestic violence and rape, a racist cartoon, examples of how people are contributing to global warming, a female anchor being mansplained by her male counterpart, justification of animal slaughter, and the list goes on and on. But it’s properly tied together by one anecdote which starts off by talking about the tale of Perseus killing Medusa by taking Athena’s advice to look at her only through the reflection on her shield. Which is interpreted as humanity’s inability to look at the truth because they will be too petrified by it. That’s where cinema comes in, acting like Athena’s shield, showing only a reflection of the horrifying times we are living in now, thereby making the truth digestible.

That brings us to arguably the most important part of the movie: the third act. Without spoiling anything, everything from the moment Emi enters the school premises to the point she reaches one of her conclusions, is a masterclass in writing, editing, direction, cinematography, sound design, production design, costume design, and acting. It does the mind-boggling task of making sense of everything you have seen prior to that act and establishing the characteristics of every single parent sitting there and bashing Emi’s image. 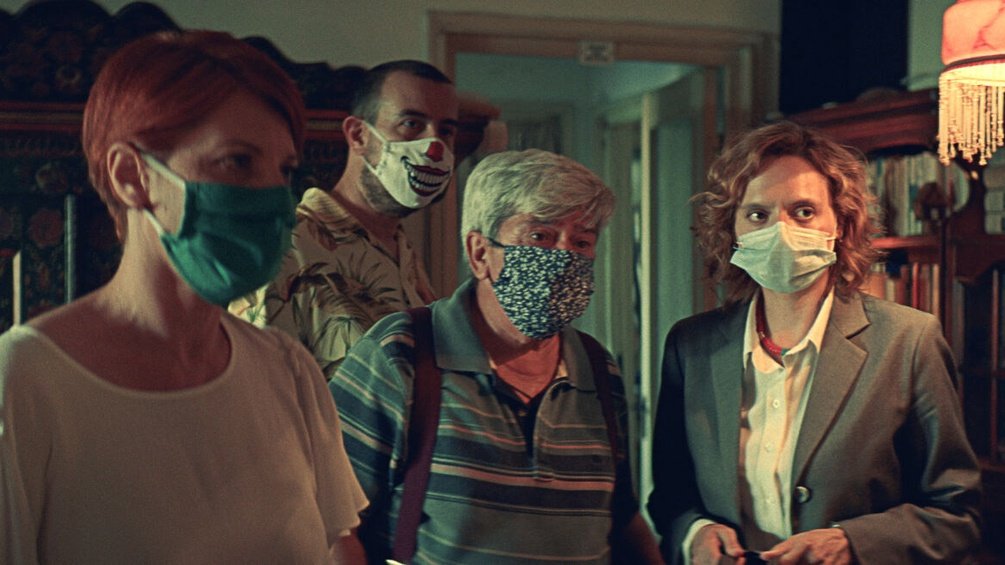 The dialogue overlaps in crisp and sometimes hilarious and sometimes blood-boiling ways, which is indicative of Jude’s writing skills. But if it wasn’t for Catalin Cristutiu’s editing and Dana Bunescu sound design, a lot of the details would’ve gone under the radar. And of course, every single actor, even the janitor who comes to clean the statue, thereby providing some breathing room during the scene and hinting at what the school prioritizes, brings their A-game to the table, thereby making one of the endings the most cathartic scene ever put to film.

All that said, you don’t have to be Romanian or know about Romanian history to realize what’s being done to Emi and how it is commenting on the larger issues in that country. If you have any amount of empathy in your body and if you are even a little aware of what’s happening in your backyard, you’ll understand the state of women in society. Every single day they are subjected to various forms of character assassination for things they do privately. So, you can only imagine what happens when they speak up on topics such as religion, sexism, politics, etc. publicly.

Patriarchy is so deep-rooted in our everyday vocabulary that often people don’t even know the dangerous precedents they are setting for the future generations by not pushing for things like sex education, in-depth historical research, access to literature, and more. These are the same future generations that they are using as an excuse to do all kinds of moral policing while failing to live up to the moral standards that they want others to abide by. And Jude knows that there’s no way to cover this mess coherently and that there’s no all-encompassing message to give at the end of it. Hence, he embraces the chaos of humanity completely and goes for broke in his final display of rage against the system.