Korean film-maker Yeon Sang-ho’s three animated feature films – “King of Pigs”, “The Fake”, and “Seoul Station” – were highly entertaining ones, loaded with plenty of social messages. The premise of his animated features usually explores non-traditional genres, less prevalent in the South Korean film industry. It would certainly  remind us of the works of acclaimed Korean auteur Bong Joon-ho. But, unlike Bong’s movies, Yeon’s animated films aren’t as profound or subtle in their indictment of class structures or other timely themes. With his first live-action movie Train to Busan (2016), director Yeon Sang-ho has ventured into a wholly entertaining premise of rapidly spreading zombie infection inside a high-speed KTX train, while also clamorously shoving in sociopolitical messages. Yeon may not have achieved the mastery of Bong Joon-ho in mixing up the genres or in building really intricate characters, although he makes up for that through his flawless technical skills and in visualizing the taut set pieces.

“Train to Busan” was chosen for the midnight screening at this year’s Cannes Film Festival, gaining instant critical acclaim and went on to become a box-office sensation in its homeland. The idea for the movie’s premise started with Yeon’s animated zombie film “Seoul Station” (2015), which was actually set a day before the events unfurling in “Train to Busan”. Considering, the frenzy for watching the athletic, contorting, flesh-eating subhumans called ‘Zombies’, Yeon was approached to make a live-action film and has certainly delivered the goods. The movie opens with a truck passing through a toll booth, turned into a quarantine zone. The truck driver evidently hates the guys in hazmat suits and certainly doesn’t know the severity of quarantine situation. In his distracted mode, while reaching for the mobile phone, the driver runs over a deer. He drives off as the camera slowly moves to show the deer staggering back to life with a set of glassy eyes. What is the significance of this scene? Does it say something about the origin of virus or suggest that the deer is ‘patient zero’? It’s not clear, although by looking at the guys in hazmat suits, it’s alleged that the government is totally behind the spreading of the virus.

It is good to see a fund manager protagonist in a zombie film rather than ‘annoyingly righteous’ savior. The first time we see him –Seok-woo (Yong Goo) – the guy is looking at pictures of thousands of dead fish. By the look on his face, it is evident that either he or his company is involved in something big & ugly. After showing his social hierarchy through harsh words to an employee, Seok-woo goes to his posh condo, where his neglected daughter Soo-an (Kim Soo-an) and old mother lives. The workaholic dad is divorced and the girl celebrating her 10th birthday yearns so much for her parents to get back together. As the birthday wish, Soo-an requests her self-centered dad to take her to Busan to see mom. Seok Woo replies by saying few excuses but decides to grant the request after looking at the daughter’s failed song recital video, which he was supposed to attend that evening. The early morning trip to Seoul station is punctuated with bad omens, but the father & daughter gets settled in their seats. There’s a brief introduction to other vital characters in the trip, including macho Sang-Hwa (Ma Dong-Seok) and his pregnant wife Seong-kyeong (Jeong Yu-mi), two senior citizen sisters — Jong-gil (Park Myeong-sin) and In-gil (Ye Soo-jeong), naïve teenagers Young-guk (Choi Woo-sik), and Jin-hee (Ahn So-hee) – part of a school baseball team, and the despicable high-class rail-line president Yong-seok (Kim Ee-seong). Just as the train was about to leave the platform, an infected girl jumps into the train and Soo-an sees someone pouncing upon guard on the platform. The rest, as the say, is the race for survival.

The film’s scare tactics and action set-pieces are among the most inventive in zombie films. It is good to see writer/director Yeon Sang-ho not spending to explain the virus’ origination or what it does to humans. The little girl knows what a zombie is and so do others. They are horrified by the turn of events, but not very much surprised. This allows the director to focus fully on the on-screen action and amalgamation of a different genre rather than giving unwanted unscientific explanations. The action becomes more relishing as the motley crew of survivors move through compartments, crawling with undead, by using mobile phones, baseball bats and with the aid of tunnels (zombies in the film are attracted to loud sounds and gets hungry only when they directly look at their prey). Also, the set-pieces, set aboard the fast-moving express train are more thrilling than the grander ones, set in exterior locations, where Yeon uses CGI and aerial shots. While the former, contained atmosphere allows the Koreans to do what they do best, the later grandiose scenes evoke the popcorn entertainment of Hollywood films. The commendable aspect of interior action scenes hinges on the way director Yeon uses shades and opening & closing of doors. Towards the end of its second act, when the narrative pushes into Stephen King territory (telling ‘man is the cruelest animal’), the prospect of opening a compartment door becomes as satisfactory as the closing of doors. Like many of Hollywood disaster films, “Train to Busan” uses the disaster event as the backdrop for restoring back the nuclear family, but thankfully it lacks the annoyingly cocky attitude of American movie characters. 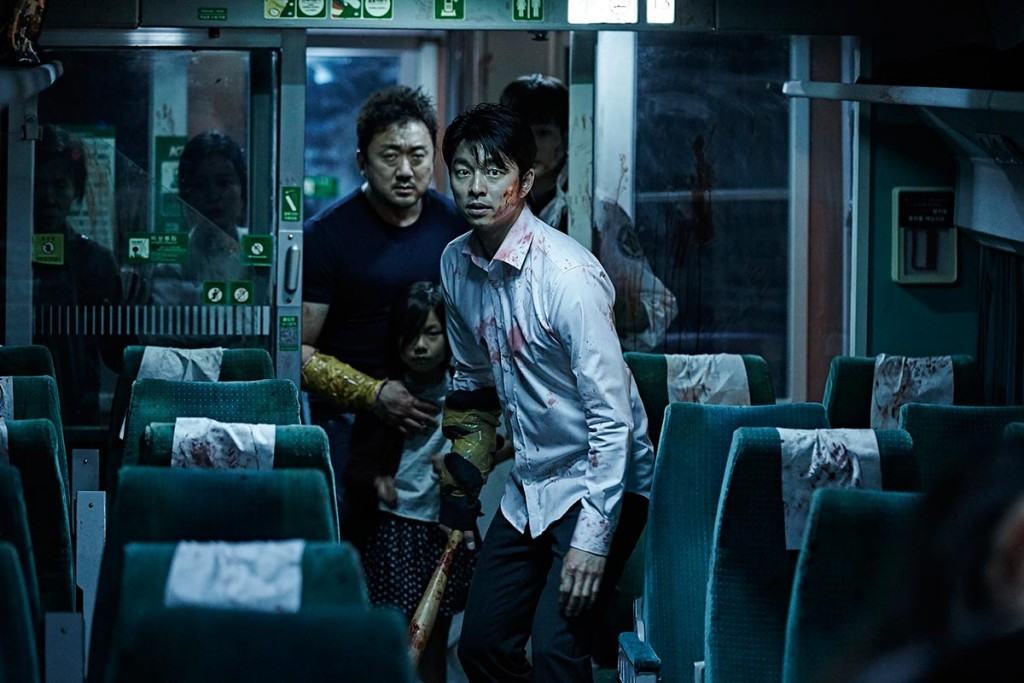 But, what stops this film from becoming the best zombie survival film is its stubborn devotion to formula. The character seems to be going through a transformation, but they never arise from being genre types. Seok-woo transforms from being a self-centered dad cliché to self-sacrificing dad cliché or Sang-hwa transforms from cliched giant to cliched ‘gentle’ giant. Of course, audience seeking energetic zombie film won’t bother about these stock genre types or unsubtle nature in establishing the messages, but “Train to Busan” certainly can’t be acclaimed for boasting rich, intricate characters or sociopolitical content. By hardly thrusting the messages under the narrative’s best circumstances, Yeon Sang-ho loses the tight emotional focus he showcased in the second-act. The TV screens inside the train informing passengers what’s happening across the country, telling everything is under control and dubbing the zombie outbreak as ‘riots’ is a clever inclusion. And so is the government asking public to not spread unwanted rumors (which is alleged to be a reference to government’s response to the outbreak of MERS in 2015). But, the entire third act is devoted to noisy, contrived CGI sequences and the cartoonish villainy of the upper-class executive. The helping hand of homeless guy character and the pushing off nature of upper class character seems to be lamenting for the Korean government’s blind embrace of the capitalistic values, which only comes off as a redundant, uninvolving, overt reference (especially when you think how this film’s rights are sold and will be sold for suitably altered remakes in Western capitalist countries. Who knows this film could even be a calling card for Yeon Sang-ho to Hollywood). On an emotional level, towards the end, Yeon increasingly operates on a level to Western counterparts that there is no heart involved in the proceedings.

Thanks to the distinctive action tropes, “Train to Busan” (118 minutes) remains as a wildly entertaining ‘zombie’ film, despite possessing typecast characters and lacking good performances. It is part exhilarating and part exhausting.

The Sweet Hereafter [1997] : The Pied Piper of Hamelin