If “Brevity is the soul of wit” for the original Cowboy Bebop anime, the “Bloat is the bane of its adaptation” for its 2021 remake.

The 1998 seminal anime, developed by Shinichiro Watanabe, consisting of only 26 episodes followed the lives of a bounty hunting crew in their spaceship called the Bebop, taking on jobs for currencies called “Woolongs” for repairing of their ship, to satisfying their hunger for food of all exotic tastes. Famously billed as “genre-defying” Bebop was exactly that because it is a mix of noir, western well as science fiction, mixed in a blender and then topped with themes of philosophical undertones, and existential quandaries.

So the fact that such a genre-defying anime is adapted into live-action format is a question unto itself because when any adaptation from one medium to another is created, the question arises whether it is a necessity, or more importantly whether that adaptation can stand up to the original.

Most importantly and perhaps one of the biggest reasons why this show is still watchable despite its flaws is because original music composer Yoko Kanno returns to provide the score for the remake, and that was the smartest decision made by the creators of the remake because the music had always been an integral part of the soul, a primary essence of the original which is why the adaptation doesn’t feel like a desiccated zombie. While not as blues heavy as I would have liked, Kanno’s jazz infusion in the score especially during the action sequences makes the product feel like you are watching a version of “Cowboy Bebop”. 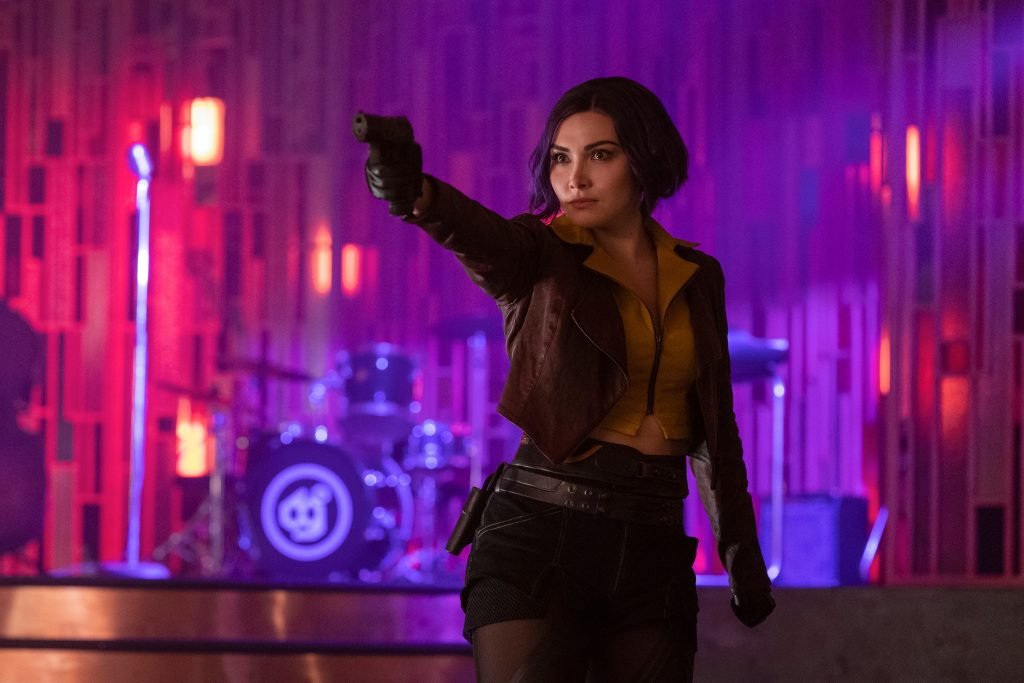 The effort given to this remake needs to be appreciated. On the one hand, along with the production and aesthetics, the performances of the core cast is impressive, to say the least. John Cho as Spike is absolutely brilliant. While not capturing the completely lanky physique and invulnerability of Spike from the original, Cho however is able to capture the cool indifference, as well as the melancholy Spike’s character, has. Mustafa Shakir as Jet Black takes a while to get through, his initial hard-assed attitude feeling stiff, but he soon grows on the viewers as the show progresses primarily because of Spike’s chemistry with Cho and Daniella Pineda as Faye Valentine is so strong. It is Pineda however who is the biggest surprise as Faye Valentine, who perfectly captures Valentine’s volatile nature as well as the humour of her character while introducing inflection of her own.

The structure of Cowboy Bebop as a show is also a marked variation of television as we know it nowadays. A serialized story arc is there, but the procedural format takes precedence, where the crew of the Bebop is informed via an infomercial as to the bounties currently available in the galaxies, and then they divide the tasks at hand to secure said bounty. It’s easier said than done, because of the healthy competition but also the hijinks, which is one of the key differences here. While banter and humour were always in the source material, it was a matter of necessity or limited to its circumstances. Here the banter is more familiar to American audiences, the writing of banter far more along with the writing styles of Joss Whedon than anything else, while the hijinks give it the energy of a live-action cartoon. It’s a different take, but not an entirely unwelcome one because it mostly works if done correctly, and Bebop 2021 does manage to do it correctly more often than not.

However, the famous “Netflix bloat” is a huge problem here. The original anime ran for 26 episodes with a brisk running time of 22 minutes each within which it manages to tell a complete story and the primary arc of Spike Spiegel (John Cho). Here though the show is 10 episodes long of an hour each and it manages to tell at least a third of the story of the original.

The original concept would be the longer runtime would help on telling far more expansive storytelling, and to some extent that is true. It is on which characters the show chooses to expand that the show makes its biggest blunder. It wasn’t enough that Jet Black’s character was an ex-cop in the original, but nowhere he is with an estranged wife and daughter, who is conveniently used as a plot thread in the final act. His interactions with his daughter give off the impression of character development, but it again feels like unnecessary bloat. The big change and where the balance of quality of the anime shifts is the triangle of Spike, Vicious and Julia.

The rivalry between Spike and Vicious was far more effective in the original because Vicious as a character was only present for a third of the anime, but his presence cut a far bigger shadow there on Spike’s character arc. Here to tell the story in a more linear fashion than the original, the writers manage to connect the individual story threads of the bounties to Spike and Vicious’ central rivalry. Giving Vicious more of a backstory throughout the first season is an admirable addition to the mythos, however, in execution, it falters because the backstory manages to demystify Vicious into a hotheaded assassin prone to temper tantrums. His central rivalry with Spike slowly becomes harder to buy because Alex Hassel’s take on Vicious as a hot-headed impetuous uncontrollable bastard is a sharp contrast to John Cho’s cool and indifferent Spike, forcing us to wonder whether Vicious is really that capable enough as a big bad.

Also, Read – 7 Films To Watch If You Like Red Notice On Netflix

The show’s insistence on giving Julia more agency too somehow works in the opposite way, as a result of which that entire central rivalry and the entire focus of Episode 9 becomes the weakest point of the whole show. It’s a shame because Episode 9 also contains the strongest example of showing Cho at his physical best in conveying Spike’s agility and ruthlessness while fighting. There is also an impressive sequence of Spike and Julia connecting together and spending the night, edited beautifully with Vicious burning down a gang lord. It looks cool visually but from a character standpoint it fails to make an impact, and Alex Hassel’s hammy acting this side of Eddie Redmayne in Jupiter Ascending doesn’t help matters.

It’s very hard to judge this show by its own merits because its flaws only get amplified by how its corresponding storylines in the actual source material does it far better. However there are some changes that do work for the better, and the remix or recutting of the show by changing the timeline of characters meeting with each other helps it to stand out from the source. If too faithful, that would be repetitive, if too different it completely misses the point. But by almost painstakingly maintaining the aesthetics and vibe of the source material, the show and creator Andre Nemec and writer Chris Yost does impart this impression – Even for a cash grab, they are doing their damndest to try. At their best, this live-action of Cowboy Bebop does manage to have its own charm while the changes to the source material cause the show to branch off in interesting new directions, even though its focus on neon heavy production sets in a few of the action set-pieces does cause you alarm.

And at the end of the day, the visual rendition of “Tank” by Yoko Kanno being different doesn’t change the fact that it is still Tank playing. Episode 4 ends with “The Real Folk Blues”. This is a new cover of Cowboy Bebop, an alternate take of Cowboy Bebop, but it is most definitely Cowboy Bebop, and as a Bebop fan, new Bebop is always exciting.