Arjun Reddy Review – In an environment of rising awareness against patriarchy and the increasing importance of equality, gender sensitization, and the need to tell boys to behave, Arjun Reddy shines as a bold attempt indeed to not cater to the demands of the society and serve what has been prevalent since ages.

The immense critical and commercial success of Sandeep Vanga’s directorial debut Arjun Reddy invited Kabir Singh in the north and Adithya Verma in the south. Shahid Kapoor has robed himself as Vijay Deverakonda-esque Kabir Singh, much on the director’s vision, and people are speculating whether they’ll get to see a Shahid Singh or Kabir Kapoor or Vijay Deverakonda aka Arjun Reddy.

It is alarming, rather vile, to see the people cheering, defending, and/or hailing something such as Arjun Reddy as a masterpiece in cinema. Tollywood enjoys a strong cult for twisted reasons. Arjun Reddy differs from the lot in a lot of aspects which could be the reason people see it as a path-breaking work of art. Or it could be because some people share the sensibilities and are tired of living in what they call a “politically correct environment.” Almost all the people liking, recommending and raving about the film do not leave the opportunity to remind others that a film must be seen as a film, and any idealistic approach should be kept in a bucket of ice, much like Arjun Reddy’s libido. But the thing is, you can’t. 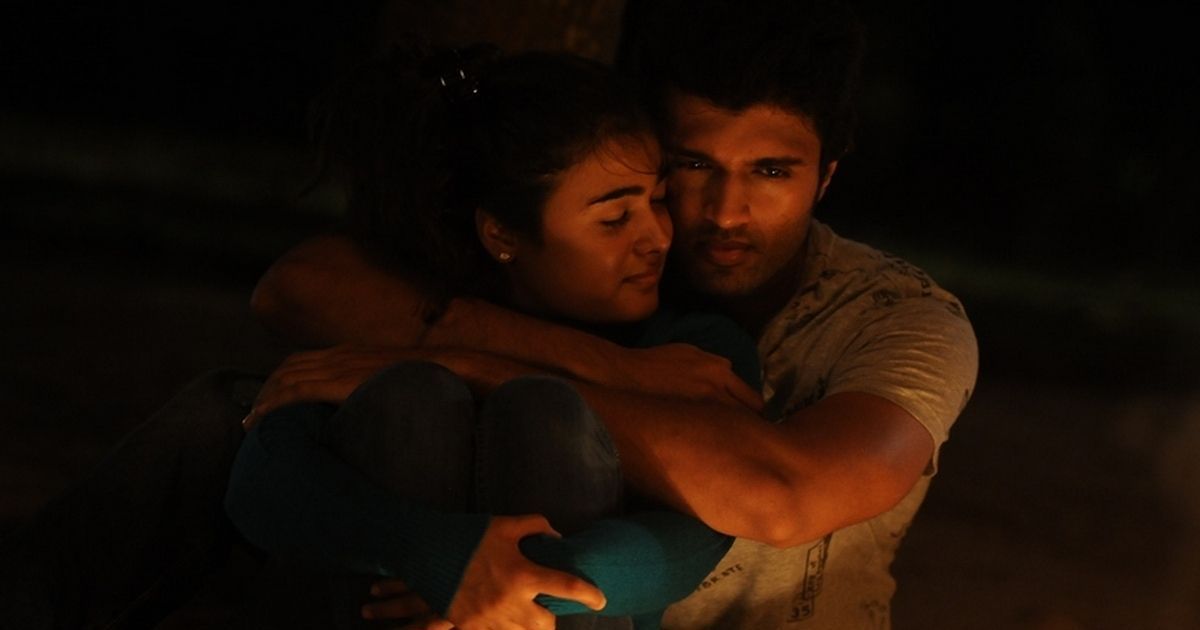 Now, I don’t disregard Arjun Reddy entirely. It’s a brave attempt to shoot a film and serve the audience with the entire reel (apparently 186 minutes long). It does not pierce our ears, already bleeding from everyday remixes, with minimal background score is another one.

Arjun Reddy has its share of bright colours. One of them, which I personally love the most, is the use of unconventional elements in its screenplay. Dialogues sound less scripted and more like responses to different situations. A very ordinary love (read obsession) story feels grounded due to its realistic setting. You won’t see your hero fighting with the goon for long. The goon would stop fighting to smoke a cigarette and shout a curse, himself. You will definitely see a long stretch of a repetitive argument of our hero and his girlfriend or rather say, a long stretch of a repetitively pleading girlfriend only to get slapped by our hero in the end.

Our hero is a rebel without a cause contrary to his claim. There are some brilliant episodes, carefully placed by the director, which take us into the realistic realm and bring us back to Reddy’s self-destructing path without disturbing our suspension of disbelief, and that’s where the director earns full score. One such scene worth mentioning would be the chase scene of Reddy’s help by Reddy himself as she breaks a glass. The string of such episodes, some pleasant, some unpleasant, cumulate into a surprisingly brilliant character arc of Arjun Reddy which is why he boasts of tremendous potential as a character on papers but, alas, comes out bloated on screen.

Advocates would argue that it’s just how the character is, which the critic in me can clearly see, but indigestion seethes in with the fact that the girl is not meant to be the plastic doll she is made out to be. She doesn’t utilize her voice, nor does she repent anything actively. Even a passive resistance remains absent and ignored throughout the screenplay and the victim appropriates abuse herself. A cheering audience ultimately hugs an Arjun Reddy being hugged by a crying Preethi Shetty. It’s only now she gets a name for she remains a mere plot device till she actively starts to love Arjun Reddy back.

The “very different from the lot” film doesn’t fail to reinstate the “already reinstated a million times” idea that the girl will ultimately fall for stubbornness. After all, all metals melt and all stones break. The usual convenient reduction of a human in a woman to an object is as appalling in this film as it was in any film 20-30 years back. In an environment of rising awareness against patriarchy and the increasing importance of equality, gender sensitization, and the need to tell boys to behave, Arjun Reddy shines as a bold attempt indeed to not cater to the demands of the society and serve what has been prevalent since ages.

It’s completely okay to visualize and portray a high-functioning alcoholic with anger issues who, at the different instances in the film, comes out as a nymphomaniac and a narcissist. What’s not okay, however, is the glorification of the attitude which our hero boasts of. It is understandable that a work of art is subjective but Arjun Reddy takes a sublime approach. The protagonist calls out on misogyny while practising the same behaviorally. He utters a body shaming narrative like a fact and has a perplexed sense of rebellion, of which we never find a cause, contrary to his claim as stated.

The film only gets problematic as it progresses. You have Arjun Reddy laying his eyes on a fresher, almost ragging her, and dictating others from not ragging her thereafter. Then you have him choose friends for the girl. Then you have him taking out the girl for classes and since he’s a topper, we, as an audience, are made to assume that he taught the girl with finesse.

While we assume, pedagogy dies a thousand deaths. This is followed by him calling the girl ‘his girl’ which is succeeded by bringing the girl in his vicinity. There is absolutely no voice provided to the girl in the procession until she reciprocates with love. Pellucid harassment gets justified through intimidation and appropriated with reciprocation.

Filmmakers need to realize that people ape. Majority of us are gullible. The idea of a rowdy angry young man fascinates young boys. What you make fuels their fascinations. They take your movies home. They may explicitly say that they took your film as a film, but the changes are reflected in the long run and necessarily so. It provides them with a credible piece of visual media as a tool to validate their inappropriateness. Idealism is not sought when we talk about cinema, but sensitivity can always be asked for.

The spectrum of human personality is vivid, and it is within this spectrum fall all kinds of disturbing characters. From ‘Buffalo Bill’ and ‘Anton Chigurh’ through ‘Faizal Khan’ and ‘Louis Bloom’ to ‘Janardhan’ and ‘Mike Shiner’. Arjun Reddy can fall anywhere. Arjun Reddy is allowed to. What’s not appropriate, however, is absolute appropriation. Let the grey receive the grey, the hero mould is not essential to your protagonist’s existence.

[Watch] The Unexpected Popularity of RRR in the West Explained