Scattered Night 흩어진 밤 – Sumin and Jin-ho are siblings living together. Their parents declare to them that they will divorce soon. They say that it is not decided yet how the four members of the family live apart and ask them to wait for about 2 weeks. Sumin spends every day worrying about which parents she’s going to live with and whether she will live apart from Jin-ho. One day, her parents offer her a suggestion.

We, at High On Films, had the opportunity to conduct an interview with the film directors Sol KIM & Lee JIHYOUNG. 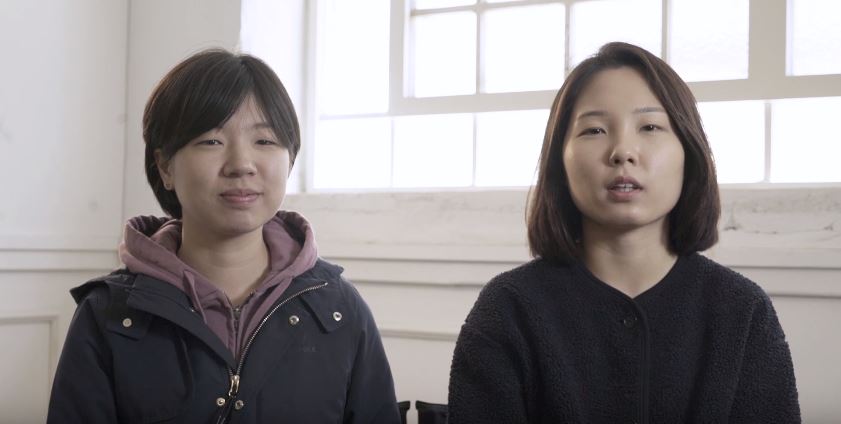 Q –  Your film narrates the story of a dysfunctional family at the juncture of breaking up. In a way, it deals with the existential question of what now? What is your inspiration behind choosing this particular story to tell for your debut venture? How did you prepare for it, is there an element of the autobiographical in it or someone you knew?

Jihyoung Lee: This film started with what I wanted to talk about. Family is a very important issue for me as a writer. It’s a subject that can always touch my mind, so it’s natural to be the subject of my first feature film.

My family was not disbanded like the family in the film. But there have been events that have shaken the bonds, the beliefs of family members. (I think that’s what a lot of people would think.) By the time I was the age of the protagonist Sumin, the image of my family was stronger than the notion of community, as a group of people doing their jobs. I think I wanted to express my vague and difficult feelings about my family. I wanted an audience to have the question, “What can I say about my family?“

The story in the film is not completely my story. It’s made. But the details are half as much from the experience as I’ve seen and heard. I’m a person who wants to remember a lot of the moments that make me feel special in my daily life. I like to transform those moments to function to the purpose of each scene.

Jihyoung Lee: The Squid And The Whale(2005, Noah Baumbach), like this film very much, and the feeling it gave me had a good influence on writing ‘Scattered Night’. The Squid And The Whale, the film deals with the intuitive feelings of characters in a disintegrating family. The film’s episodes don’t damage these intuitive feelings. It keeps the emotions going. I’ve looked at this feature of this film.

For imaging, I referred to the Dardenne brothers ‘Two Days One Night(2014)’ and ‘The Kid With A Bike(2011)’. When I saw the Dardenne brothers’ interviews about acting, I even imagined their style of acting. But in the end, acting is what the directors and the actors were chosen for this film(Scattered Night) do. I figured out the characteristics of the main actors in this film(Scattered Night), and I talked to the actors and gave them the vibe they were looking for. I hoped that each character would have a natural feeling and anxiety that seemed unprocessed.

Sol Kim: And the filming concept and co-production were much referred to in the case of the Dardenne brothers. First, for filming concepts, see <The Kid With A Bike(2011)> and <Two Days One Night(2014)>. We used hand-held, which is widely used in the Dardenne brothers, in our movies, and decided that hand-held was better for quick filming due to the limitations of production costs and to express the anxiety of Sumin. At the beginning of the movie, we wanted to use wide-angle lenses and shake characters in a way that moves a lot on the screen, and in the second half, we wanted to use a telephonic lens that made people feel much wobbly as we shot mainly Sumin. So as the movie progresses, we wanted to make the audience follow Sumin’s feelings more.

In addition, the Dardenne brothers’ directing style was much referred to when it came to co-production. Once location hunting, casting, etc. were carried out together in the pre-production, but when it was unavoidably necessary to share roles and concentrate, Jihyoung focused on the scenario and I focused a little more on other pre-production. And when it comes to the field, we referred to Dardenne brothers style, that one person was in charge of acting and the other was in charge of imaging. Before joining the scene, Jihyoung and I decided to divide the roles so Jihyoung will be in charge of the acting director and I will be in charge of filming. (However, we were naturally forced to pay attention to each other’s territory when we were watching one monitor.)

Q. Since Jihyoung wrote the screenplay, she was the one who conceptualised the idea on paper, and she has her own version of the film in her mind. Where there any creative differences while filming and how you dealt with it?

Jihyoung Lee: The film’s imaging concept is the way I preferred it. Camera in a hand-held, mixed with fixed photography and following. I’ve gradually narrowed the distance to the main character.

We’ve discussed and agreed on the imaging of all the scenes. Of course, there were different parts. I think the scenes should be economical and effective. And Imaging should give strength to the epic. ‘Scattered Night’ was filmed in a way that doesn’t break the criteria of judgment above and the uniformity of the image that the film has been working on.

Q. The film predominantly uses visual narrative rather than dialogue, was it a conscious choice? And what inspired you?

Jihyoung Lee: I think ‘Scattered Night’ puts more emphasis on dialogue than on visual narratives. So this question is interesting. Of course, there are some scenes where visual narratives emphasize emotion and metaphor.

In the ‘Scattered Night’, on the day of my grandmother’s death, Family go to the tombstone and in front of the tombstone, which is strewn with apartment lines. It’s a metaphor that families have existed in history for a very long time, even as the world changed, and that although there was a good side to them, the structure of the family can also afflict the family members themselves.

The drone scenes also have emotions, and the images of the children watching the drones fly are a vivid delight for the children. And then in the second half, Sumin expressed his dissatisfaction with his parents by flying the drone quickly. The emotions of this scene depending on Sumin’s facial acting and the fast flying of the drone.

In the last scene of the family meeting, we wanted to capture a shot of a family individual and represent a divided family.

And the most important last scene, the ending that you see when the camera is panned, contains a definite metaphor, and this is the intended visual narratives. Through visual narratives, I wanted to convey the feeling of awkwardness and the future of this family being separated from each other.

Rather than the visual narratives, I wanted to say that I thought a lot about what the characters should say and the dialogues. I’ve changed a lot of uncomfortable words with actors, making them say things that are more vivid. I’ve been thinking that what’s happening in this house is conveyed through dialogues, and it’s interesting to me that you’ve seen visual narratives as important.

Sol Kim: Well, I think many of the people who watched the movie said that Sumin’s face and expression are impressive, and I guess that’s why you feel this film is imaged. Anyway, the movie is about Sumin continuing to ask her parents questions and continue to wonder what will happen to her brother Jinho. As Jihyoung said, some parts have more emphasis on the image.

Yes, the scenes in which the image was emphasized are consciously intended. I think it’s more attractive to make the audience feel by showing it than by explaining it. That was what the professor, Ki-Yong Park, emphasized at school (‘Scattered Night’ is a graduate work of both of us), and I think as we can see in other directors’ films, it’s a sophisticated way of expressing something in a human body’s gesture in a certain space rather than through lines. l think this is a feature, advantage and discrimination that movies have, unlike other arts and this is ‘cinematic’. Therefore, I wanted to show them with images in the necessary areas.

Q. In your directorial debut, you chose to work with children where the devastation and dilemma unfold through their eyes. How did you get the performances out of children on such a sensitive topic?

Jihyoung Lee: I explained to the child actors who played siblings about the situation in this house, the emotions of the characters in the scenario. What I’ve learned since then is that it doesn’t matter much to ask child actors for this explanation and understanding.

The actors and actresses who play brother and sister have different family circumstances. The situation in the scenario may not have been understandable.

Q. Was it a deliberate attempt on your part to leave the story open-ended? in the universe of the film, beyond the celluloid what do you think happens in the life of these children?

Jihyoung Lee: Yes, the last open-ending is intended. In previous versions of the scenario, the days when the siblings returned home after running away from home are depicted. Sumin will live with her father and Jinho with her mother. And siblings meet outside and ask each other how their daily lives are these days. At that time, siblings feel distant from each other.

The reason for the open-ending was that I thought the audience would be able to fully imagine what would happen after the siblings returned home from the current image of the wall of the film’s open-ending.

I wanted to make sure that the future of this family, which cannot be met as a real team, was delivered to the wall of the open-ending. Then, the story after the siblings run away from home is a side story. I deleted it because I felt there was no reason to exist in the scenario.

Sol Kim: Yes, it’s a film that follows a child’s psychology throughout the movie, with no plot complicated. That’s why each person’s feelings were more important than what happened after the incident (around the end of the story) throughout the movie. Wouldn’t anyone who saw the movie expect the same ending, as Jihyoung said? I don’t think it’s that hopeful. Mom and Dad are getting divorced, and Sumin and Jinho will be meeting once a week as they are now. So I thought it would be better to boldly skip the story behind it.

Scattered Night (2019) is an intimate and intricate portrayal of a collapsing family seen through the eyes of naive but smart Sumin. It doesn’t succumb into providing straightforward answers to an emotional quandary. Continue reading the review.

Pachamama Netflix [2019] Review - A Spirited Tale of an Adventurous boy