The point is not to avoid war, but to win it. This is the argument which the new Amazon Prime original series ‘Good Omens’ attempts to satirize. But, again, the series is an adaptation of Terry Pratchett and Neil Gaiman’s 30-year old book of the same name. So, the satire is punctuated by characters and iconic events right out of The Bible. Only, the entire thing is hilarious and is sure to make the average viewer double up with laughter and overwhelmed with amazement.

In order to be engaging and layered, storytelling needs to have the beliefs of the central character constantly challenged by an equal but opposite character. What better way to go about this, than pitting an angel against a demon? The two central figures of ‘Good Omens’ are Aziraphale, an angel, played with oozing charm by Michael Sheen clad perpetually in white, and Crowley, a demon, portrayed with funk and swagger by David Tennant, always dressed in black. The only problem is that both of them share a forbidden friendship.

Also on Amazon Prime: Arjun Reddy [2017]: Rebel Without a Cause

With the biblical Armageddon as an end point, the story progresses through how Aziraphale and Crowley work their way through centuries of existence since the creation of man, until the birth of the Antichrist incites tensions and triggers moral questions. From the troubled ‘delivery’ of the Antichrist to the final convergence of the salient characters in the quaint English village of Tadfield, every set piece is constructed with sprinkles of humour and dollops of special effects, inspiring unabashed exhilaration. 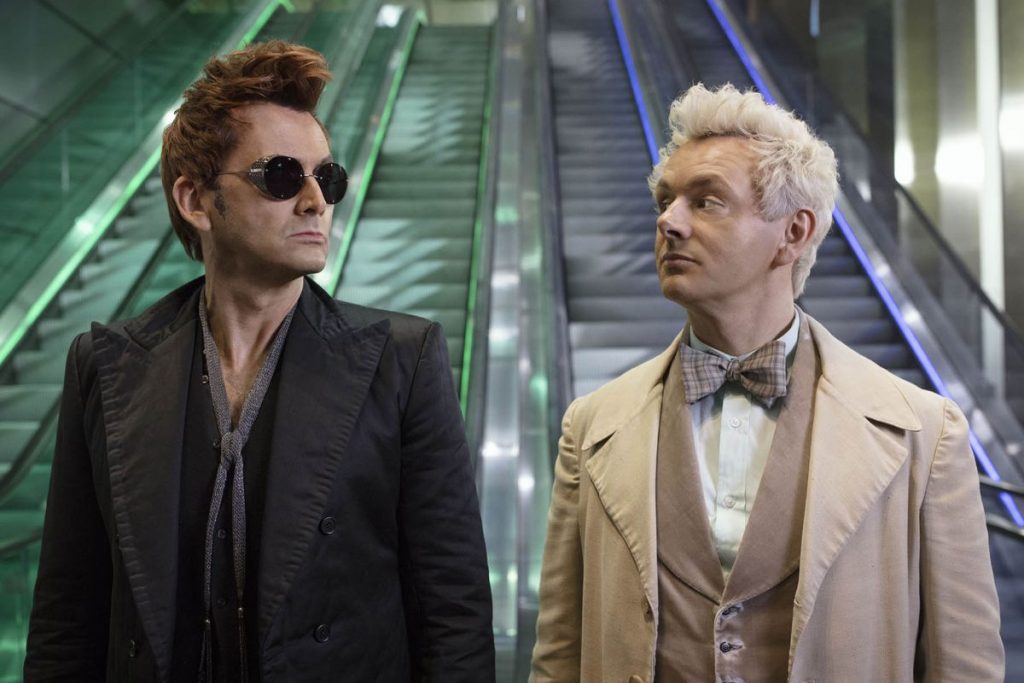 Both Aziraphale and Crowley are constantly censured by their respective ‘head offices’ for fraternising with the opposition and being inefficient in their respective jobs of spreading good and evil among the Earthlings. By establishing a contrast between Heaven and Hell, Gaiman, who has written for the screen as well, ultimately goes on to reflect upon how both the entities are merely two leaves of the same branch. Even Heaven, which is supposedly the good side, is bent on winning the war against Hell and settling scores, rather than averting it. Archangel Gabriel, whose character is fleshed out in the series, essayed by a crisply suited Jon Hamm with a well-maintained coiffeur, talks incessantly about the ‘Great Plan’ which mandates the war. ‘Good Omens’ does well in bringing out the humour in the sacrosanct and unquestioned. Moreover, the humour comes with exclusively 21st century images of technology, knowledge and style. An army man is seen reading Neil Gaiman’s ‘American Gods’ in an instance of reflexive presence of the creator.

In Which We Recommended A David Tennant Film: HOF Recommends 4th Edition

Powerless agents trying to stop destruction, while the authorities prepare for rampage, is a metaphor that can’t be more relevant in troubled times like now. In reality, there is neither any angelic nor any demonic intervention in the scheme of events. It is humans who decide how they want to chart their course. This inevitability of human duality, is even hinted in the series. Aziraphale and Crowley have somehow incorporated human flaws in them, leading to their moral disagreements with their authorities. If it is humans can bring about nuclear apocalypse, it is only humans who can broker peace and harmony. Aziraphale even goes on to say that the Antichrist, under the influence of humans, is neither ‘hell incarnate’ nor ‘heaven incarnate’ but ‘human incarnate’. Under the garb of outstanding visual effects unthinkable even five years back, caustic humour and prophetic unfolding of events, ‘Good Omens’ is a tale of hope and optimism. The makers expand the form and scope of narrative only to bring home the undeniable truth of unbridled and liberating existence, unencumbered by prophecies or plans.

‘Good Omens’ is an outstanding achievement in both comedy and literary adaptation. The British, who are proven masters of the comedy genre, in their unmistakable precision, present a brave production of unprecedented contours. At least, it is a relief for people who had already read the book that they had been pronouncing ‘Aziraphale’ and ‘Crowley’ correctly for 30 years.

If You Liked Reading about Good Omens, You Must Check Out:
The Brand New Testament