In 2008, Marvel was not really big to the casual audiences. They just had Hulk, Spider-Man, Fantastic Four, and X-Men as prominent names. However, they expanded into their rich treasure trove and made lower-tier heroes mainstream. This was with engaging content that had a mass appeal and slow world-building. Marvel’s success saw DC rush and fail, but gave the company a formula that it seems to have finally begun exploiting with an ex-Marvel man in James Gunn at the helm, starting with Peacemaker.

Akin to Marvel, who came out with Daredevil, Jessica Jones, Luke Cage, Iron Fist, Hawkeye, Falcon and the Winter Soldier, Wandavision, and Loki; DC took the TV route and seemingly nailed it with Peacemaker.

The studio delved into its rich coterie, presenting content that was a departure from their usual offerings, and the team-ups weren’t being rushed. They even toned down the brooding nature, but got a balance of fun, without shying away from being Rated-R.

Don’t act surprised. This unapologetically brash show was always going to be that, as it didn’t baulk at displaying the aftermath of a human body exploding. The series isn’t averse to expletives, brutal fight scenes, or even the usage (over usage) of the f-word.

We see Peacemaker brutally savage people, and the man in the chair gets his redemption as something way more.

Peacemaker, starring John Cena, Jennifer Holland, Freddie Stroma, Danielle Brooks, and Robert Patrick; picks up from right where we left off in The Suicide Squad (2021). John Cena’s character survived the climax and is recovering in the hospital. While he assumes his actions have gotten him off the hook, that unfortunately isn’t the case, as he still has a bomb in him. This ensures he gets roped into a mission to eliminate the butterflies. You’ll see that it isn’t a fresh concept entirely, rather it’s a fresh angle to a theme in the DCEU. 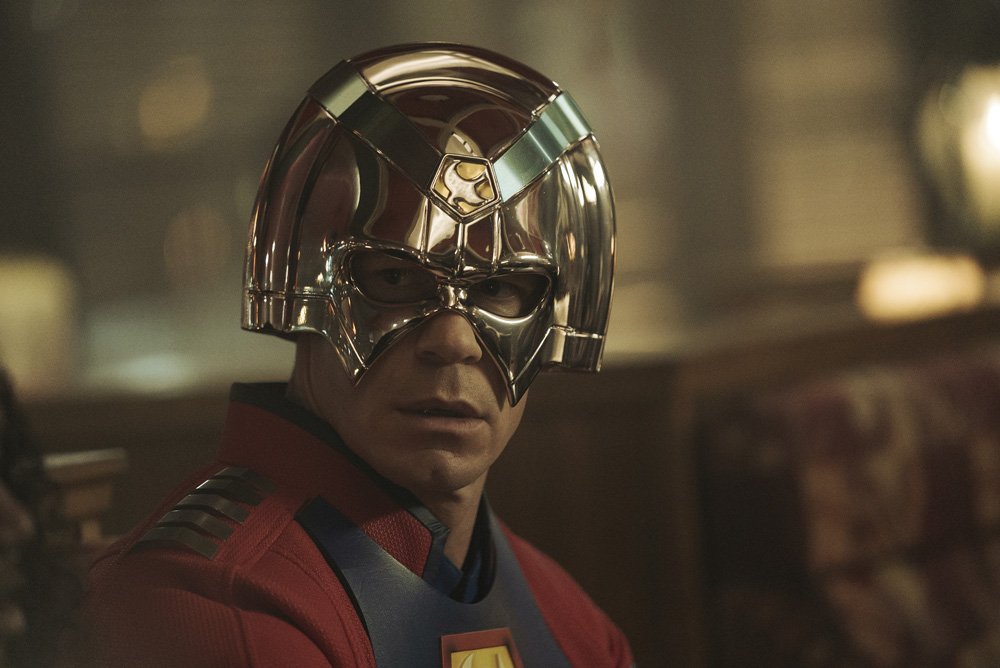 John Cena’s character of Christopher Smith is someone who cherishes peace with all his heart, irrespective of the number of people he needs to kill to get it. Quite a bizarre claim, but that’s what he unapologetically is. Peacemaker is jingoistic and not socially correct. In one scene, he reminisces, ‘The good old days where you could nonstop fuck around with someone without them claiming to be a victim.’

Cena’s character is exactly what WWE fans have been craving to see in the ring for the better part of the last decade. The WWE legend broke kayfabe in a huge way in his latest Hollywood project. His trash-talking, foul-mouthed, live by his own rules anti-hero persona sees him troll his own team. He even talks smack about Justice League members Batman and Aquaman; while dissing the Joker and explaining why he doesn’t have a coterie of villains.

While Cena’s departure from his colourful Hustle Loyalty and Respect character is praiseworthy, there needs to be a special mention for James Gunn for his writing. He has the characters troll professional wrestling, and diss almost every celebrity possible in a rant. Cena retains some elements of his WWE character, but Gunn ensures that what goes on screen is presented in a manner that assists Smith to advance his weirdly twisted peace mission. There is no change of heart, but he does tone down as part of his character arc.

After seeing Peacemaker work with his A.R.G.U.S. ‘soldiers’, you kind of get why he has such a bond with Eagly. This is the creation of Gunn, who absolutely steals the show. Audiences set their sights on him in the opening theme sequence, and his affectionate buddy scenes with John Cena are the highlight of Peacemaker.

It reaches a point where you begin to love the bald eagle and root for him, without (in the tone of the show) giving a fuck about anyone else. Nothing should happen to the bird. Peacemaker’s pet and best friend is pure CGI and steals the show, as is evidenced by numerous articles (to cater to the SEO) queries regarding Eagly being a real bald eagle.

Vigilante is a superhero, but he comes across as a representation of the stereotypical sidekick, who wants to be a superhero and says all the wrong things. It is due to this character that this series gets some more amusing moments. Freddie Stroma, of Harry Potter and the Half-Blood Prince fame, is a template masked vigilante, who has a standard name, a standard costume, and makes all the errors. That ring tone and his outfit and tone reminded me of a toned-down version of Deadpool if Wade Wilson couldn’t regenerate.

Even if the characters may not click in the Justice League scheme of things, Gunn ensures names like Harcourt, Peacemaker, and Vigilante will get a cult following. One character that won’t, is Patrick’s White Dragon. A pure heel who has a flag like the one in the House of Cards opening credits, Robert Patrick’s character is a bigot, a racist. He surprisingly made me lose sight of Eagly for a bit, as he needed to go. The veteran actor may have finally found a character that the audiences despise more than his T-1000 is one of James Cameron’s greatest films, i.e. Terminator 2: Judgement Day. At least, he wasn’t discriminating on colour and region there. More than the butterflies, Dragon is the antagonist.

Peacemaker is streaming on HBO MAX

IF Peacemaker (2022) ISN’T AVAILABLE FOR STREAMING IN YOUR AREA, WATCH IT BY USING EXPRESSVPN. IT’S FAST, SECURE, AND UNBLOCKS PRIME VIDEO, NETFLIX, HBO MAX, AND PRETTY MUCH ANY OTHER STREAMING PLATFORM. HERE ARE SOME EXCITING DEALS FOR YOU.

It was good to see someone completely bad in an era where good has bad and bad has good.

In a show with such heavy action involving superheroes, or rather super-powered beings, it was quite nice to see that powers were not over-exaggerated. It was also quite odd to see slow-motion takes not being overused. Do fight scenes actually get made like that?

The stunt choreographers came up with interesting techniques for fights and unique counters that Cena could take to the ring. Who knew ground and pound could be counted in that manner?

As a show, Peacemaker will be a tad troublesome to binge-watch as it was made with the intention that you watch it across multiple sittings rather than the Marvel way which rewards a binge. This is something that this generation needs to relearn, as streaming has taken away the joy of watching and speculating about what’s next in the middle of a season. It is something from the old era that needs to be relearned, but, of course, Peacemaker provides a stark reminder of why some things from the old era must never be relearned.

Even so, for those who do not want to read deep and just watch a show for the sake of watching it, these messages aren’t shoved in your face. They exist and function without taking away the perception that it is a badass hero beat villain show. And that’s all we want right, watch something, use it as an escape, and enjoy it. In the words of Wig Wam’s theme, ‘Do you wanna taste it?’ You absolutely do.