The technological age and the advent of artificial intelligence is a boon, but is it dangerous? You talk to your devices; the devices have literally everything on them. Of course, you save it there for a reason, but those few clicks of something you didn’t bother to read completely change things.

Artificial intelligence will not forget what is said. Anyone can access it, and should anyone want to do something about it; the cycle continues. Set amidst the coronavirus pandemic, KIMI produces a timely reminder to keep those video cameras off. It’s dangerous, unless, of course, you are a stickler for the fine print. It’s scary when you begin using your grey cells after consuming KIMI.

However, it isn’t only against technology as this 90-minute cyber-thriller does enough to present both sides of the technological boom. How could someone with acrophobia survive without it, and would the truth about Samantha be known in Steven Soderbergh’s film?

KIMI focuses on 20 something-year-old Angela Childs (Zoe Kravitz) who works as a software correction expert with Amygdala. Her job is basically to listen to the voice streams of KIMI (a play on Siri, Alexa, Google Assistant, and Cortana) and enhance any situation where the technology doesn’t get human requests. This scene, where she sorts the first two requests, reminded me of Rush Hour 3 where Chris Tucker’s Carter had a conversation with Yu. However, there is nothing funny about this; perhaps you may laugh if you remember a time when artificial intelligence has misunderstood you. 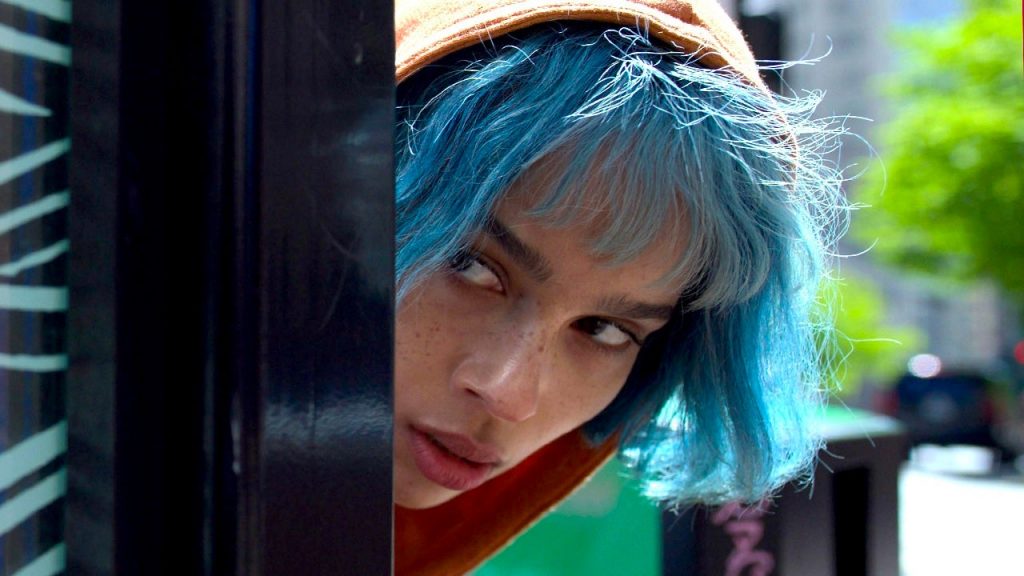 As Childs goes about her work, we get the information about her surroundings, her neighbours, and her window watchers; seemingly normal things that are so important. Steven Soderbergh is a director in control of his material as not a single minute of this thriller, not a single frame in this film goes to waste.

It is such that you don’t feel the 20 minutes that have passed by when Childs comes across a disturbing voice. She deduces something is horribly wrong and tries to get to the bottom of it. Unfortunately, to get to the bottom, she must face her fears and leave her apartment.

Quite a mundane task, but Soderbergh establishes why it is a challenge for his aqua-haired leading lady. In the first 15 minutes, where she tries to meet her friend, she just can’t go out. Kravitz’s acting communicates her fear to those behind the fourth wall, and the set has a prop that serves as a reflection of her inner state.

She has that slight edge to her walk that conveys her phobia well. She isn’t confident to any extent and tries to appear inconspicuous. Her hands, placed flat on her thighs, she keeps leaning towards the side she wants to walk near. Of course, this feat is a tad impossible, as she would stand out anywhere thanks to her hair colour.

IF KIMI (2022) ISN’T AVAILABLE FOR STREAMING IN YOUR AREA, WATCH IT BY USING EXPRESSVPN. IT’S FAST, SECURE, AND UNBLOCKS PRIME VIDEO, NETFLIX, HBO MAX, AND PRETTY MUCH ANY OTHER STREAMING PLATFORM. HERE ARE SOME EXCITING DEALS FOR YOU.

Once she does summon up her will, the cinematography gets chaotic. Peter Andrews’ camera shakes way too much as though he aimed at giving us her feeling of overwhelming sensory overload. You may get dizzy at this point and may need to pause and gather your senses, exactly as Soderbergh intended you to. This is despite you not having acrophobia. It is a task to sit, but what about having to flee?

KIMI’s common human vs giant corporate story is something that can make everyone pause and think about how they are living. The scenes where she deals with a human fear, where she has a friend over, argues with a neighbour, have a chat with her mother, and engages in a consult with a shrink and her dentist out across two pointers, put across the message that Angela Childs is one of us.

This film can be seen as a technological upgrade of Hitchcock films; perhaps a modern-day Rear Window or a sort of a single location film; as it is largely set within a single location, i.e. Childs’ flat.

David Koepp’s writing factors in protests, and very believable and previously unseen elements. It ensures that KIMI feels original. The film’s second half will not be accused of rushing or dragging along to the point where the suspense is broken. The chase sequence isn’t stretched, the final sequence retains the professionalism and the no-nonsense elements of both sides. Also, the initial part of the film doesn’t feel dragged in any way.

While seeming bizarre, KIMI doesn’t challenge reality either in the technology or in the climax. Everything that happens in this film proves to be Chekov’s gun.

Peacemaker [2022] 'HBO Max' Review: Gunn Ensures That Names Like Peacemaker, Harcourt, and Vigilante Will Get a Cult Following