Josep (2020), the feature debut of cartoonist and editorial journalist Aurel (Aurelien Froment), isn’t exactly the biopic of Catalan artist Josep Bartoli (1910-1995). It’s rather a formally innovative animated film that juggles with a multitude of things while also offering a colorful portrait of the activist artist. The most interesting aspect of Josep is the distance it keeps from its titular subject, in terms of both writing and form. Screenwriter Jean-Louis Milesi composes the narrative as a trip down memory lane. Curiously, the narrative doesn’t delve into the memory of older Jose Bartoli, but into the hazy memory of dying Serge, a French Gendarme. Now bed-ridden and suffering from Alzheimer’s, Serge recounts to his artistically inclined teenage grandson Valentin, the friendship he developed with Josep, the latter not only a cartoonist but also a Spanish Republican fighter confined in a French internment camp in 1939.

The entirely fictional characters Serge and Valentin are clearly our way into the story. But there’s more to framing Bartoli’s dramatic life through a comforting yet unlikely friendship. On the aesthetic front, there’s the inventive attempt by the illustrator filmmaker to approach his subject through illustrations. Aurel claims that he first came to know about Josep Bartoli’s drawings in 2010. Subsequently, he was fascinated by the book by Georges Bartoli, Josep’s nephew, which featured the illustrations of the artist. So Aurel chooses to breathe life into Josep through the means of expression they mutually share. Moreover, the drawings of Bartoli himself become central to the story; the different paintings offer a striking snapshot of his life.

Related to Josep: The Endless Trench [2019] Netflix Review – An Incredible Drama on the Living Ghosts of Francoist Spain

The refugee experience and an unsavory chapter in French history are pivotal elements in Josep. More than 50,000 Spaniards and international volunteers fled to France when Franco’s Nationalist Forces emerged victorious in early 1939. The French nation’s complicity in the Holocaust during the Vichy regime (1940-44) is very well documented. But even before Vichy’s shame, the French high command treated the Spanish war refugees of the time in a despicable manner. Josep Bartoli was one of the Republican fighters, who coped with his inhuman surroundings through his sketches. He poured his agony, despair and captured the brutal living conditions in his ghostly, dreamlike pictures. 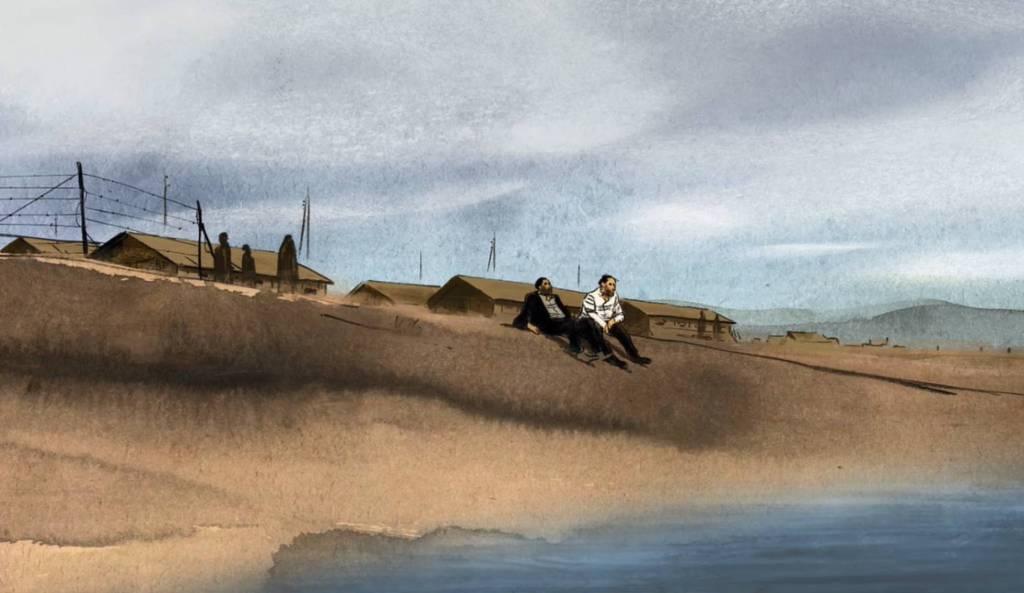 Aurel uses double filters to portray this gloomy reality. One is the unique aesthetics (simple drawing & staccato animation), and the other filter is the not-so-fluid memory of an old dying man. In the sequences set in the internment camp, Aurel chooses to not always animate the characters’ movements. It’s full of still images and dissonant voices, representing the images imprinted in Serge’s failing mind. When it particularly comes to acts of violence inside the camp, the images become increasingly fixed with the discomfiting sounds and voices conveying the brutality of the act. The mise en scene can be related to Serge’s repression of those memories, but this is more than an interesting storytelling choice.

The imagery of violence, however unnervingly precise or condemning, can come across as spectacular. Here without undermining the sad reality of the camp, Aurel conveys the desolation felt by Josep (sometimes utilizing the artist’s drawings itself). Furthermore, sound design plays a significant role. The neighing of the slaughtered horses, dusty wind, echoing gunshots, and heartfelt wailings all come together to create the atmosphere of rancor and suffering.

Josep Bartoli is an enigmatic figure in a way. Not much is known about his life, apart from the oft-repeated details like he was in the internment camp, lover of Frida Kahlo, placed on the Hollywood blacklist, etc. So this literal or figurative view from the other side of the fence is affectingly dramatized by the kindness and friendship of Serge. He risks the wrath of his mean superiors to give paper and pencil to Josep. Serge protects his friend to a point that he first indirectly and later directly facilitates Josep’s dramatic escapes. From here on, the muted colors of the vicious reality is replaced with more vivid colors. The animation too becomes fluid and the illustrations brims with expressive details.

Also Read: The Wolf House [2018]: The Most Inventive & Imaginative Animation of the 21st Century

Josep’s drawings in this phase of life were also filled with life and color. However, from a narrative viewpoint, it’s as if Serge’s mind now fluently cruises through these pleasurable memories. Serge visits Josep during the artist’s brief stay in Mexico when he had a brief passionate affair with the Mexican portrait artist Frida Kahlo. There’s a playful nod to the vibrant and lusty Frida in a couple of sequences. The narrative reaches a full circle when Valentin (Serge’s grandson), inspired by the story of Josep, delivers a graceful gesture.

Films like Josep bring real handmade quality to the animation. The historical part of the narrative is more cartooning than animation, and Aurel states that he had to draw the characters featured in all those shots (which is around 800!). Apart from paying tribute to an artist and withholding resonant political core, Aurel’s journey through a man’s foggy memory in Josep (74 minutes) is simply worth watching for its singular stylistic approach.

The World to Come [2021]: 'Sundance' Review - A poetic telling of forbidden love marred by a lack of focus