At the time when ‘All the President’s Men’ was released, journalistic integrity as a subject was hardly being used in contemporary films. After its release, there were several films that were made from which only a few were able to make an impression like The Insider or Spotlight. While the 1976 classic still feels relevant for its documentary-style approach, ‘The Journalist’ owes a lot of debt to the predecessor’s procedural investigative style. Within the first few frames of the Michihito Fujii’s film, the inspiration was visible. The drama is much more heightened in this new film which made the initial impact about its ethical questions seem a bit muddled. But here, the focus slowly started to shift from the situation to its characters that have something at stake here. The story is loosely based on Isoko Mochizuki’s book ‘Shinbun Kisha’, which is also the film’s Japanese title.

Erika Yoshioka (played by Eun-Kyung Shim), the protagonist of the film, is a Tokyo-based reporter who had spent much of her time in the US for education. For the same reason, she is also being offered foreign jobs for which even her US colleagues found her more than capable. But something was holding her in her home country. Perhaps it was her father’s suicide which caused some unforgettable wounds. He was also a journalist who was framed to be lying after a truth-seeking zeal. It eventually destroyed her father’s career and also his life, which keeps bugging her even now. Because of this, she kept pursuing the stories that could make ‘a difference’ in the journalistic sense.

The conflict begins in the film when Erika receives an anonymous fax containing information about a shady, government-funded school. While her colleagues discredit it as some kind of faux news, she seems determined to pursue this case as an investigative piece. In the process, she comes across Takumi Sugihara (Tori Matsuzaka) who was a lenient bureaucrat working at the Cabinet Intelligence and Research Office.

Similar to The Journalist: AND YOUR BIRD CAN SING [2019]: ‘JAPAN CUTS’ REVIEW- AN ODE TO THE MUNDANE

While being a mere servant for the government all the while, he starts having doubts about the nature of his job and about the way things were being handled at his department after a particular project gets assigned to him. The fabrication of truth on one hand and the duties as a bureaucrat on the other, leave him in a conundrum. A senior of him in the past get in an unpleasant accident which leads these two characters into an idealistic mission. The further developments show their constant internal struggle between being loyal to the government or the hidden truth. 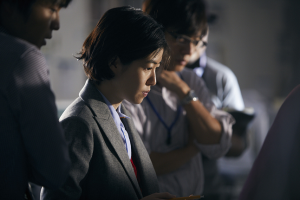 There’s the required amount of tension in the latter half of The Journalist, which turns the procedural take to a crime thriller genre. The cinematography is impactful and purposefully under-lit where the transitions seem smooth and seamless. Even the particularly rapid cutting while unfolding its plot, is rewarding for the realism that it wanted to capture.

Still, the uncanny similarities to even mimicking the aforementioned classic take away the originality from this new film. The performances keep you hooked for sure. Even the universal picture it tries to paint, about the unseen strings that keep imprisoned make it a rewarding watch. But, no matter how idealistic and noble intentions that the makers had while writing the script, the climax, although fitting; doesn’t provide anything different than the genre films. The predictable turns also make you lose interest in the script moment by moment, even after knowing that its heart is in the right place.

As a result, The Journalist offers an admirable view on the objectivity and truth in terms of the current world but ends up short while presenting it as an original take.

The Beach Bum [2019] Review - Freewheeling Poetry of the Excess